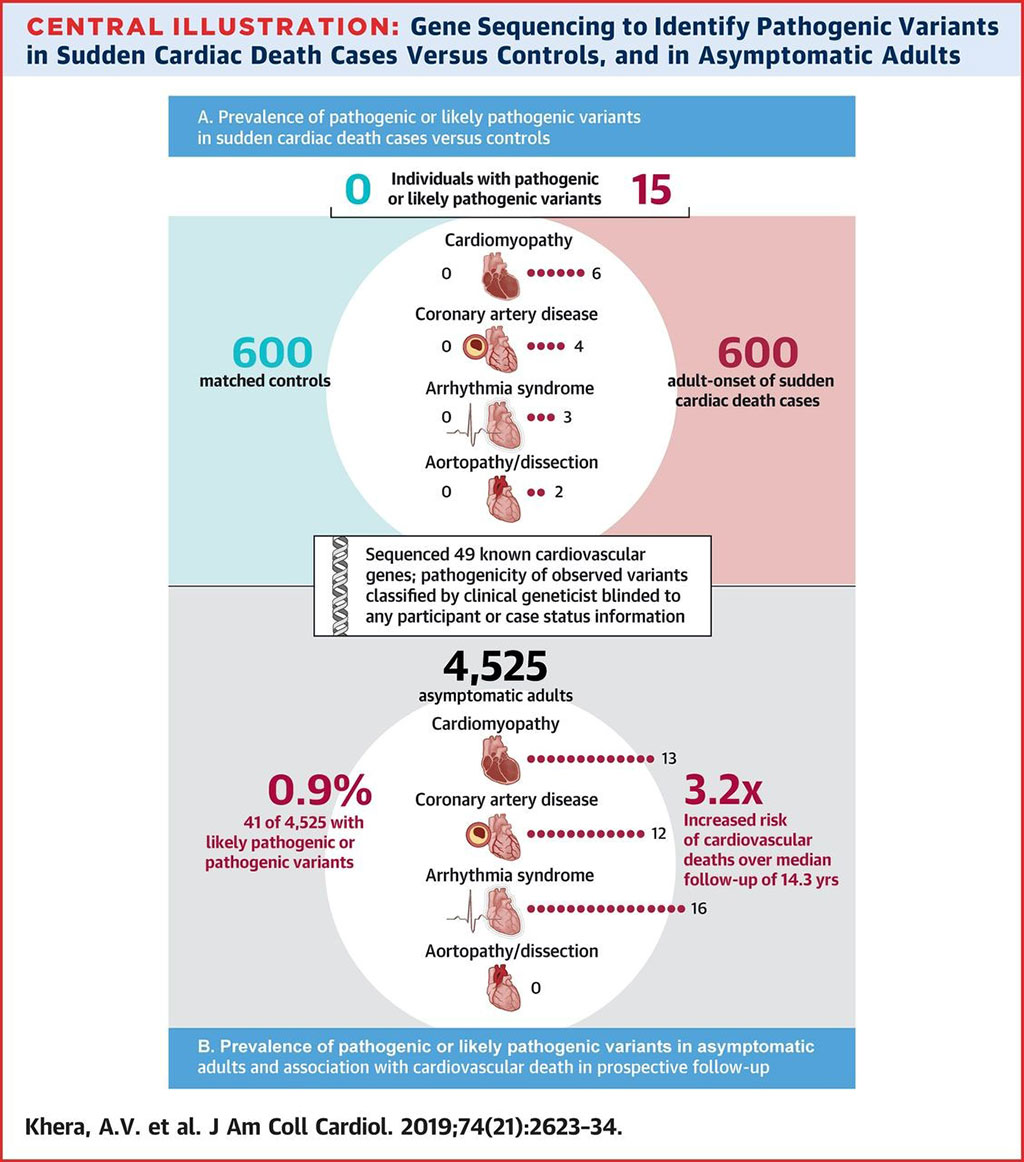 Image: Gene Sequencing identifies pathogenic variants in sudden cardiac death versus controls and asymptomatic adults (Photo courtesy of Massachusetts General Hospital)
A recent study has assessed the prevalence of rare pathogenic variants in sudden cardiac death cases versus controls, and the prevalence and clinical importance of such mutations in an asymptomatic adult population.

Sudden cardiac death occurs in around 220,000 adults in the USA annually, the majority of whom have no prior symptoms or cardiovascular diagnosis. Rare pathogenic DNA variants in any of 49 genes can pre-dispose to four important causes of sudden cardiac death: cardiomyopathy, coronary artery disease, inherited arrhythmia syndrome, and aortopathy or aortic dissection.

A large team of scientists working with the Massachusetts General Hospital (Boston, MA, USA) performed whole-exome sequencing in a case-control cohort of 600 adult-onset sudden cardiac death cases and 600 matched controls from 106,098 participants of six prospective cohort studies. Observed DNA sequence variants in any of 49 genes with known association to cardiovascular disease were classified as pathogenic or likely pathogenic by a clinical laboratory geneticist blinded to case status. In an independent population of 4,525 asymptomatic adult participants of a prospective cohort study, the team performed whole-genome sequencing and determined the prevalence of pathogenic or likely pathogenic variants and prospective association with cardiovascular death.

The scientists reported that among the 1,200 sudden cardiac death cases and controls, they identified 5,178 genetic variants and classified 14 as pathogenic or likely pathogenic. These 14 variants were present in 15 individuals, all of whom had experienced sudden cardiac death, corresponding to a pathogenic variant prevalence of 2.5% in cases and 0% in controls. Among the 4,525 participants of the prospective cohort study, 41 (0.9%) carried a pathogenic or likely pathogenic variant and these individuals had 3.24-fold higher risk of cardiovascular death over a median follow-up of 14.3 years.

Amit V. Khera, MD, MSc, an associate director of the Precision Medicine Unit, said, “This really lays the groundwork to say these are important mutations, and what's exciting is if we can identify them, we have treatments for the conditions to which they are tied. We know each of these diseases tends to run in families and there are genetic variants that cause each of these conditions”.

The authors concluded that gene sequencing identifies a pathogenic or likely pathogenic variant in a small but potentially important subset of adults experiencing sudden cardiac death; these variants are present in ∼1% of asymptomatic adults. The study was published on November 18, 2019 in the Journal of the American College of Cardiology.