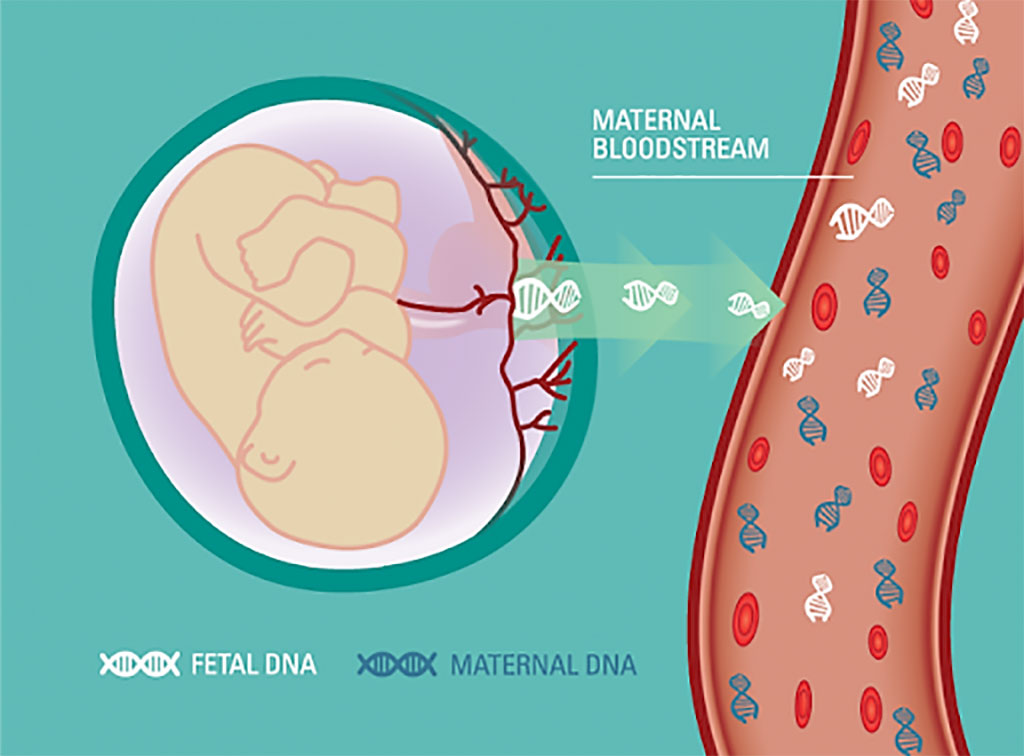 Image: Schematic diagram of fetal and maternal DNA as studied in the detection and characterization of jagged ends of double-stranded DNA in plasma (Photo courtesy of Ariosa Diagnostics).
Cell-free DNA in plasma has been used for noninvasive prenatal testing and cancer liquid biopsy. The physical properties of cell-free DNA fragments in plasma, such as fragment sizes and ends, have attracted considerable recent interest.

This awareness has led to the emerging field of cell-free DNA fragmentomics. However, one aspect of plasma DNA fragmentomics as to whether double-stranded plasma molecules might carry single-stranded ends, termed a jagged end, remains underexplored.

A group of scientists at the Chinese University of Hong Kong (Shatin, Hong Kong SAR, China) and their associates collected blood samples from a cohort 30 pregnant women, as well as from another cohort that included 34 hepatocellular carcinoma (HCC) patients, eight healthy controls, and 17 chronic hepatitis B virus patients. After amplifying and extracting plasma from the samples, the team performed a jagged end by sequencing analysis (Jag-seq) on the two cohorts. The team developed two variants of Jag-seq to investigate the presence of jagged ends in a plasma DNA pool. Jag-seq applies DNA end repair to introduce differential methylation signals between the original sequence and the jagged ends, depending on whether unmethylated or methylated cytosines were used in the DNA end-repair process.

In the first cohort, the scientists used Jag-seq (methylated) to look for differences in jaggedness between maternal and fetal cfDNA in the pregnant women. They saw that the average jagged end length of fetal DNA molecules was higher than that of the maternal counterparts and that fetal DNA was more jagged overall. In the second cohort, they applied Jag-seq (unmethylated) to the HCC blood samples, finding that tumor-derived DNA molecules showed an increased jaggedness compared to non-tumor DNA. While the approach had an area under the operating curve of 0.87, they noted that the method would likely be used in combination with other approaches to aim for even higher sensitivity and specificity. In addition, the team saw that jaggedness varied depending on plasma DNA fragment sizes and appeared to be linked to nucelosomal patterns.

The authors concluded that in the plasma of pregnant women, the jaggedness of fetal DNA molecules was higher than that of the maternal counterparts. The jaggedness of plasma DNA correlated with the fetal DNA fraction. Similarly, in the plasma of cancer patients, tumor-derived DNA molecules in patients with hepatocellular carcinoma showed an elevated jaggedness compared with non-tumoral DNA. The study was published on August 14, 2020 in the journal Genome Research.