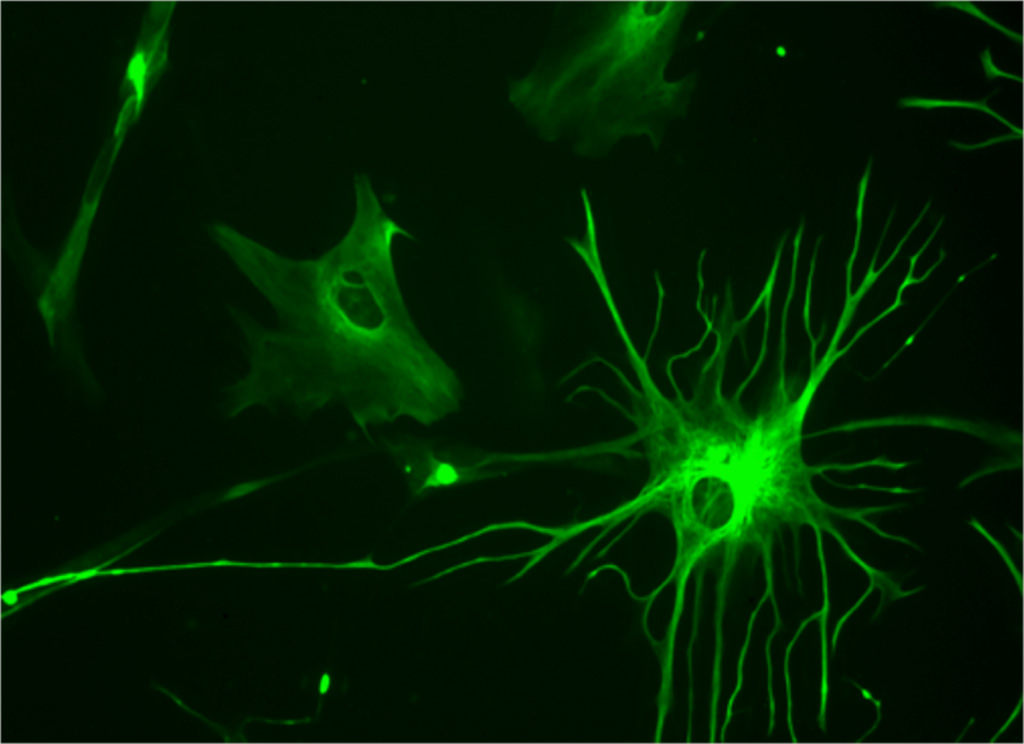 Image: Micrograph showing a human astrocyte growing in cerebral culture. An elevation in astrocyte protein markers was associated with an anti-inflammatory state in brains of patients with Alzheimer’s disease (Photo courtesy of Wikimedia Commons)
A recent study identified proteins and biological processes in brains from Alzheimer’s disease (AD) that may serve as diagnostic fluid biomarkers and potential therapeutic targets for the disease.

For this study, the investigators analyzed patterns of protein expression in more than 2,000 human brain and nearly 400 cerebrospinal fluid samples from both healthy individuals and patients diagnosed with Alzheimer's disease. Brain tissue samples came from autopsy of participants in AD research centers and several epidemiological studies across the country. The brain collections also contained samples from individuals with six other neurodegenerative disorders as well as samples representing normal aging. Cerebrospinal fluid samples were collected from study participants at the Emory University Goizueta Alzheimer's Disease Research Center.

Results of the study pointed to a protein network module linked to sugar metabolism as being one of the modules most significantly associated with AD pathology and cognitive impairment. This module was enriched in AD genetic risk factors and in microglia and astrocyte protein markers associated with an anti-inflammatory state, suggesting that the biological functions it represents serve a protective role in AD. Proteins from this module were found to be elevated in cerebrospinal fluid in early stages of the disease.

"We have been studying the possible links between abnormalities in the way the brain metabolizes glucose and Alzheimer's-related changes for a while now," said contributing author Dr. Madhav Thambisetty, chief of the clinical and translational neuroscience section at the NATIONAL INSTITUTE ON AGING. "The latest analysis suggests that these proteins may also have potential as fluid biomarkers to detect the presence of early disease."

The Alzheimer’s disease proteomics study was published in the April 13, 2020, online edition of the journal Nature Medicine.