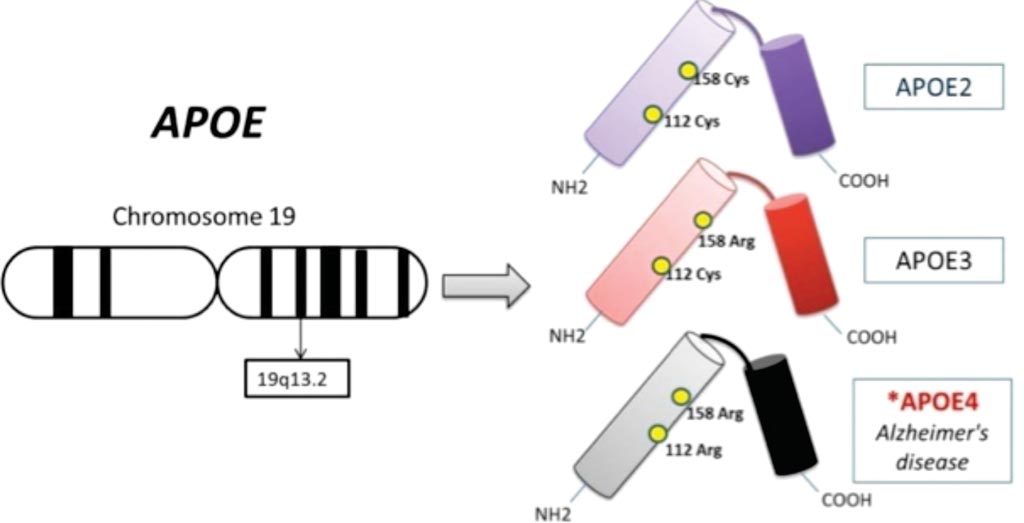 Image: These APOE gene alleles produce slightly different forms of the protein Apolipoprotein E (Photo courtesy of Genaro Gabriel Ortiz, MD, PhD, et al).
Alzheimer's disease (AD), also referred to simply as Alzheimer's, is a chronic neurodegenerative disease that usually starts slowly and gradually worsens over time. It is the cause of 60% to 70% of cases of dementia.

Apolipoprotein E (APOE) is a protein involved in the metabolism of fats in the body. It is implicated in Alzheimer's disease and cardiovascular disease. The gene, APOE, is mapped to chromosome 19 in a cluster with apolipoprotein C1 (APOC-I) and the apolipoprotein C2 (APOC-2).

An international team of scientists led by those at Boston University Schools of Medicine (Boston, MA, USA) examined exome sequence data for 5,522 unrelated individuals with AD and more than 4,900 cognitively normal control individuals, all with non-Hispanic white ancestry. After quality controls steps, they were left with data for 2,377 AD cases and 706 yet-unaffected controls that carried the APOE4 allele, along with data representing 3,145 individuals with AD and more than 4,200 control individuals who did not carry the AD-related version of APOE.

The team attempted to validate potential AD contributors using data for two more cohorts: exome data for another 1,766 individuals with AD and 2,906 without, as well as 8,728 AD-affected individuals and 9,808 controls assessed by array-based genotyping. The team tracked down as many as 22 variants with potential ties to AD risk. From the discovery group and a meta-analysis done in combination with data from the replication cohorts, for example, they saw a potentially protective single nucleotide polymorphism (SNP) at the ISYNA1 locus for those carrying the AD-related APOE allele.

In the APOE4-free group, on the other hand, the team's analysis highlighted potential AD-associated SNPs in AC099552 and in GPAA1, among others, including a variant called rs138412600 that appears to influence the expression of GPAA1 and a related repressive transcription factor called FOXG1 in the brain. In the group of cases and controls lacking the high-risk APOE ε4 allele, the scientists also flagged SNPs with shakier associations in or around genes previously implicated in AD risk, including MAPT and TREM2.

The authors concluded that their study identified multiple possible novel associations for AD with individual and aggregated rare variants in groups of individuals with and without APOE ε4 alleles that reinforce known and suggest additional pathways leading to AD. The study was published on June 10, 2019, in the journal JAMA Neurology.