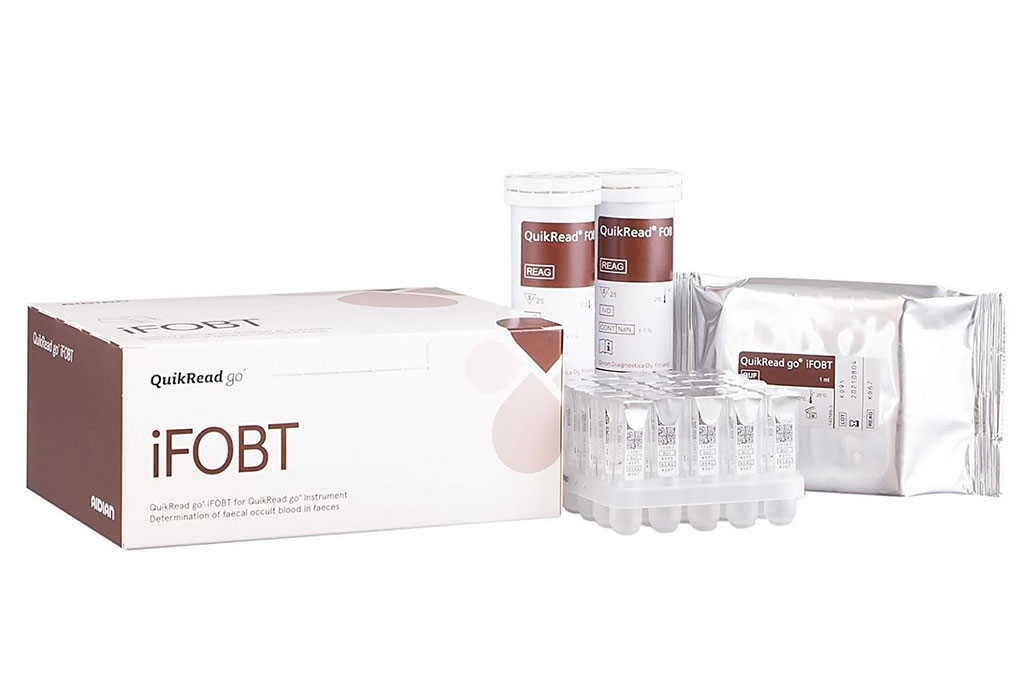 Image: The QuikRead go iFOBT is an immunochemical fecal immunochemical test for detection and quantification of human hemoglobin in feces in case of suspected bleeding from the lower gastrointestinal tract (Photo courtesy of Aidian)
Colorectal cancer (CRC) is a challenging public health problem which successful treatment depends on the stage at diagnosis. Recently, CRC-specific microbiome signatures have been proposed as a marker for CRC detection.

Accumulating evidence indicates that the microbiome substantially contributes to the development of CRC. Cross-sectional multi-population studies in humans in which the CRC microbiome and cancer stage-specific microbial signatures have been detected in the stool samples of CRC patients have shown significant associations between the gut microbiota and CRC.

Genomic Scientists at the University of Tartu (Tartu, Estonia) enrolled 30 volunteers (16 women and 14 men) without known gastrointestinal disorders and who had not taken antibiotics within 60 days prior to sampling. All recruited subjects were Estonians aged between 22 and 68 (39 ± 12.1) years. Seven fecal samples were self-collected by each volunteer, and 214 samples (including positive and negative controls) were analyzed. From each fecal sample, three subsamples from each individual were transferred to QuikRead go iFOB fecal immunochemical test tubes (Aidian, Espoo, Finland).

The investigators reported that all genera expected to be present in the positive controls (Staphylococcus, Pseudomonas, Enterococcus, Escherichia, Salmonella, Lactobacillus, Listeria, and Bacillus) were detected in the analysis. As expected, a Western microbial community structure was observed in all of the sample types, with 90% of bacteria belonging to the phyla Firmicutes and Bacteroides, followed by the phyla Proteobacteria, Actinobacteria, and Verrucomicrobia. The results indicated that the variation between individuals was greater than the differences introduced by the collection strategy. The vast majority of the genera were stable for up to seven days. None of the changes observed between fresh-frozen samples and FIT tube specimens were related to previously identified CRC-specific bacteria.

Kertu Liis Krigul, PhD, a Molecular Geneticist and first author of the study, said, “Current screening programs, however, face multiple challenges, including low participation rates, low sensitivity for pre-cancerous or early-stage cancer, and false positive and false-negative results among others. Consequently, new highly specific, inexpensive, and sensitive noninvasive screening tests that improve the detection of precancerous colorectal lesions and cancer are urgently needed to reduce the incidence and mortality of the disease.”

The authors concluded that their results showed for the first time that QuikRead iFOB sampling set tubes are suitable for storing fecal samples for microbiome studies, as the captured microbiome profile is similar to that obtained from fresh-frozen samples and remains stable for up to seven days. The study was published on October 1, 2021 in the journal Scientific Reports.