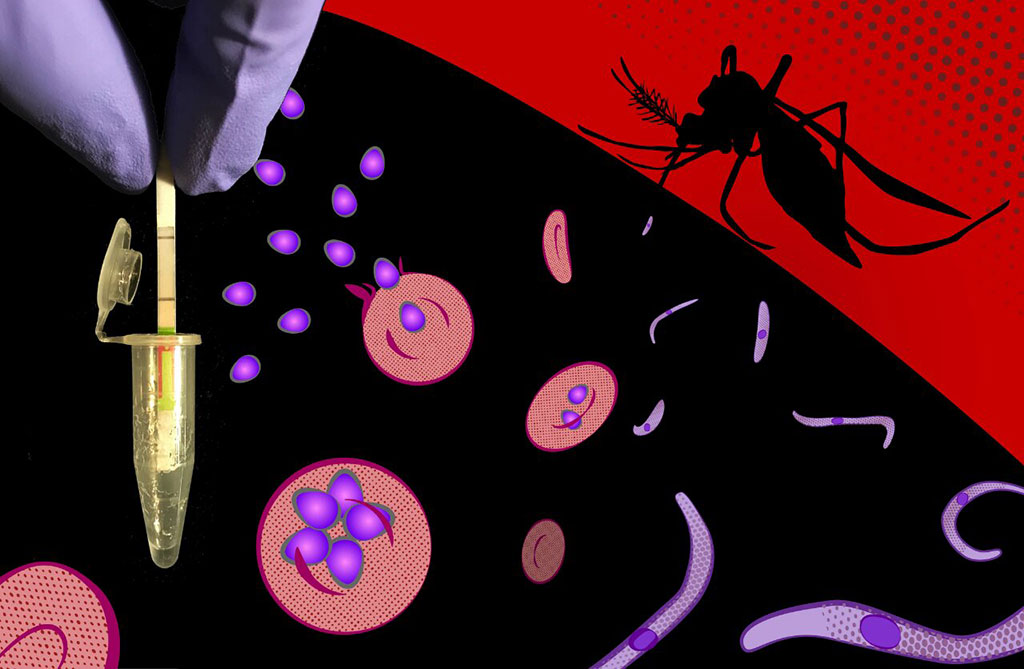 Image: A field-applicable, ultrasensitive diagnostic assay specifically detects DNA and RNA sequences from all Plasmodium species in symptomatic and asymptomatic malaria, and delivers its results fast in simple reporter devices (Photo courtesy of Peter Nguyen, Harvard University)
A novel CRISPR-based ultrasensitive assay system was able to detect the four major types of malaria-causing parasites and has been streamlined for use in locations lacking the advanced laboratory equipment and highly trained technicians required for tests such as RT-qPCR, which is used extensively for monitoring the COVID-19 pandemic.

The investigators modified the SHERLOCK protocol to incorporate the CRISPR-Cas12a enzyme, which they programmed to become activated by a guide RNA that bound to a specific target nucleic acid target sequence, in this case a sequence from one of the four Plasmodium species. Activated Cas12a then non-specifically cleaved any single-stranded DNA strand in its vicinity with an extremely high turn-over rate of about 1,250 collateral cleavage reactions per second.

The complete assay platform was expanded to comprise a 10-minute SHERLOCK parasite rapid extraction protocol, followed by the SHERLOCK diagnostic protocol for 60 minutes, which enabled Plasmodium species-specific detection via fluorescent or lateral flow strip readout. The assay was compatible with different sample types, such as whole blood, plasma, serum, and dried blood; and all components required for amplification, Cas12a activation, and signal generation were lyophilized in a single test tube that functioned as a "one-pot-reaction" following reconstitution of the reagents when mixed with a patient sample.

"This field-ready SHERLOCK diagnostic malaria assay surpasses the sensitivity and specificity requirements set by the WHO for a desired test that can be used to detect low parasite density in asymptomatic carriers of all major Plasmodium species," said senior author Dr. James Collins, professor of medical engineering and science at the Massachusetts Institute of Technology. "Its highly streamlined design could provide a viable solution to the present diagnostic bottleneck on the path to eliminate malaria, and more generally enabling malaria surveillance in low-resource settings."

The rapid SHERLOCK assay for malaria parasites was described in the September 21, 2020, online edition of the journal Proceedings of the National Academy of Sciences of the United States of America.