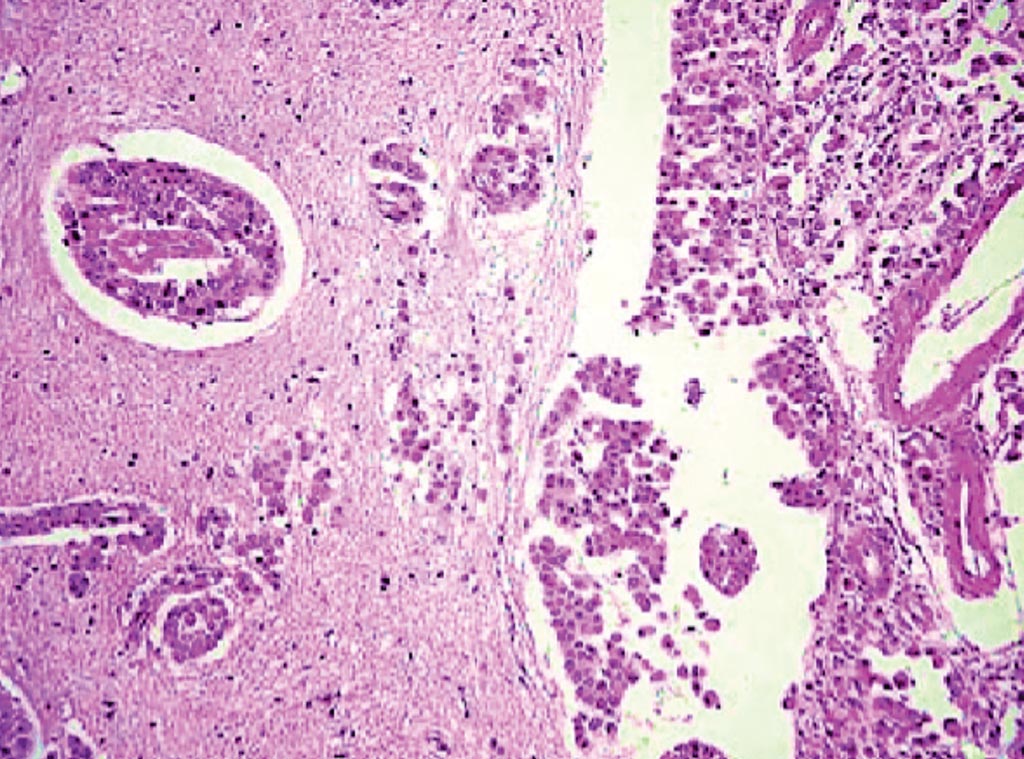 Image: A histopathology of meningeal carcinomatosis with infiltration of the brain gray matter and perivascular malignant cells (Photo courtesy of Zuzana Gdovinova.
When lung cancer metastasizes to the brain, it means the primary lung cancer has created a secondary cancer in the brain. About 20% to 40% of adults with non-small cell lung cancer go on to develop brain metastases at some point during their illness.

DNA methylation is a process by which methyl groups are added to the DNA molecule. Methylation can change the activity of a DNA segment without changing the sequence. When located in a gene promoter, DNA methylation typically acts to repress gene transcription.

Scientists at the Zhejiang Cancer Hospital (Hangzhou, China) performed capture-based targeted sequencing to look for somatic mutations in 60 treatment-naïve advanced non-small cell lung cancer (NSCLC) patients using a panel of 520 cancer-related genes, as well as DNA methylation analyses using a methylation panel consisting of 100,000 CpG sites. The patients were split into three groups: one with brain metastases, a second with leptomeningeal metastases, and the third with no metastases.

The team identified 370 mutations in the lung primary lesions and 574 mutations in the brain metastases. Among them, 242 mutations were shared, of these, 128 were lung primary-specific and 332 were brain-specific. Among the mutations specific to the brain metastases, 82% of them were copy number variations (CNVs), which was significantly higher than the CNVs found in the primary tumors. Only 16% of the CNVs were found in both the lungs and the brain. The investigators also performed a pathway analysis of the genes that were only mutated in the brain and found an enrichment of genes in the PI3K-AKT and focal adhesion pathways.

In the leptomeningeal metastasis group, the team found a significant concordance between the driver mutations in primary lung tissue and the metastases in cerebrospinal fluid. These metastases, however, did not have a significantly larger number of CNVs than the primary tumors. They also found that the list of mutated genes was comparable in all three patient cohorts; they next turned to DNA methylation analysis to see if they could find any markers indicating a higher likelihood of developing metastasis.

The methylation analysis revealed distinct patterns, with 268 methylation blocks being significantly differentially methylated between primary lung lesions and brain metastases. Among those, 211 blocks were hypermethylated in the brain and the remaining 57 blocks were hypermethylated in lung lesions. When they compared the leptomeningeal metastases to the non-metastatic patients, they found 323 blocks that were differentially methylated. Of these, the brain and leptomeningeal metastasis groups shared 15 methylation blocks that the scientists believe may be prognostic of central nervous system metastasis. Through a stepwise regression analysis, the team was able to narrow the signature further to six methylation blocks. The study was presented at the Annual meeting of the European Society for Medical Oncology held September 27- October 1, 2019, in Barcelona, Spain.