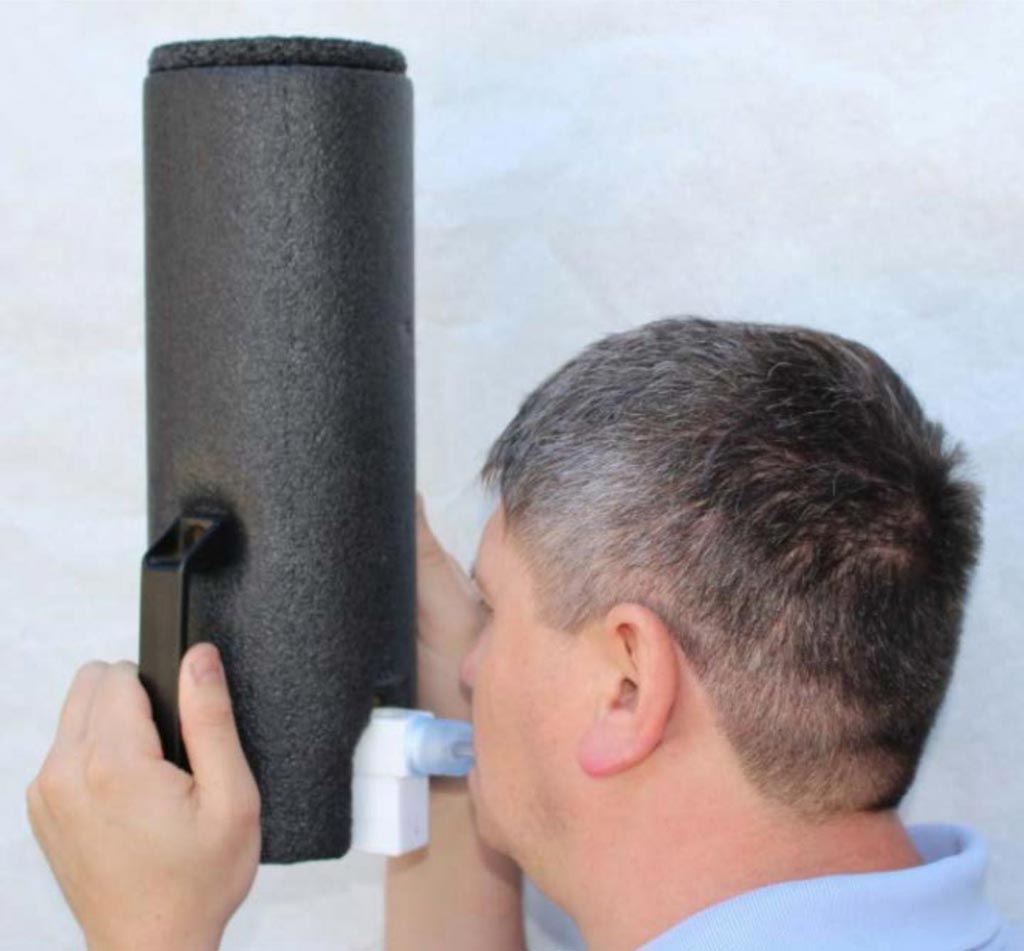 Image: A test to detect opioid drugs in exhaled breath was developed. In this photograph, a volunteer breathes normally into the human breath sampler. Samples are frozen before being taken to the laboratory for analysis (Photo courtesy of Dr. Cristina Davis, University of California, Davis).
A simple and non-invasive technique to collect exhaled breath condensate (EBC) from chronic pain patients was developed, and its usefulness was confirmed by comparing metabolites in breath and blood samples following use of different analgesic opioid drugs.

A breath test would be a useful alternative to blood sampling in caring for chronic pain patients as well as for checking for illegal drug use. Furthermore, there is a lack of information regarding these drugs and their metabolites contained in breath, as well as their pharmacokinetics.

The intent of a study conducted by investigators at the University of California, Davis (USA) was to use pain management drugs, such as morphine and hydromorphone, as model drugs to determine breath composition, metabolite detection, and correlation with blood concentrations after controlled administration, together with other administered medications.

For the study, six patients were given continuous infusion of morphine and hydromorphone intravenously (IV), together with other analgesic drugs (IV and orally). Repeated sampling of serum and EBC was done at two time points separated by 90 minutes. The EBC was collected using a glass tube surrounded by dry ice, and an ethanol solvent wash of the glass was performed after EBC extraction to retrieve the apolar compounds stuck to the glass surface. All samples were analyzed with liquid chromatography coupled to mass spectrometry (LC-MS/MS) to identify possible metabolites present in the sample, and to quantify the drugs being used.

Results revealed that several metabolites, such as normorphine (norM), norhydromorphone (norHM), and dihydromorphone (diHM) were detected in both fractions, while hydromorphone 3-glucuronide (HM 3G) was only detected in the solvent rinse fraction. Promising correlations were found between drug concentrations in blood and breath at different time points for norM, norHM, and HM 3G.

"We can see both the original drug and metabolites in exhaled breath," said senior author Dr. Cristaina Davis, professor of mechanical and aerospace engineering at the University of California, Davis. "There are a few ways we think this could impact society."

The EBC study was published in the October 3, 2019, online edition of the Journal of Breath Research.