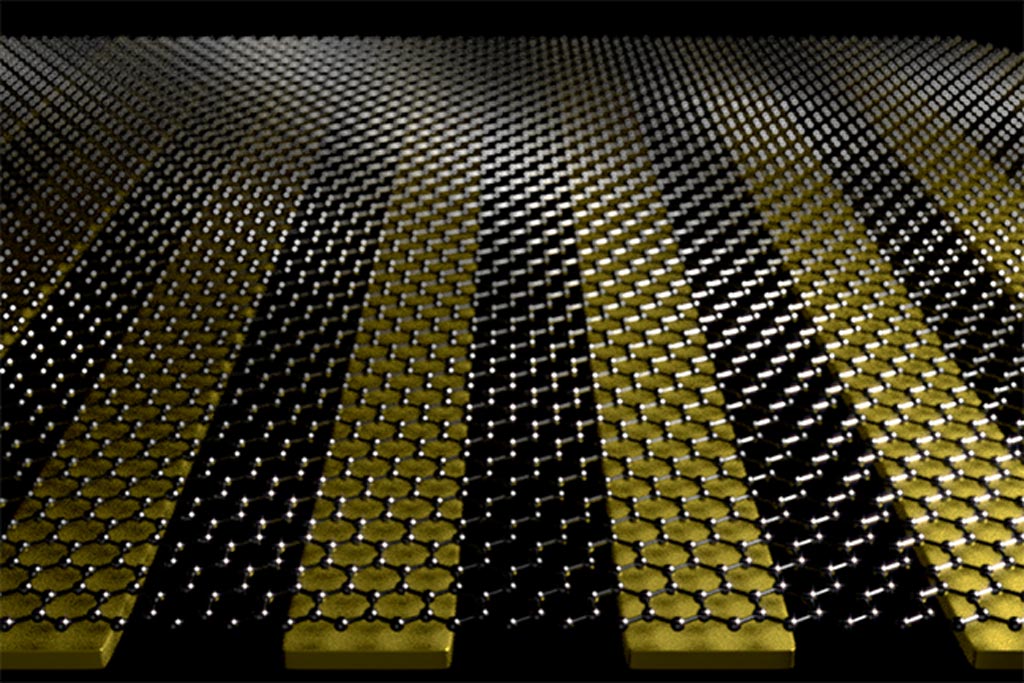 Image: Researchers combined graphene with nano-sized metal ribbons of gold to create an ultrasensitive biosensor that could help detect a variety of diseases in humans and animals (Photo courtesy of Oh Group, University of Minnesota).
A breakthrough in the use of graphene as a plasmon resonator for ultrasensitive infrared spectroscopy should enable development of new biosensors for detection of diseases at the molecular level.

Graphene is a form of carbon consisting of a single layer of carbon atoms arranged in a hexagonal lattice. It is a semimetal with small overlap between the valence and the conduction bands. As such, it can be considered as an indefinitely large aromatic molecule, the ultimate case of the family of flat polycyclic aromatic hydrocarbons. Graphene is the basic structural element of many other forms of carbon, such as graphite, charcoal, carbon nanotubes and fullerenes. Graphene has many uncommon properties such as being the strongest material ever tested while conducting heat and electricity efficiently and being nearly transparent.

Graphene's remarkable single atom thickness minimizes its efficiency to interact with light that is shined through it. Since light absorption and conversion to local electric fields is essential for detecting small amounts of molecules, this has prevented significant use of graphene as a basis for diagnostic devices.

Investigators at the University of Minnesota (Minneapolis/St. Paul, USA) have now combined graphene with nano-sized metal ribbons of gold. Using sticky tape and a high-tech nanofabrication technique called “template stripping,” they created an ultra-flat base layer surface for graphene that made the material suitable for use as an acoustic plasmon resonator.

Plasmon resonance is a phenomenon that occurs when light is reflected off thin metal films, which may be used to measure interaction of biomolecules on the surface. An electron charge density wave arises at the surface of the film when light is reflected at the film under specific conditions. A fraction of the light energy incident at a defined angle can interact with the delocalized electrons in the metal film (plasmon) thus reducing the reflected light intensity. The angle of incidence at which this occurs is influenced by the refractive index close to the backside of the metal film, to which target molecules are immobilized. If ligands in a mobile phase running along a flow cell bind to the surface molecules, the local refractive index changes in proportion to the mass being immobilized. This can be monitored in real time by detecting changes in the intensity of the reflected light.

The investigators reported that graphene-based acoustic plasmons allowed ultrasensitive measurements of absorption bands and surface phonon modes in ångström-thick protein and SiO2 layers, respectively. The acoustic plasmon resonator platform was scalable and could harness the ultimate level of light–matter interactions at nearly 94% efficiency for potential applications including spectroscopy, sensing, metasurfaces, and optoelectronics. When protein molecules were inserted between the graphene and metal ribbons, enough energy was harnessed to view single layers of protein molecules.

“In order to detect and treat many diseases we need to detect protein molecules at very small amounts and understand their structure,” said senior author Dr. Sang-Hyun Oh, professor of electrical and computer engineering at the University of Minnesota. “Currently, there are many technical challenges with that process. We hope that our device using graphene and a unique manufacturing process will provide the fundamental research that can help overcome those challenges. Our computer simulations showed that this novel approach would work, but we were still a little surprised when we achieved the 94% percent light absorption in real devices. Realizing an ideal from a computer simulation has so many challenges. Everything has to be so high quality and atomically flat. The fact that we could obtain such good agreement between theory and experiment was quite surprising and exciting.”

This work was detailed in the February 11, 2019, online edition of the journal Nature Nanotechnology.