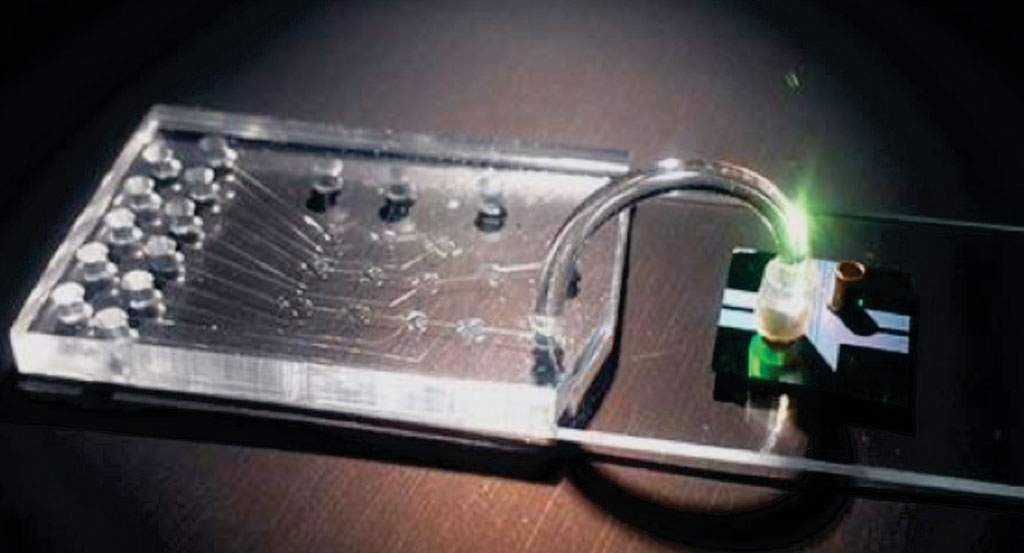 Image: A microfluidic chip for sample preparation and an optofluidic chip for optical detection of individual molecules (Photo courtesy of Joshua W. Parks).
Miniaturized lab-on-chip approaches are prime candidates for developing viable diagnostic tests and instruments because they are small, need only limited test volumes, and can be cost-effective.

Cancer is the second leading cause of death in the USA, making early, reliable diagnosis and treatment a priority for doctors. Genomic biomarkers offer great potential for diagnostics and new forms of treatment, such as immunotherapy.

A team of scientists and engineers from the University of California, Santa Cruz (CA, USA) and Brigham Young University (Provo, UT, USA) developed an optofluidic analysis system that processes biomolecular samples starting from whole blood and then analyzes and identifies multiple targets on a silicon-based molecular detection platform. Instead of transferring relatively large (micro- to milliliters) samples between test tubes or using bulky analytical equipment, samples and reagents are handled on chip-scale devices with fluidic microchannels. This requires much smaller test volumes, and multiple functions can be integrated on a single device, improving speed, reliability and portability of these laboratory processes.

Holger Schmidt, PhD, a professor of electrical engineering and senior author of the study, said, “Our approach uses optofluidic chips where both fluid processing and optical sensing are done on a chip, allowing for further miniaturization and performance enhancements of the chip system. In the near term, we hope to build new diagnostic instruments for molecular diagnostics with applications in oncology and infectious disease detection, both viruses and (drug-resistant) bacteria.” The study was published in the December 2016 issue of the journal Biomicrofluidics.