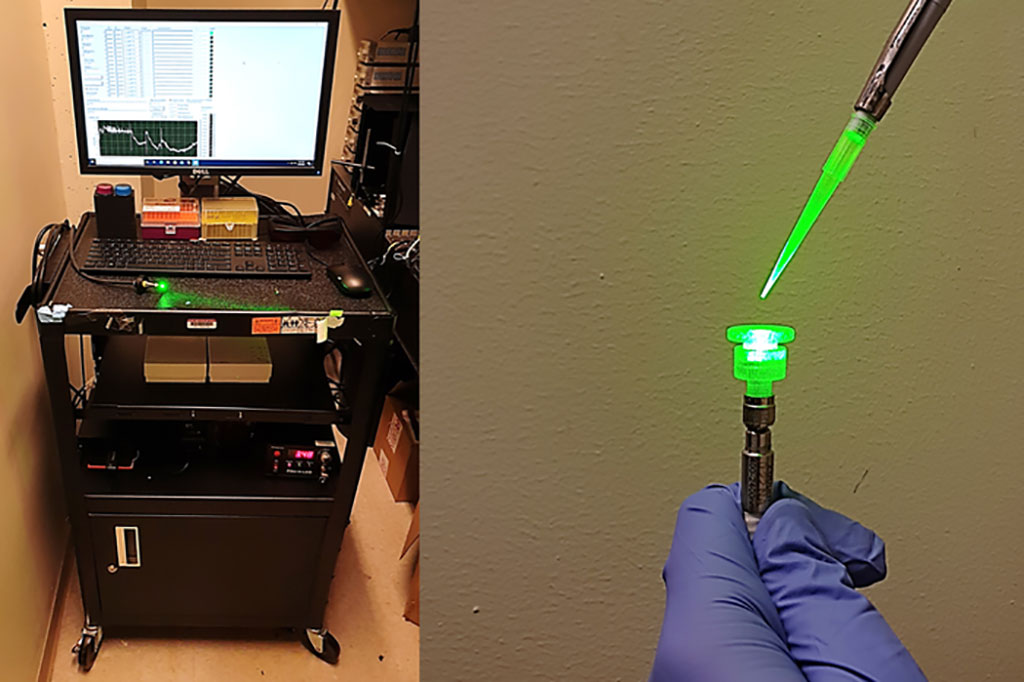 Using specialized carbon nanotubes, a team of engineers has designed a novel sensor that can detect SARS-CoV-2 without any antibodies, giving a result within minutes.

The new sensor developed by scientists at the Massachusetts Institute of Technology (MIT; Cambridge, MA, USA) is based on technology that can quickly generate rapid and accurate diagnostics, not just for COVID-19 but also for future pandemics. The diagnostic is based on carbon nanotube sensor technology that was developed by the scientists several years ago. This novel approach to designing sensors for a variety of molecules technique relies on carbon nanotubes - hollow, nanometer-thick cylinders made of carbon that naturally fluoresce when exposed to laser light. By wrapping such tubes in different polymers, it is possible to create sensors that respond to specific target molecules by chemically recognizing them.

This approach, known as Corona Phase Molecular Recognition (CoPhMoRe), takes advantage of a phenomenon that occurs when certain types of polymers bind to a nanoparticle. Known as amphiphilic polymers, these molecules have hydrophobic regions that latch onto the tubes like anchors and hydrophilic regions that form a series of loops extending away from the tubes. Those loops form a layer called a corona surrounding the nanotube. Depending on the arrangement of the loops, different types of target molecules can wedge into the spaces between the loops, and this binding of the target alters the intensity or peak wavelength of fluorescence produced by the carbon nanotube.

The researchers set out to create a CoPhMoRe sensor for SARS-CoV-2 proteins and developed strategies that allow them to predict which amphiphilic polymers will interact best with a particular target molecule. This enabled them to quickly generate a set of 11 strong candidates for SARS-CoV-2. Within about 10 days of starting the project, the researchers had identified accurate sensors for both the nucleocapsid and the spike protein of the SARS-CoV-2 virus. They also were able to incorporate the sensors into a prototype device with a fiber optic tip that can detect fluorescence changes of the biofluid sample in real time. This eliminates the need to send the sample to a lab, which is required for the gold-standard PCR diagnostic test for COVID-19.

This device produces a result within about five minutes, and can detect concentrations as low as 2.4 picograms of viral protein per milliliter of sample. In more recent experiments done after this paper was submitted, the researchers have achieved a limit of detection lower than the rapid tests that are now commercially available. The researchers also showed that the device could detect the SARS-CoV-2 nucleocapsid protein (but not the spike protein) when it was dissolved in saliva. Detecting viral proteins in saliva is usually difficult because saliva contains sticky carbohydrate and digestive enzyme molecules that interfere with protein detection, which is why most COVID-19 diagnostics require nasal swabs. Sensors that rely on antibodies to detect viral proteins, which form the basis of many of the rapid COVID-19 tests now available, take much longer to develop because the process of designing the right protein antibody is so time-consuming. The researchers have filed for a patent on the technology in hopes that it could be commercialized for use as a COVID-19 diagnostic. The speed with which the researchers were able to develop a working prototype suggests that this approach could prove useful for developing diagnostics more quickly during future pandemics.

“This sensor shows the highest range of limit of detection, response time, and saliva compatibility even without any antibody and receptor design,” said MIT postdoc Sooyeon Cho. “It is a unique feature of this type of molecular recognition scheme that rapid design and testing is possible, unhindered by the development time and supply chain requirements of a conventional antibody or enzymatic receptor.”