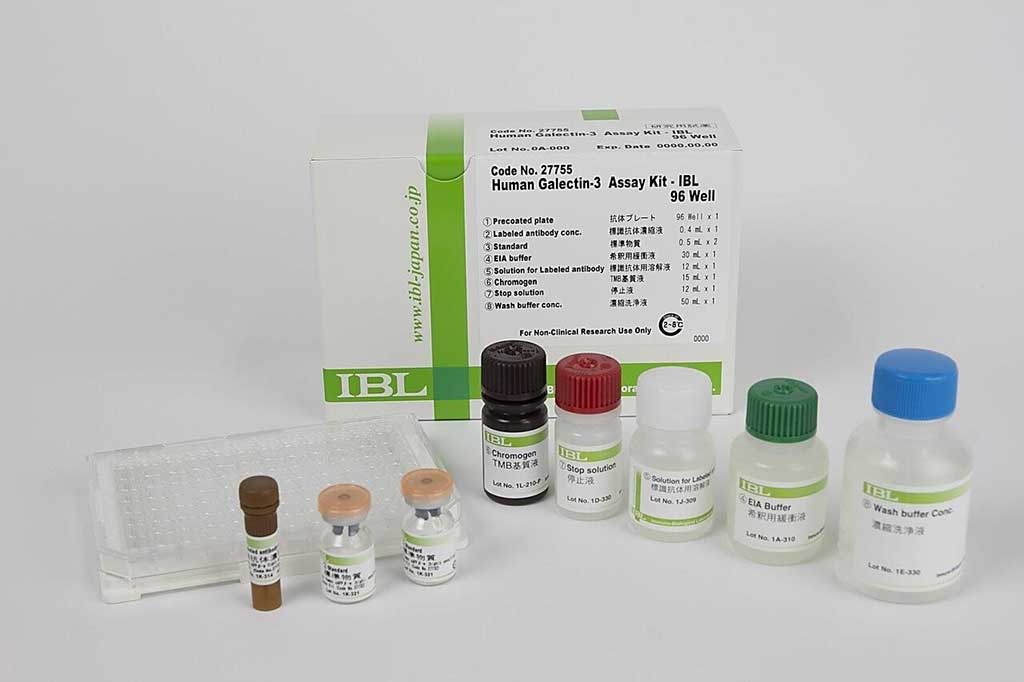 Image: An ELISA kit for Galectin-3 which can predict cardiovascular events in patients with type-2 diabetes (Photo courtesy of Immuno-Biological Laboratories).
Cardiovascular disease (CVD) is a general term for conditions affecting the heart or blood vessels. It's usually associated with a build-up of fatty deposits inside the arteries (atherosclerosis) and an increased risk of blood clots. Type 2 diabetes (T2D) can lead to early and severe atherosclerosis.

Galectin-3 (Gal-3) is also a member of the beta-galactoside-binding protein family that plays an important role in cell-cell adhesion, cell-matrix interactions, macrophage activation, angiogenesis, metastasis, and apoptosis. Galectin-3 is a novel prognostic biomarker with high predictive value for cardiovascular mortality and re-hospitalization in heart failure patients.

Medical scientists at the Fundacion Jimenez Diaz University Hospital (Madrid, Spain) studied 964 patients with coronary artery disease. They assessed baseline galectin-3, monocyte chemoattractant protein-1 (MCP-1) and N-terminal fragment of brain natriuretic peptide (NT-proBNP) plasma levels in the patients. Male patients were 75% in T2D group and 76.6% in the non-T2D group and mean age was 61.0 and 60.0 years, respectively. The team identified 232 patients with T2D. The patients were followed up for a median of 5.39 years.

The scientists reported that patients with T2D showed higher MCP-1(144 versus 133 pg/mL) and galectin-3 (8.3 versus 7.8 ng/mL) levels. Galectin-3 levels were associated with increased risk of the primary outcome in T2D patients (Hazard ratio [HR] = 1.57), along with a history of cerebrovascular events. NT-proBNP and MCP-1, but not galectin-3, were related to increased risk of the event in non-diabetic patients (HR = 1.21 and HR = 1.23 respectively), along with male sex and age. Galectin-3 was also the only biomarker that predicted the development of acute ischemic events and heart failure or death in T2D patients, while in non-diabetics MCP-1 and NT-proBNP, respectively, predicted these events.