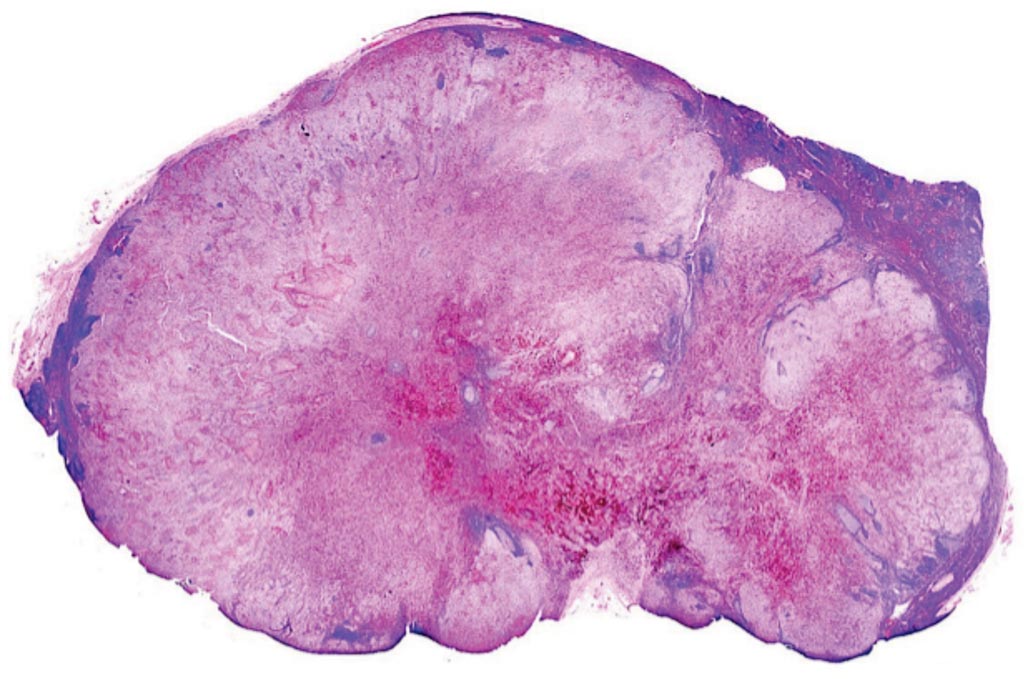 Image: A lymph node with almost complete replacement by metastatic melanoma. The brown pigment is focal deposition of melanin (Photo courtesy of Gabriel Caponetti, MD).
Blood tests that track the amount of tumor DNA can, after only one month of drug therapy, detect how well treatment is working in patients with skin cancer. In the USA, more than 7,200 individuals are expected to die from metastatic melanoma in 2019, with BRAF mutations playing a role in nearly half of such diagnoses.

A recent study takes advantage of the nature of cancer cells, which die and are replaced by new cells continuously as part of aggressive cancer growth. Tumor cells burst as they die, spilling their DNA into the bloodstream, where it can be measured by tests, enabling improved diagnosis and better targeting of treatment based on each individual tumor's DNA.

A team of scientists led by NYU School of Medicine (New York, NY, USA) analyzed blood samples from 345 male and female patients with stage III or IV melanoma, which had already spread from the skin to other organs, and who had BRAF mutations. These patients could not be treated surgically and were part of a larger group of patients participating in a clinical trial of the drugs dabrafenib and trametinib, designed to target BRAF-mutated cancers. The circulating tumor DNA (ctDNA) test was developed by Bio-Rad Laboratories.

Among the study's key findings was that the tumor's BRAF mutation could be detected by the new blood test in 93% of the patients before treatment started. In addition, the team found that BRAF ctDNA levels were no longer detectable after one month of therapy in the 40% of patients who had a positive clinical outcome after targeted therapy, as measured by an average survival time of 28 months. By contrast, the 60% of patients who did not respond as well still had detectable ctDNA levels, and survived for an average of just 14 months.

David Polsky, MD, PhD, a professor of Dermatology and the senior study investigator, said, “Our study offers firm evidence that tracking this genetic information may be helpful in identifying patients whose cancers shrink and who survive longer as a result of a particular drug regimen. If further testing proves successful, monitoring blood samples for BRAF could give us an early indication of whether or not we need to adjust a patient's treatment plan.” The study was presented at the American Society of Clinical Oncology annual meeting, which was held May 31-June 4, 2019, in Chicago, IL, USA.