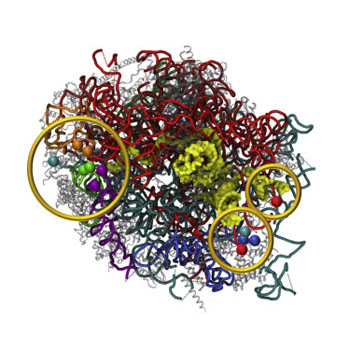 Image: Surface model of Leishmania’s ribosomal large subunit (rLSU) based on the first high-resolution structure, obtained by 2.8-A° cryo-EM. Circled are the locations of three focal points of rLSU rRNA segmentation in regards to the ribosome exit tunnel. 26S rRNA segment-terminals in the leishmanial ribosome were found to converge to these three separate focal points, all located on the solvent-exposed side of the rLSU. The 5.8S rRNA chain is represented as yellow surface and all other chains are represented as cartoon tubes. The study revealed the fragmented nature of leishmanial rRNA and irregular distribution of rRNA modifications, with implications for drug development against Leishmania and related parasites (Photo courtesy of Cell Reports).
Derived from a 2.8-Å cryo-EM map, researchers have achieved an atomic resolution structure of the Leishmania donovani large ribosomal subunit (rLSU). Comparison with other eukaryotes and with bacteria provides an important framework for better understanding ribosome biogenesis and a solid structural basis for developing highly selective therapeutics against Leishmania and closely related parasites.

Leishmania is a single-cell eukaryotic parasite of the Trypanosomatidae family of microbes, whose members cause various debilitating and often fatal diseases. A team of researchers from the Weizmann Institute of Science (Rehovot, Israel), University of Michigan Life Sciences Institute (Ann Arbor, MI, USA), and Hebrew University-Hadassah Medical School (Jerusalem, Israel), have now obtained the first high-resolution snapshots of the parasites’ ribosome, providing a detailed structural map of the rLSU.

The unique features that make the Trypanosomatid ribosome distinct from other eukaryotes are what make it such an attractive drug target as “you need to be able to attack the pathogen without harming the host’s cells,” said study co-leader Prof. Georgios Skiniotis, PhD, U. Michigan. Study co-leader Prof. and 2009 Nobel Laureate Ada Yonath, PhD, Weizmann Institute, added: Previous studies were able to obtain resolutions of 5.6 angstroms and 12 angstroms. The new study obtained a resolution of 2.8 angstroms — which revealed a nearly complete atomic structure and new functional details.

Among other findings, the work enabled direct observation of eukaryotic rRNA modifications (e.g. 2’-O methylations) known to play roles in ribosome assembly and function. These observations showed that leishmanial rRNA is fragmented and hyper-modified at unique positions and that fragmented rRNA termini converge into three focal points involving 5.8S.

The study, by Shalev-Benami M, Zhang Y, et al, was published in the July 12, 2016, issue of the journal Cell Reports.