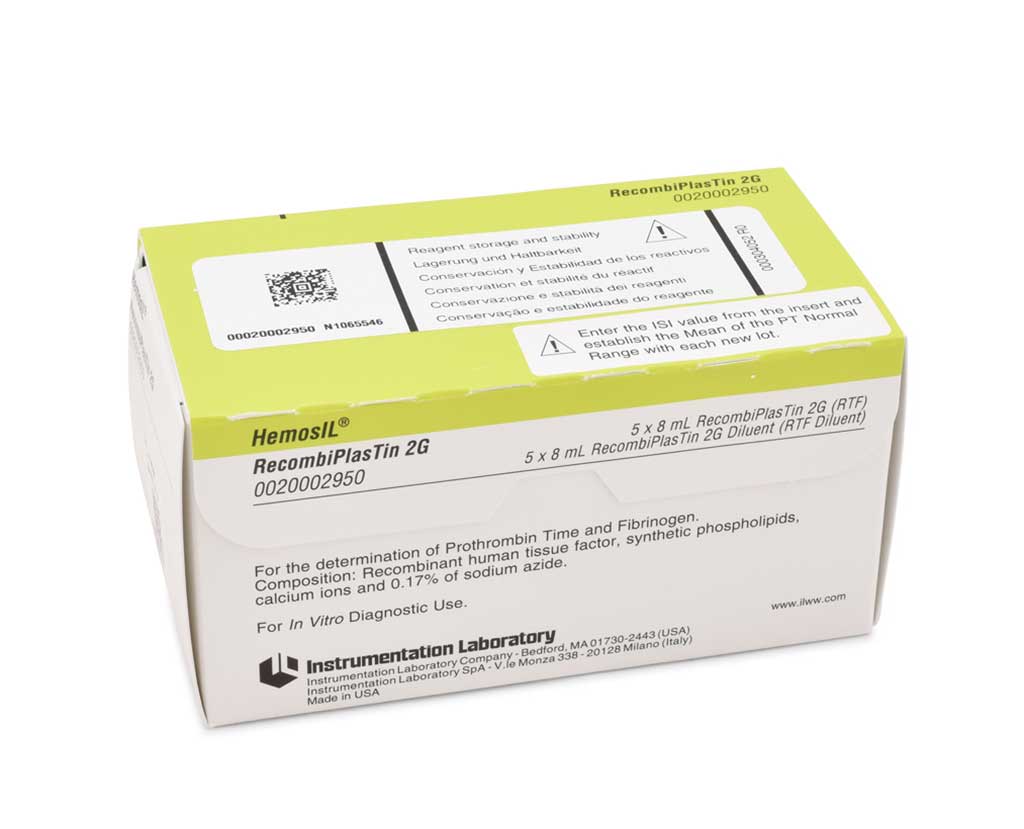 Image: HemosIL RecombiPlasTin 2G assay: A high sensitivity thromboplastin reagent based on recombinant human tissue factor (RTF) for the quantitative determination in human citrated plasma of Prothrombin Time (Photo courtesy of Instrumentation Laboratories).
Preanalytical variables may affect the results of routine coagulation assays. One important variable is hematocrit (Ht), which affects coagulation testing results. A sample with high Ht has lower plasma quantity, resulting in a dilution effect on the sample by an excess of the anticoagulant sodium citrate.

The prothrombin time/international normalized ratio (PT/INR) test is the assay used to monitor dose-adjustments of vitamin K antagonist (VKA) treatment. Thus, for patients on monitored oral anticoagulant therapy who present an elevated Ht, adjustment of sodium citrate volume is essential, otherwise, these patients would have an incorrect diagnosis or treatment.

Clinical Laboratory Scientists at the Universidade de Sao Paulo (Sao Paulo, Brazil) enrolled 181 patients from the pulmonary hypertension ambulatory group with elevated Ht (>55%) and on warfarin therapy. All patients were diagnosed with polycythemia due to pulmonary hypertension and received anticoagulation treatment at the anticoagulation ambulatory center.

Paired citrate-adjusted and unadjusted blood specimens were tested using the PT test using two different thromboplastin reagents that are routinely used in their laboratory: the first was the HemosIL RecombiPlasTin 2G, with a thromboplastin (International Sensitivity Index [ISI] 1.00) of lyophilized recombinant human tissue factor (RTF), and the second reagent was HemosIL PT-Fibrinogen HS Plus with a thromboplastin (ISI 1.24) lyophilized from rabbit brain extract (HS Plus). Both reagents were produced by Instrumentation Laboratories (Bedford, MA, USA). The results are expressed as the international normalized ratio (INR). The correlation and percent change (% change) between sample pairs were calculated.

The authors concluded that the adjustment of citrate concentration in samples with markedly elevated hematocrit depends on the PT reagent used in the routine tests, and each laboratory must perform a validation assay. Their data suggest that with RecombiPlasTin 2G reagent, samples of patients with polycythemia on warfarin therapy with Ht up to 62% could be obtained in an unadjusted citrate concentration tube. Using this PT reagent, can reduce the number of collection tubes and length of patient stay and avoid recall of patients, meaning lower treatment costs and faster patient care. The study was published in the November. 2020 issue of the journal Practical Laboratory Medicine.