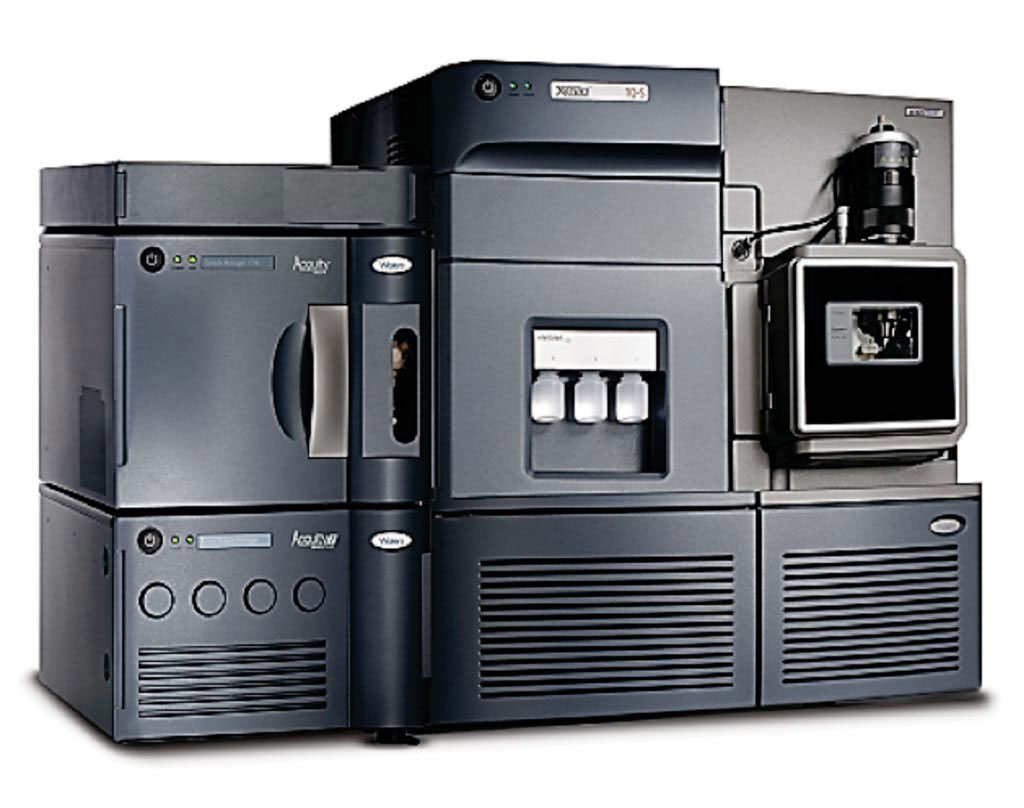 Image: The Xevo mass spectrometer with an Acquity ultra high performance chromatography system (Photo courtesy of Waters Corporation).
Prognosis for patients discovered to have an adrenal cortical carcinoma (ACC), a cancerous adrenal mass, is poor, and a cure is only achievable through early detection and surgery. The incidental discovery of an adrenal mass often triggers additional scans to determine whether the mass is cancerous.

Imaging procedures, such as CT and MRI scans, are used in clinical practice with increasing frequency and often lead incidentally to the discovery of a nodule in the adrenal glands, detected on average in 5% of scans. These so-called adrenal incidentalomas are in the majority harmless, but once an adrenal mass has been discovered it is important to exclude adrenal cancer as well as adrenal hormone excess.

A team of endocrinologists based at the University of Birmingham (Birmingham, UK) and their international associates studied more than 2,000 patients with newly diagnosed adrenal tumors from 14 centers of the European Network for the Study of Adrenal Tumours (ENSAT). They assessed the accuracy of diagnostic imaging strategies based on maximum tumor diameter (≥4 cm versus <4 cm), imaging characteristics (positive versus negative), and urine steroid metabolomics (low, medium, or high risk of ACC), separately and in combination, using a reference standard of histopathology and follow-up investigations.

Enrolled participants collected a 24 hour urine sample that was used for multisteroid profiling by liquid chromatography–tandem mass spectrometry (LC–MS/MS), with quantification of 15 urinary steroid metabolites and application of a machine-learning algorithm. A Xevo mass spectrometer with an Acquity ultra high performance chromatography system (Waters, Milford, MA, USA) with a HSS T3, 1.8µm, 1.2×50mm column (heated at 60oC) was used to analyze the steroids. The algorithm was developed by applying generalized matrix learning vector quantisation to steroid excretion data from a retrospective cohort of 139 patients with adrenal masses (40 ACC and 99 adrenocortical adenoma [ACA]) measured retrospectively by use of the LC–MS/MS method used in the study.

The scientists reported that of 2,169 participants recruited between Jan 17, 2011, and July 15, 2016, they included 2,017 from 14 specialist centers in 11 countries in the final analysis and 98 (4.9%) had histopathologically or clinically and biochemically confirmed ACC. A urine steroid metabolomics result indicating high risk of ACC had a positive predictive value PPV of 34.6%. When the three tests were combined, in the order of tumor diameter, positive imaging characteristics, and urine steroid metabolomics, 106 (5.3%) participants had the result maximum tumor diameter of 4 cm or larger, positive imaging characteristics, and urine steroid metabolomics indicating high risk of ACC, for which the PPV was 76.4% .

Wiebke Arlt, MD, DSc, FRCP, a Professor of Medicine and senior author of the study, said, “Introduction of this new testing approach into routine clinical practice will enable faster diagnosis for those with cancerous adrenal masses. We hope that the results of this study could lead to significant decreases in patient burden and a reduction in healthcare costs, by not only reducing the numbers of unnecessary surgeries for those with benign masses, but also limiting the number of imaging procedures that are required.” The study was published on July 23, 2020 in the journal The Lancet Diabetes & Endocrinology.