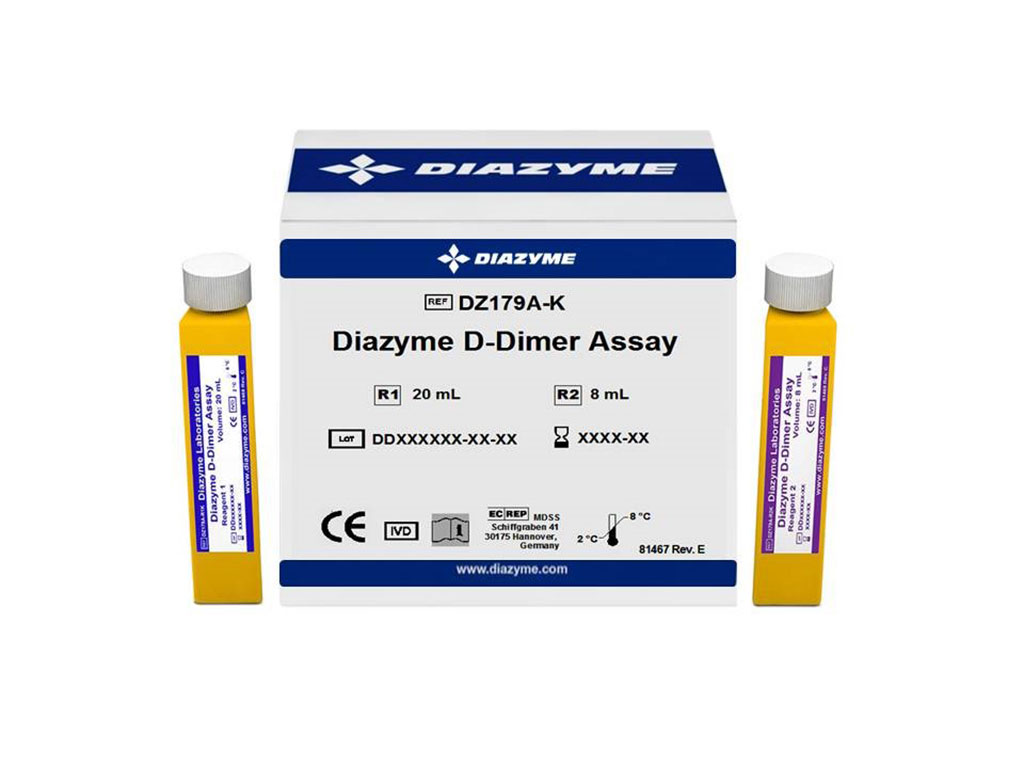 Image: Diazyme`s D-Dimer Assay is a highly sensitive liquid stable latex enhanced immunoturbidimetric test kit, designed to work on most open clinical chemistry analyzers to provide rapid results with reduced reagent cost (Photo courtesy of Diazyme Laboratories)
Pulmonary embolism is the sudden blockage of a major blood vessel (artery) in the lung, usually by a blood clot. In most cases, the clots are small and are not deadly, but they can damage the lung and if the clot is large and stops blood flow to the lung, it can be deadly.

D-dimer is a fibrin degradation product (or FDP), a small protein fragment present in the blood after a blood clot is degraded by fibrinolysis. It is so named because it contains two D fragments of the fibrin protein joined by a cross-link. A new way to interpret blood test results in patients who are investigated for blood clots in their lungs, and this new approach applies to D-dimer blood tests, which are used by physicians to rule out the presence of a blood clot.

Scientists working with the Hamilton Health Sciences (Hamilton, ON, Canada) enrolled a total of 2,017 patients aged 18 and older who were evaluated in a study, of which 7% had pulmonary embolism on initial diagnostic testing. The average age of the patients was 52 years, and 66% were female. Of the patients in the study, 1,474 (73%) were enrolled at Hamilton Health Sciences or St. Joseph's Healthcare Hamilton. These patients, and those at other university-based clinical centers in Canada, were tested from December 2015 through May 2018 and assessed 90 days later.

The team reported that of the 1,325 patients identified by an emergency department physician as having a low (1,285 of the patients) or a moderate (40 patients) probability of having a pulmonary embolism and who had negative D-dimer results (that is, less than 1,000 or 500 ng/mL, respectively), none had venous thromboembolism during follow-up.