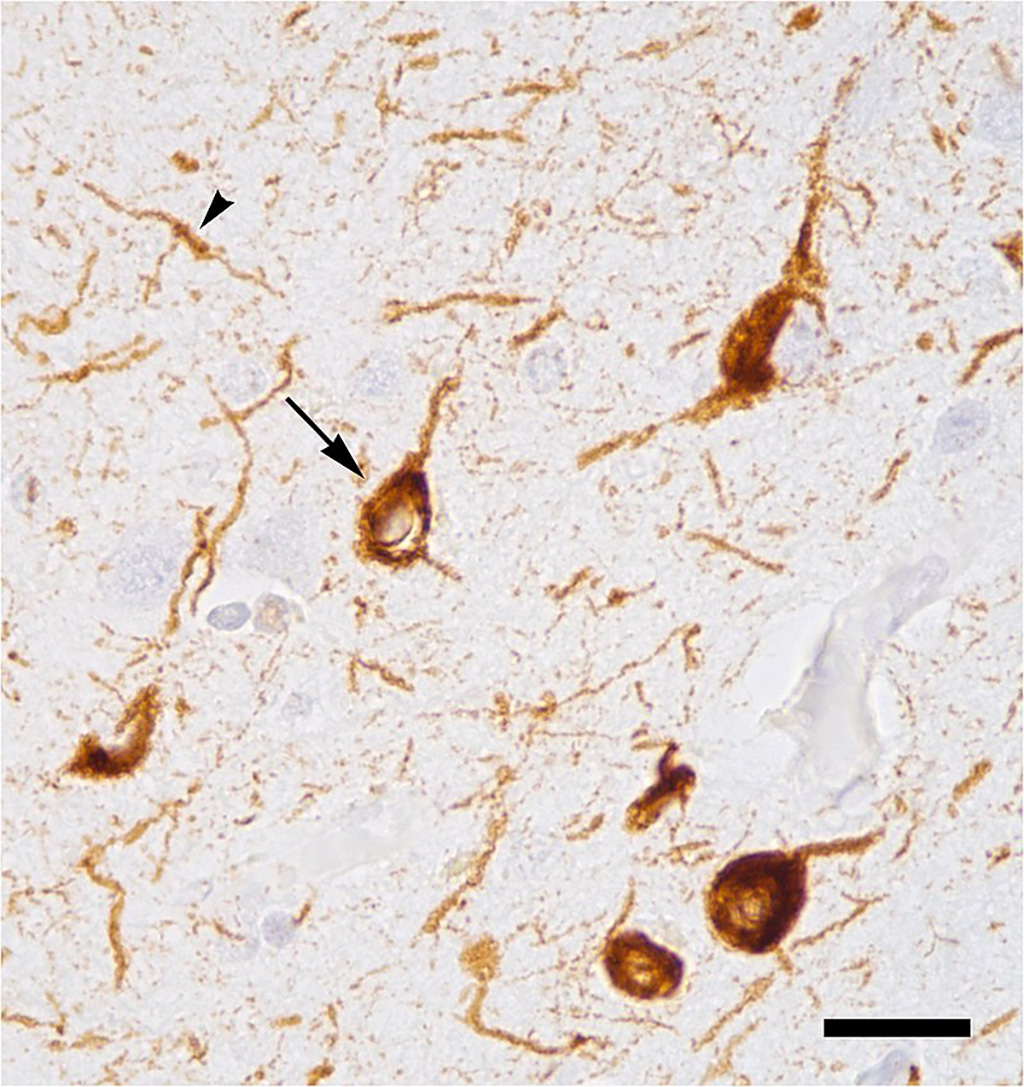 Image: Abnormal accumulation of tau protein in neuronal cell bodies (arrow) and neuronal extensions (arrowhead) in the neocortex of a patient who had died with Alzheimer\'s disease. Tau protein was stained brown using immunohistochemistry. The bar represents a distance of 25 microns (0.025 millimeters). (Photo courtesy of Wikimedia Commons)
A team of neurodegenerative disease researchers has linked the APOE-epsilon-4 gene to increased formation of toxic tau protein aggregates (tangles) as well as amyloid-beta plaques in individuals with Alzheimer’s disease (AD).

Apolipoprotein E-epsilon-4 is the single most important genetic risk factor for Alzheimer disease. While APOE-epsilon-4 has been shown to be associated with increased amyloid-beta burden, its association with cerebral tau pathology has been controversial.

In the current study, investigators at McGill University (Montreal, Canada) sought to determine whether APOE-epsilon-4 was associated with medial temporal tau pathology independently of other AD risk factors such as amyloid-beta, sex, clinical status, and age. The investigators worked with two cohorts of Alzheimer’s disease patients, which comprised 489 participants, selected based on availability of amyloid-PET, tau-PET, magnetic resonance imaging, and genotyping for APOE-epsilon-4.

The mean (SD) age of the 489 participants was 70.5 (7.1) years; 171 were APOE-epsilon-4 carriers (34.9%), and 230 of 489 were men. In both cohorts, APOE-epsilon-4 was associated in increased tau-PET uptake in the entorhinal cortex and hippocampus independently of amyloid-beta, sex, age, and clinical status.

These results indicated that the elevated risk of developing dementia conferred by APOE-epsilon-4 genotype involved mechanisms associated with both amyloid-beta and tau aggregation.

"Alzheimer's disease is defined by the aggregation of two proteins in the brain: amyloid plaques and tau tangles, both of which are known to be neurotoxic," said first author Joseph Therriault, a doctoral student in neuroscience at McGill University. "APOE-epsilon-4 has been associated with amyloid plaques, but its association with tau tangles has been controversial. In our study of nearly 500 individuals, we demonstrate this association in living humans. For years, we have known that people with the APOE-epsilon-4 gene have more memory problems. We were able to show that carriers of this gene also had greater levels of tau tangles in memory centers of the brain, even after controlling for how much amyloid plaques they had."

The study was published in the December 20, 2019, online edition of the Journal of the American Medical Association: Neurology.