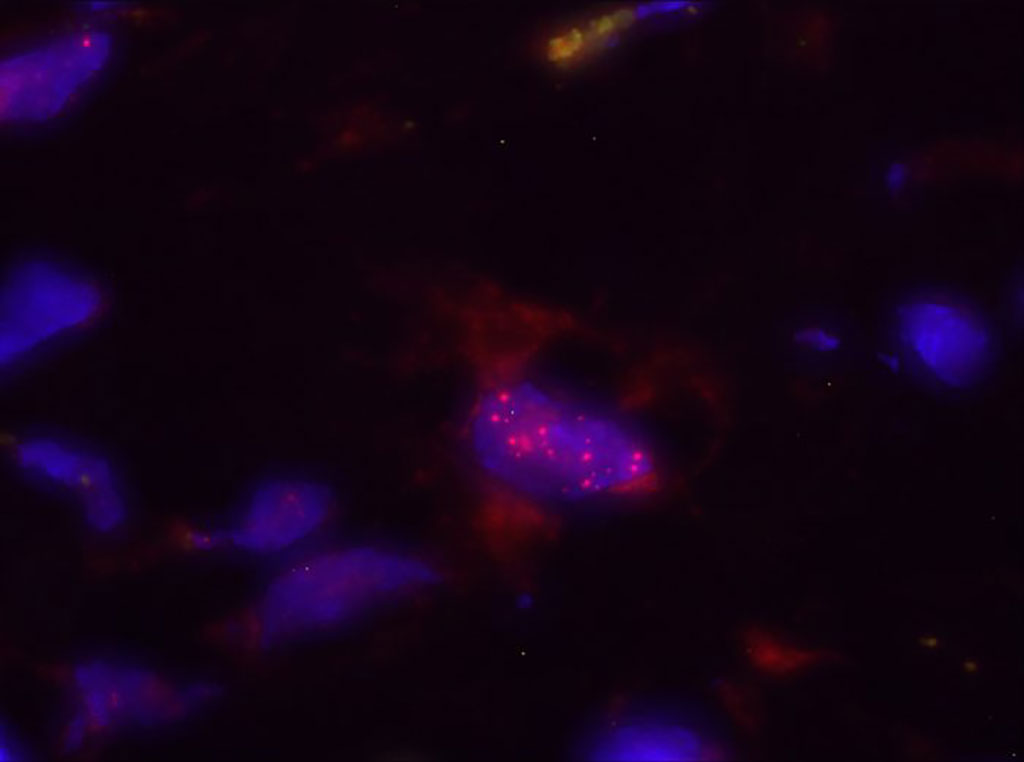 Image: In red, Bacteroides, one of the microorganisms identified in this work, inside nucleus of a pancreatic cell, in blue (Photo courtesy of CNIO)

Researchers have identified a molecular signature of 27 microorganisms in stool samples that is able to predict whether an individual is at high risk of developing pancreatic ductal adenocarcinoma, the most common form of pancreatic cancer.

Pancreatic cancer is a relatively rare cancer type, but survival rates are very low. This has been attributed to the difficulty in diagnosing the disease, which is often not detected until it has progressed irreversibly.

As recent evidence has suggested a role for the microbiome in triggering pancreatic ductal adenocarcinoma (PDAC) and promoting its progression, investigators at the Spanish National Cancer Research Centre (Madrid, Spain) and the European Molecular Biology Laboratory (Heidelberg, Germany) conducted a study to explore the fecal and salivary microbiota as potential diagnostic biomarkers.

For this study, samples of saliva, feces, and pancreatic tissue from 136 individuals (57 newly diagnosed patients, 50 controls, and 27 patients with chronic pancreatitis) from two Spanish hospitals were analyzed using advanced genomic techniques. A further 76 patients from a German study were analyzed in the validation phase.

Results revealed that fecal metagenomic classifiers performed much better than saliva-based classifiers and identified patients with PDAC with an accuracy of up to 0.84 AUROC (area under the receiver operating characteristic curve) based on a set of 27 microbial species, with consistent accuracy across early and late disease stages. Furthermore, a microbiota-based classification model confined to PDAC-enriched species was highly disease-specific when validated against 25 publicly available metagenomic study populations for various health conditions. Both microbiome-based models had a high prediction accuracy for the German validation population. Several fecal PDAC marker species were detectable in pancreatic tumor and non-tumor tissue using 16S rRNA sequencing and fluorescence in situ hybridization.

The investigators said, "In many cases, once pancreatic cancer is detected, it is too late. We need to diagnose the disease at a much earlier stage, before symptoms appear. To do this, we need to identify and define the population at risk and have good screening tests to detect the cancer when it is still curable. Sophisticated biostatistical and bioinformatics analyses have allowed us to construct a signature of 27 stool-derived microbes, mostly bacteria, that discriminates very well between cases with pancreatic cancer and controls, both in their most advanced and earliest stages.”

The investigators have applied for a patent to develop a pancreatic cancer diagnostic kit to detect these microbial genomes in stool samples in a rapid, non-invasive, and affordable way.

The fecal genome study was published in the March 8, 2022, online edition of the journal Gut.