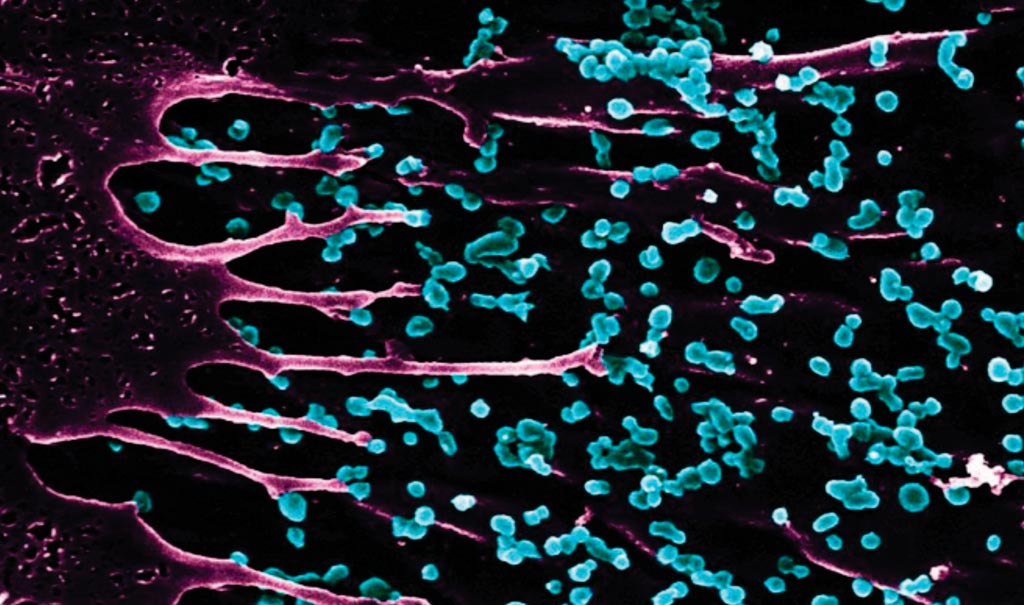 Image: Blue-stained dots are Chikungunya virus particles peppering the surface of an infected cell (Photo courtesy of Institute Pasteur/Thérèse Couderc).
Chikungunya virus has re-emerged as an important pathogen causing several outbreaks in the world. As the clinical symptoms of chikungunya are similar to other mosquito-borne febrile diseases, the definitive diagnosis of the disease is based on the detection of viral genome from the patient blood.

Loop-mediated isothermal amplification (LAMP) is a method that rapidly amplifies nucleic acids under isothermal condition. The method can be applied to detect genomes of RNA viruses if reverse transcriptase is included in the reaction (reverse transcription LAMP; RT-LAMP). Using the LAMP and RT-LAMP methods, amplification reaction of nucleic acids can be performed under isothermal conditions without expensive or sophisticated equipment.

An international team of scientists working with Hokkaido University (Sapporo, Japan) detected and sequenced the chikungunya virus (CHIKV) genome by performing a combination of a modified reverse transcription loop-mediated isothermal amplification (RT-LAMP) method and a MinION sequencer. They developed the protocol for drying all the reagents for the RT-LAMP in a single reaction tube.

The team found that using this system, the CHIKV genome was effectively amplified under isothermal conditions, and used as a template for MinION sequencing with a laptop computer. The assay was also validated using clinical samples. Serum samples were obtained from clinically suspected patients collected in 2016 and 2018, and which had been stored at the Oswaldo Cruz Institute. The obtained sequence data confirmed the CHIKV outbreaks and identified the genotype.

The authors concluded that a one-step, easy gene amplification assay for CHIKV genome detection was successfully developed. The assay was evaluated with RNA and serum samples from 16 CHIKV serology positive patients during recent chikungunya outbreaks in Rio de Janeiro, Brazil. In combination with MinION sequencing technology, they also identified the CHIKV genotypes with a laptop computer. The developed CHIK-CZC-LAMP diagnostics and MinION sequencing workflow will certainly contribute to future outbreak analysis in resource-limited settings. The study was published on June 3, 2019, in the journal PLOS Neglected Tropical Diseases.