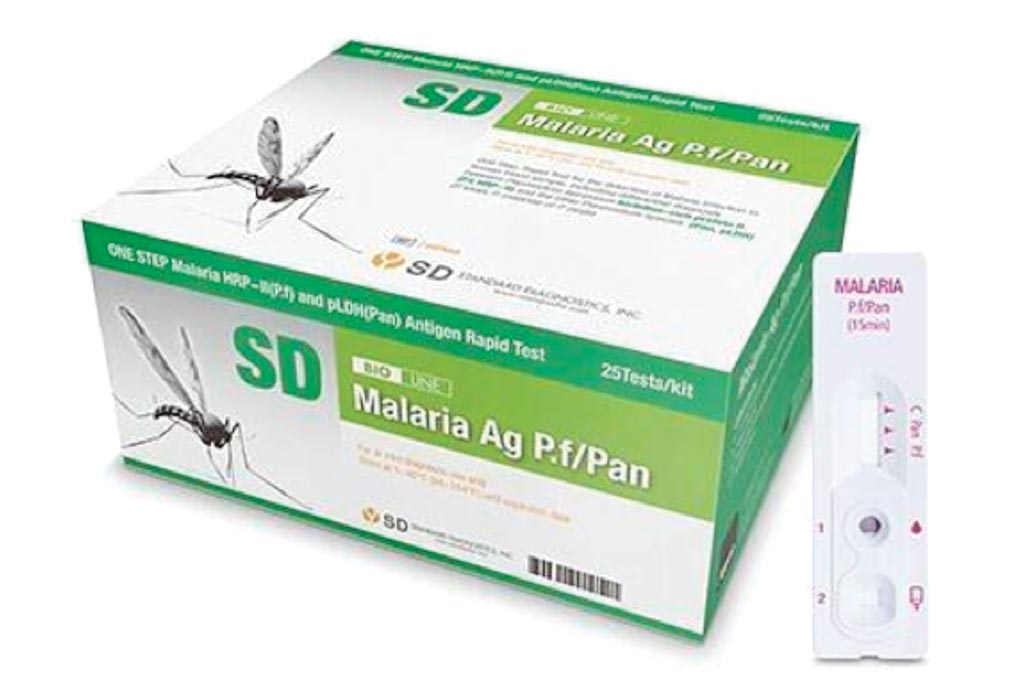 Image: The SD BIOLINE Malaria Ag P.f/Pan test is a rapid, qualitative and differential test for the detection of histidine-rich protein II (HRP-II) antigen of Plasmodium falciparum and common Plasmodium lactate dehydrogenase (pLDH) of Plasmodium species in human whole blood (Photo courtesy of Alere).
Malaria remains one of the most important parasitic infections in humans. It is endemic throughout the tropical and subtropical regions of the world and is responsible for more than 200 million clinical cases and more than 400,000 deaths each year.

Scientists affiliated with the University of Yaoundé 1 prepared Giemsa-stained blood smears for peripheral blood smear (Pbs), placental intervillous space (IVS) blood smear and placental tissue impression smear (PTIS) from HIV-negative women during delivery. If parasites were not detected after examining 200 microscopic fields of thick smears, the sample was considered malaria negative; however, when parasites were detected, parasitaemia was estimated per microliter of blood. Both thin film and impression smear were used to determine parasite species.

Hemoglobin (Hb) levels in maternal blood were determined using the URIT-3300, Coulter Counter and a woman was diagnosed as anemic if her Hb was less than 11 g/dL. The One Step HRP-II and pLDH RDT SD Bioline malaria antigen P.f/pan was used to diagnose malaria infection in the peripheral blood samples.

The authors concluded that their results depict One Step malaria HRP-II RDT to be better in detecting placental P. falciparum infection in pregnant women compared to Giemsa-stained peripheral thick blood smear. This is important for better case management since microscopic examination of PTIS cannot be employed during pregnancy. The study was published on December 4, 2018, in the Malaria Journal.