Ebola Test with Portable Reader Authorized for Emergency Use 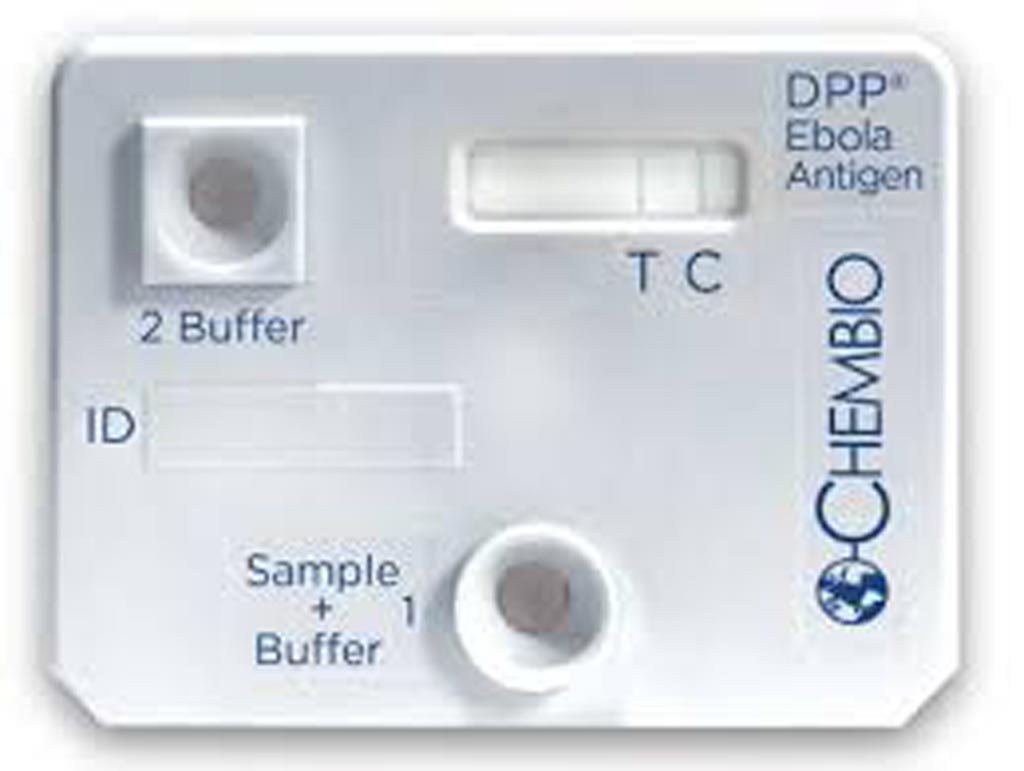 authorization (Photo courtesy of Chembio Diagnostic Systems).
Ebola is a rare but deadly virus that causes fever, body aches, and diarrhea, and sometimes bleeding inside and outside the body. As the virus spreads through the body, it damages the immune system and organs. Ultimately, it causes levels of blood-clotting cells to drop. This leads to severe, uncontrollable bleeding and kills up to 90% of people infected.

The disease is spread from human to human is through contact with blood and/or bodily fluids (urine, saliva, feces, vomit, sweat, breast milk and semen) of infected individuals. This may be through direct contact and/or droplet spread (droplets of infected bodily fluids produced by sneezing, coughing or talking) or via objects (such as needles) and environments that have been contaminated with the virus.

The US Food and Drug Administration (FDA, Silver Springs, MD, USA) issued an emergency use authorization (EUA) for a rapid, single-use test for the detection of Ebola virus (Zaire Ebola virus). This is the second Ebola rapid antigen fingerstick test available under EUA, but the first that uses a portable battery-operated reader, which can help provide clear diagnostic results outside of laboratories and in areas where patients are likely to be treated.

The test, called the DPP Ebola Antigen System (Chembio Diagnostic Systems Inc, Medford, NY, USA) is used with blood specimens, including capillary “fingerstick” whole blood, from individuals with signs and symptoms of Ebola virus disease (EVD) in addition to other risk factors, such as living in an area with large numbers of EVD cases and/or having contact with other individuals exhibiting signs and symptoms of EVD.

The DPP Ebola Antigen System provides rapid diagnostic results with tests that can be performed in locations where a healthcare provider does not have access to authorized Ebola virus nucleic acid tests (PCR testing), which are highly sensitive but can only be performed in certain laboratory settings that are adequately equipped.

The DPP Ebola Antigen System has been authorized for use with capillary “fingerstick” whole blood, ethylenediaminetetraacetic acid (EDTA, an anticoagulant added to whole blood to prevent coagulation) venous whole blood and EDTA plasma. The DPP Ebola Antigen System should only be run in facilities, including treatment centers and public health clinics where patients are likely to be treated, and laboratories that are adequately equipped, trained and capable of such testing.

It is important to note that a negative result from the DPP Ebola Antigen System, especially in patients with signs and symptoms of EVD, should not be used as the sole basis for patient management decisions. The diagnosis of EVD must be made based on multiple factors such as, history, signs, symptoms, exposure likelihood and other laboratory evidence in addition to the detection of Ebola virus.

US Food and Drug Administration