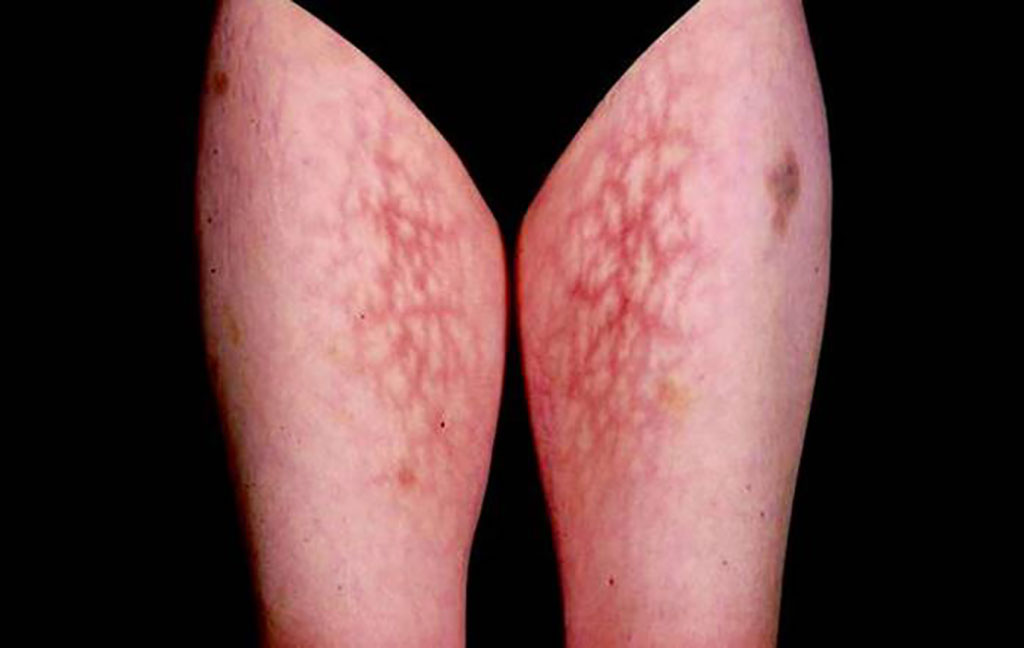 Image: Livedo Reticularis: this is one of the most important physical signs in Antiphospholipid syndrome (APS) and is felt by many physicians to be an additional risk factor for the risk of APS clinical events, over and above the presence of antiphospholipid antibody (Photo courtesy of Graham Hughes and Shirish Sangle)

APS is rare in children and known to cause inflammation and recurring, potentially fatal, blood clots. Two-thirds of children with the autoimmune disease experienced additional symptoms not formally associated with APS, including low platelet counts, hemolytic anemia and livedo reticularis, a rash indicating abnormal blood flow to the skin.

Rheumatologists at the University of Michigan (Ann Arbor, MI, USA) and their colleagues conducted a retrospective review of pediatric APS at a tertiary referral center. The electronic medical record system was queried from 2000 through 2019, and 21 cases were included. Antiphospholipid antibody (aPL, [anti-β2GPI and anti-cardiolipin]) were measured at by the QUANTA Lite ELISA (Werfen, Bedford, MA, USA) prior to 2015. Since 2015, aPL has been quantified via a multiplex assay using the BioPlex 2200 System (Bio-Rad Laboratories, Hercules, CA, USA).

The team also captured positivity of other autoantibodies where available. The antinuclear antibody test (ANA) was done by immunofluorescence assay (IFA) with a positive result at a titer of 1:80 or greater. Anti-double-stranded-DNA was done via chemiluminescent immunoassay. Anti-Sm and anti-chromatin testing was done via an extractable nuclear antibody panel for which the test methodology is a multiplex flow immunoassay. Also included was the lupus anticoagulant panel that included prothrombin time (reference range 9.4 – 12.2 s) with INR, partial thromboplastin time (reference range 21.0–29.0 s), dilute Russell’s viper venom test (DRVVT). The phosphatidylserine/prothrombin antibody IgG and IgM panel was a Werfen ELISA.

The scientists reported that 21 patients were included with a median age at diagnosis of 16 years and median follow-up of 5.8 years. Secondary APS was slightly more common than primary APS (11 versus 10 cases) and was primarily diagnosed in the context of systemic lupus erythematosus. Two thirds of patients (67%) also had “non-criteria” manifestations of APS including thrombocytopenia, autoimmune hemolytic anemia, and livedo reticularis/racemosa. Almost half of patients (43%) had recurrent thrombosis, typically when patients were sub-therapeutic or non-adherent with anticoagulation. Damage Index in Patients with Thrombotic APS (DIAPS) scores indicated a chronic burden of disease in both primary and secondary APS patients.

Jacqueline Madison, MD, a Rheumatologist and lead author of the study, said, “Beyond clots, there is not one definitive feature of this rare disease in children; rather, there is a constellation of symptoms we found among these patients. If we can prove these symptoms are related to the condition, then physicians should be able to test for APS sooner and diagnose the disease earlier to prevent potentially catastrophic clots.”

The authors concluded that with regards to laboratory testing for APS, anti-PS/PT could be considered as an additional aPL lab test in patients for whom clinical suspicion of APS is high. ANA may not be positive in APS, particularly primary APS, and so it should not be used as a screening test for APS in pediatric patients. The study was published on February 22, 2022 in the journal Pediatric Rheumatology.