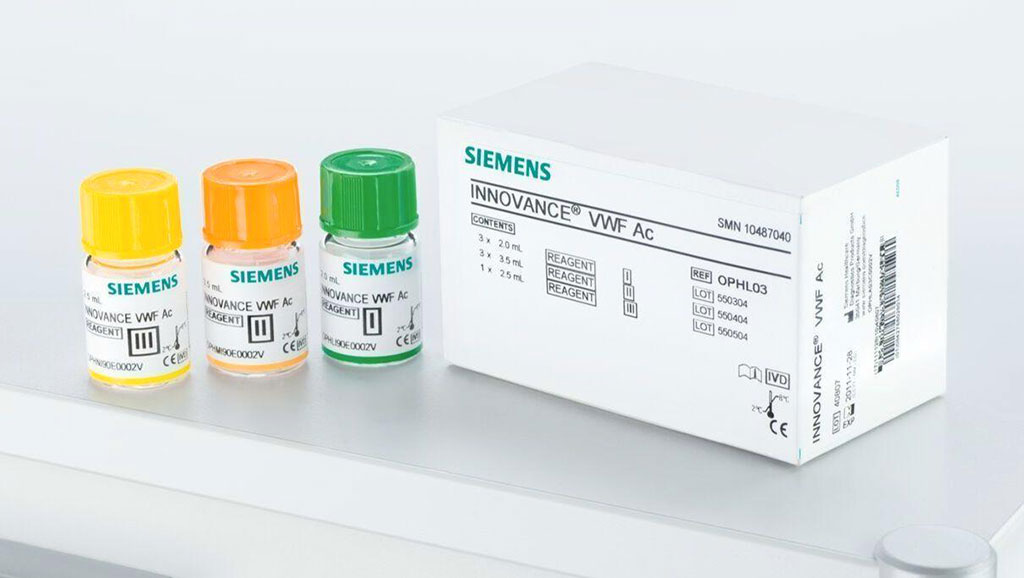 Von Willebrand disease (VWD) is the most common inherited bleeding disorder, affecting approximately one percent of the population - and both men and women equally. Physicians diagnose VWD based on bleeding symptoms, patient history, and lab test results, including von Willebrand factor (VWF) activity. Until now, VWF activity assays were disadvantaged with low precision and sensitivity, and with difficulties in diagnosing certain VWF polymorphisms. To help address these deficiencies, the International Society on Thrombosis and Hemostasis (ISTH) recently published a guideline changing its recommendation for VWF activity assays from the ristocetin cofactor assay (VWF:RCo) to newer assays (VWF:GPIbM) that directly measure the platelet binding activity of VWF without the need of ristocetin. Now, Siemens Healthineers (Erlangen, Germany) has announced that its INNOVANCE VWF Ac assay - the sole fully automated assay of its kind (VWF:GPIbM) - is now available to U.S. laboratories for use on the company’s BCS XP System, as well as on the Sysmex CS-2500 and CS-5100 hemostasis analyzers.

Siemens’ INNOVANCE VWF Ac assay is the only fully automated, commercially available VWF activity assay for laboratories in the U.S. that uses the guideline recommended VWF:GPIbM technology. The INNOVANCE VWF Ac assay is a liquid, ready-to-use assay, and offers laboratorians a broad measuring range with a lower limit of quantitation compared to the VWF:RCo technology. Currently deployed in many European laboratories, the assay's VWF:GPIbM technology allows for a more accurate functional assessment of VWF activity with greater precision and heightened sensitivity, and the ability to detect VWF variants that otherwise might be missed compared to other commercially available VWF assay technologies.

“After the positive experience we had using this assay in a study, we as caregivers in the U.S. are urgently waiting to use the INNOVANCE VWF Ac assay to diagnose our patients, as we believe it supports improved von Willebrand disease diagnosis and patient management - particularly now given the new recommendations from the ASH ISTH NHF WFH 2021 guidelines on the diagnosis of VWD,” said Dr. Steven Pipe, Professor of Pediatrics and Pathology from the University of Michigan, Ann Arbor.