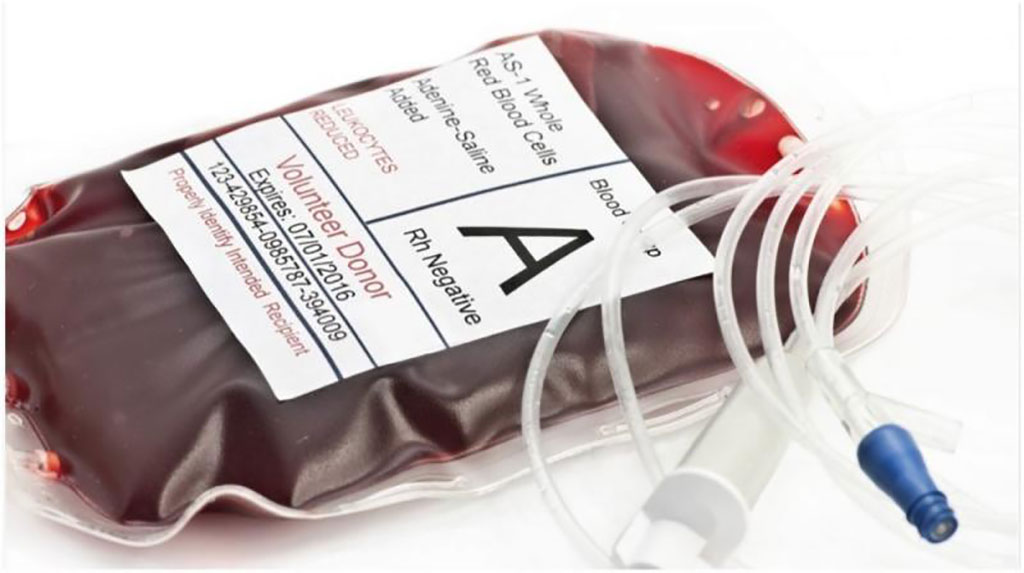 Image: Storage of red blood cells in alkaline PAGGGM improves metabolism but has no effect on recovery after transfusion (Photo courtesy of openPR)

Directly after red blood cell (RBC) transfusion, a significant number of RBCs are cleared from the circulation; in some patients, up to 38% of the transfused RBCs are cleared in the first 24 hours.

Hematologists at the University of Amsterdam (Amsterdam, The Netherlands) conducted an open-label randomized controlled trial to study the effect of storage time and additive solution on the post-transfusion recovery (PTR) of RBCs. Twenty healthy male subjects were recruited who donated 500 mL and 200 mL of whole blood in citrate-phosphate-dextrose (CPD) at the national blood bank 35 and two days before the transfusion, respectively.

In this trial the effect of storage, phosphate-adenine-glucose-guanosine-gluconate-mannitol (PAGGGM) versus saline-adenine-glucose-mannitol (SAGM), on post-transfusion recovery (PTR) and metabolic restoration after transfusion was assessed. Subjects received an autologous biotinylated RBC concentrate stored for 35 days in SAGM or PAGGGM. As a reference for the PTR, a 2-day stored autologous biotinylated RBC concentrate stored in SAGM was simultaneously transfused. RBC phenotype and PTR were assessed after transfusion.

The investigators reported that the PTR was significantly higher in the 2-day stored RBCs than in 35-day stored RBCs two and seven days after transfusion: 96% (range 90% to 99%) versus 72% (66% to 89%) and 96% (90% to 99%) versus 72% (66% to 89%), respectively. PTR of SAGM- and PAGGGM-stored RBCs did not differ significantly. Glucose and redox metabolism were better preserved in PAGGGM-stored RBCs. The differences measured in the blood bag remained present only until one day after transfusion. No differences in RBC phenotype were found besides an increased complement C3 deposition on 35-day RBCs stored in PAGGGM.

The authors concluded that despite a better metabolic profile of PAGGGM RBCs, PAGGGM storage did not lead to a higher PTR. Therefore, storage PAGGGM is not a superior alternative for storage in SAGM. Furthermore, the metabolic storage lesion was corrected within a day after transfusion. Finally, 35 days of storage resulted in a lower PTR compared with two days of storage. The study was published on July 6, 2022 in the journal Blood Advances.