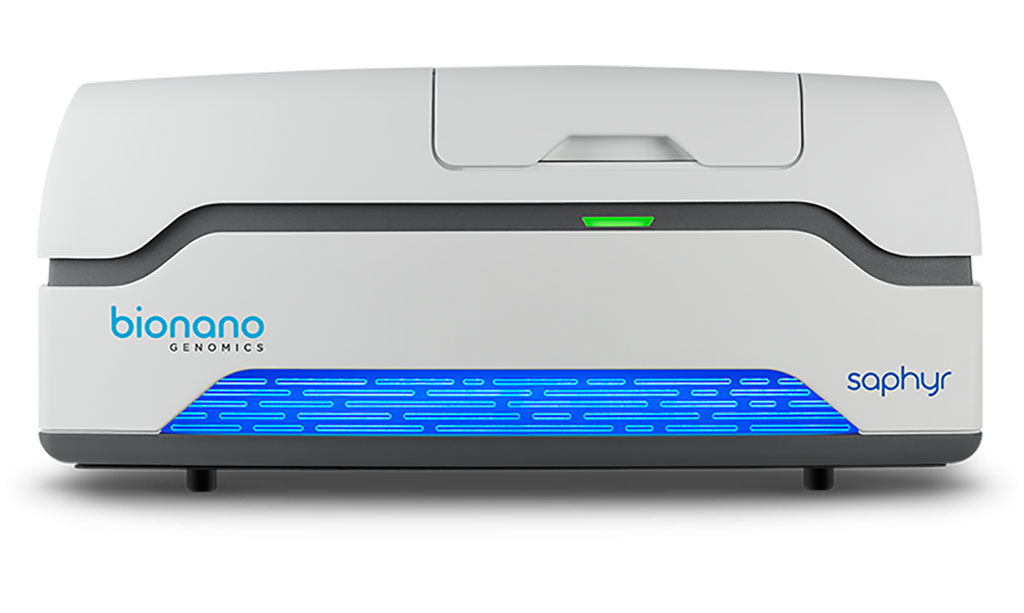 Image: The Bionano Genomics Saphyr instrument used for Optical Genome Mapping (Photo courtesy of Bionano Genomics)
Optical genome mapping (OGM) is a novel method that fills this void by being able to detect all classes of structural variations (SVs), including copy number variations (CNVs). OGM is being adopted by laboratories as a tool for both postnatal constitutional genetic disorders and hematological malignancies.

An international team of medical geneticists led by the Radboud University Medical Center (Nijmegen, the Netherlands) investigated the ability of optical genome mapping (OGM) to detect known constitutional chromosomal aberrations. Ultra-high-molecular-weight DNA was isolated from 85 blood or cultured cells and processed via OGM. A de novo genome assembly was performed followed by structural variant and CNV calling and annotation, and results were compared to known aberrations from standard-of-care tests such as karyotype, fluorescence in situ hybridization (FISH), and/or copy number variants (CNV) microarray). The team isolated ultra-high molecular weight DNA from the samples and preparing the samples for OGM with the Bionano Genomics Saphyr instruments (San Diego, CA, USA).

The authors concluded that their results highlight the potential for OGM to provide a cost-effective and easy-to-use alternative that would allow comprehensive detection of chromosomal aberrations and structural variants, which could give rise to an era of “next-generation cytogenetics. The study was published on July 7, 2021 in the American Journal of Human Genetics.