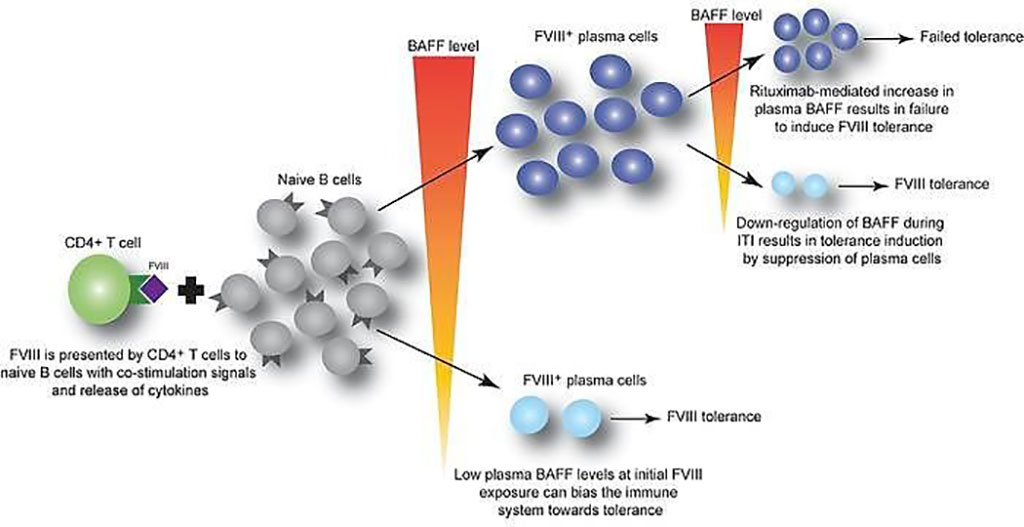 Image: B cell–activating factor modulates the factor VIII immune response in hemophilia A (Photo courtesy of Children’s Hospital of Philadelphia)
Hemophilia A, also called factor VIII (8) deficiency or classic hemophilia, is a genetic disorder caused by missing or defective factor VIII (FVIII), a clotting protein. Although it is passed down from parents to children, about 1/3 of cases found have no previous family history.

Currently, hemophilia is the most common inherited bleeding disorder, which affects 1 in 10,000 men across the globe. Since patients lack coagulation factor VIII (FVIII), therapies are typically aimed at infusions to replace the missing protein. Some patients, however, become treatment resistant due to the development of neutralizing antibodies, or FVIII inhibitors.

An international team of hematologists and their associates led by those at the Children’s Hospital of Philadelphia (Philadelphia, PA, USA) used plasma samples from 69 pediatric patients undergoing recombinant FVIII therapy, in addition to samples from mouse models, to determine whether cytokine B cell activating factor (BAFF) may help generate and sustain FVIII antibodies. Of the pediatric patients, 24 had FVIII inhibitors.

BAFF, proliferation-inducing ligand (APRIL), and B cell maturation antigen (BCMA) levels from the patient samples were measured by a multiplex ELISA Because of limitations on sample transport, BAFF levels from rituximab-exposed patients were measured by ELISA (R&D Systems, Minneapolis, MN, USA). The frequency of FVIII-specific immunoglobulin-secreting B cells was quantified by a B cell ELISPOT assay. Plates were analyzed using the ImmunoSpot system (Cellular Technology Limited, Shaker Heights, OH, USA).

The team reported that BAFF levels to be higher in patients with persistent FVIII inhibitors compared to those without inhibitors (1.30 versus 0.99 ng/mL, respectively). Moreover, BAFF levels decreased from baseline in hemophilia A inhibitor patients who underwent immune tolerance induction (ITI) and achieved FVIII tolerance from 1.43 ± 0.63 to 0.81 ± 0.32 ng/mL. In comparison, those who failed ITI had steady levels at 1.33 to 1.23 ng/mL. A similar pattern and trend in BAFF levels was also noted for 46 adults, although non-inhibitor patients saw a generally higher level of BAFF. Furthermore, a receiver-operating characteristic (ROC) analysis of the pooled pediatric and adult data showed that BAFF levels greater than 1.03 ng/mL had 68.3% sensitivity, 63.8% specificity, and likelihood ratio of 1.89 for the presence of FVIII inhibitors.

Valder R. Arruda, MD, PhD, a Hematologist and senior author of the study, said, “Our data suggest that BAFF may regulate the generation and maintenance of FVIII inhibitors, as well as anti-FVIII B cells. Given that an FDA-approved anti-BAFF antibody is currently used to suppress the immune response in autoimmune diseases, future studies should explore the use of this treatment in combination with rituximab to achieve better outcomes for hemophilia A patients resistant to FVIII protein replacement therapy.”

The authors concluded that their data suggest that BAFF may regulate the generation and maintenance of FVIII inhibitors and/or anti-FVIII B cells. Finally, antiCD20/anti-BAFF combination therapy may be clinically useful for ITI. The study was published on April 15, 2021 in The Journal of Clinical Investigation.