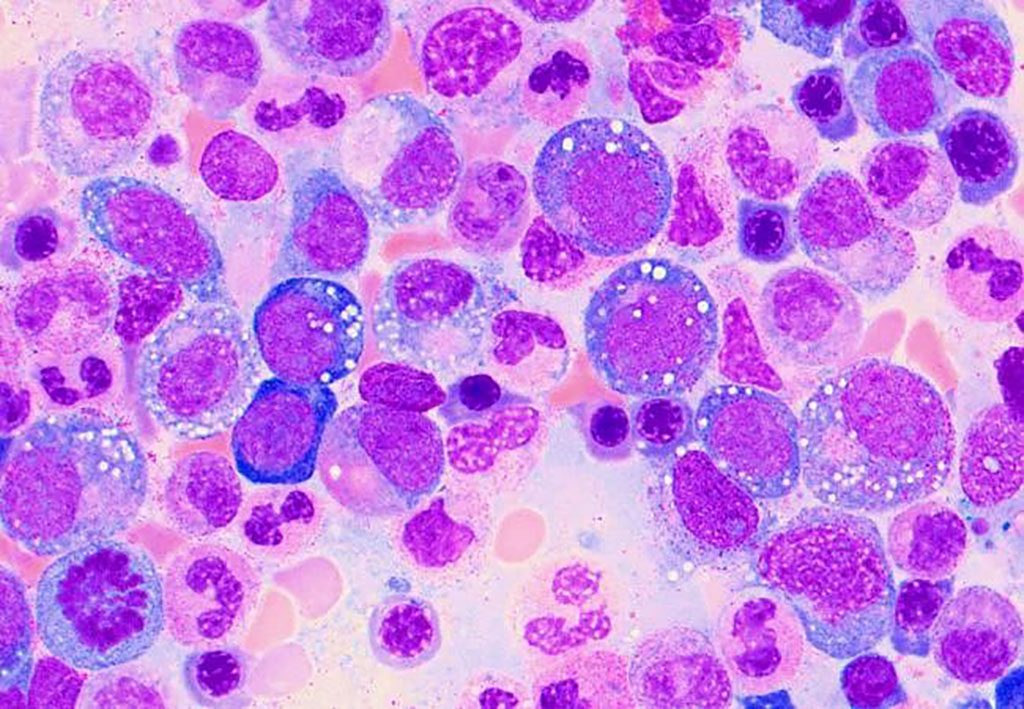 Image: Bone marrow smear showing vacuoles in myeloid cells in a patient with VEXAS (Photo courtesy of Katherine Calvo, MD, PhD, and Marcela Ferrada, MD)
VEXAS syndrome is a serious inflammatory condition which develops in men over 50, causing them to become very sick and fatigued, and can be fatal. It was originally thought to be rare, but a new study has identified genetic mutations which indicate that the disease is actually much more common.

VEXAS syndrome causes unexplained fevers, painful skin rashes and affects the bone marrow resulting in a reduced number of red and white blood cells. The disease affects only men because it is caused by genetic mutations on the X chromosome, and men carry only one X chromosome. The mutations are not present at birth; instead they develop during the patient's lifetime.

A multi-center team led by the University of Leeds (Leeds, UK) examined DNA samples to establish the prevalence of the genetic mutations identified when the disease was first discovered in 2020. They screened a cohort of 18 local patients who matched the symptoms and found mutations in 10 of them. Eight had the known variant previously associated with the disease, but two patients had completely different variants. This identified a new way in which the mutations can cause VEXAS, meaning it is likely to be much more common than was currently thought. VEXAS stands for Vacuoles, E1 enzyme, X-linked, autoinflammatory, somatic syndrome.

The team identified 10 new patients with somatic mutations in UBA1, but only eight had altered p.Met41. A novel variant, c.167C>T; p.Ser56Phe was identified, which was present in myeloid, and not lymphoid lineages and led to preferential loss of the catalytic activity of cytoplasmic UBA1. An additional novel variant, c.118-1G>C was identified at the splice acceptor site of exon 3 leading to altered splicing in vitro. Bone marrow biopsies from two patients with a Met41 substitution and the novel splice site variant were consistent with previously reported features of VEXAS. The bone marrow of the patient with the p.Ser56Phe variant was less similar, likely driven by a distinct but overlapping disease mechanism.

Sinisa Savic, MRCP, FRCPath, PhD, a Clinical Immunologist and a senior author of the study, said, “I have been looking after a number of patients with what we now know is VEXAS syndrome for several years. Their care has been complicated by the fact that we did not have a diagnosis which made choosing their treatment and advising them about the prognosis very difficult. Having established the cause of VEXAS we now have a real opportunity to transform the care of these patients. We know there are still many patients who have a VEXAS-like condition, but in whom we do not know the cause.”

The authors concluded that their study confirms somatic p.Met41 substitutions in UBA1 as a major cause of VEXAS syndrome and identifies two new disease causing mutations. The study was published on March 9, 2021 in the journal Blood Advances.