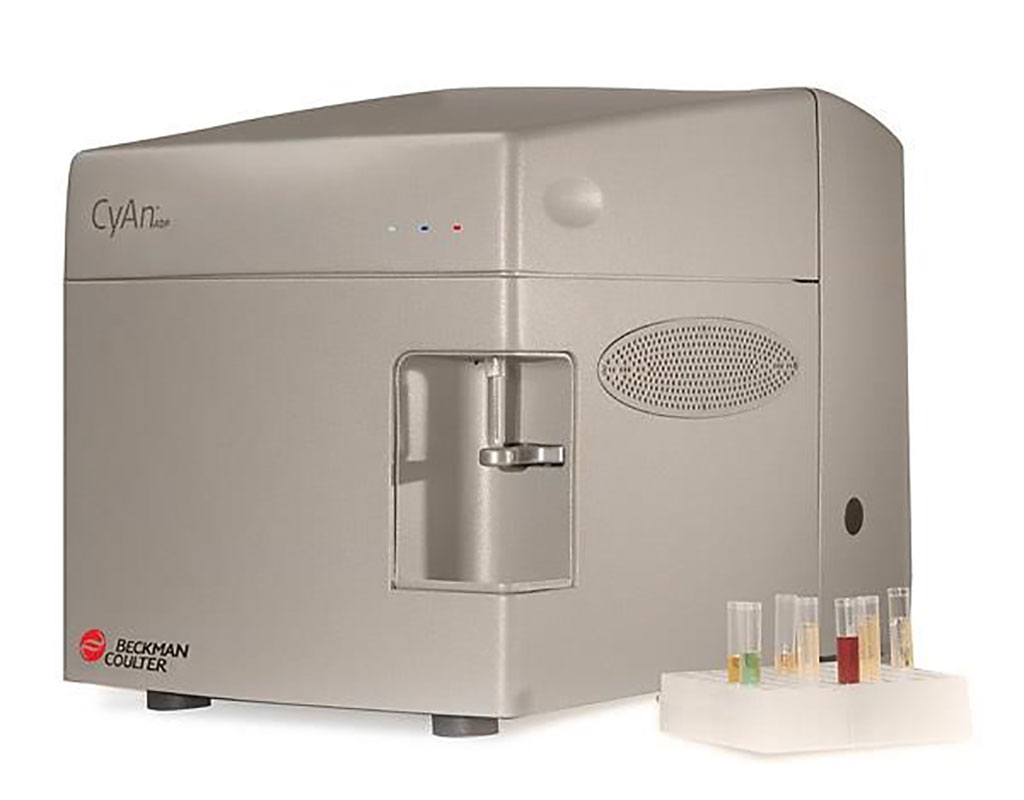 Image: The Cyan ADP flow cytometer (Photo courtesy of Beckman Coulter).
Mutations of the hematopoietic master regulator RUNX1 are associated with acute myeloid leukemia, familial platelet disorder and other hematological malignancies whose phenotypes and prognoses depend upon the class of the RUNX1 mutation.

RUNX1 mutations can occur within the DNA-binding domain (DBD), the transactivation domain (TAD), or are a result of translocations resulting in the generation of fusion proteins. The biochemical behavior of these oncoproteins and their ability to cause unique diseases has been well studied, but the genomic basis of their differential action is unknown.

Cancer and Genomic Scientists at the University of Birmingham (Birmingham, UK;) compared integrated phenotypic, transcriptomic, and genomic data from cells expressing four types of RUNX1 oncoproteins in an inducible fashion during blood development from embryonic stem cells. The team utilized a well-characterized embryonic stem cell (ESC) differentiation system, which recapitulates the different steps of hematopoietic specification of blood cells from haemogenic endothelium (HE) and allows inducible expression of oncoproteins.

The team showed that how each class of mutant RUNX1 deregulates endogenous RUNX1 function by a different mechanism, leading to specific alterations in developmentally controlled transcription factor binding and chromatin programming. The result is distinct perturbations in the trajectories of gene regulatory network changes underlying blood cell development which are consistent with the nature of the final disease phenotype. Some types of RUNX1 mutations directly changed how other genes behaved in blood cells, not all did. In particular, the mutations that are inherited through families do not immediately affect the cells but instead change the roadmap they follow to become other cell types, such as platelets and white blood cells.

Constanze Bonifer, PhD, a Professor of Experimental Haematology, and lead author of the study, said, “The most important results we found came from studying mutations that run in families which predisposes their members to diseases such as Familial Platelet Disorder (FPD) and Acute Myeloid Leukemia (AML). AML is an aggressive cancer of the white blood cells, whereas in FPD, the ability to produce blood clots which is required to stop bleeding is impaired. Prior to this study, it was completely unclear why changes in just one gene cause so many different diseases.”

The team concluded that their results demonstrate that different classes of mutant RUNX1 proteins use unique multifactorial mechanisms to cause disease and so development of novel treatments will require an individual approach. The study was published on January 4, 2021 in the journal Life Science Alliance.