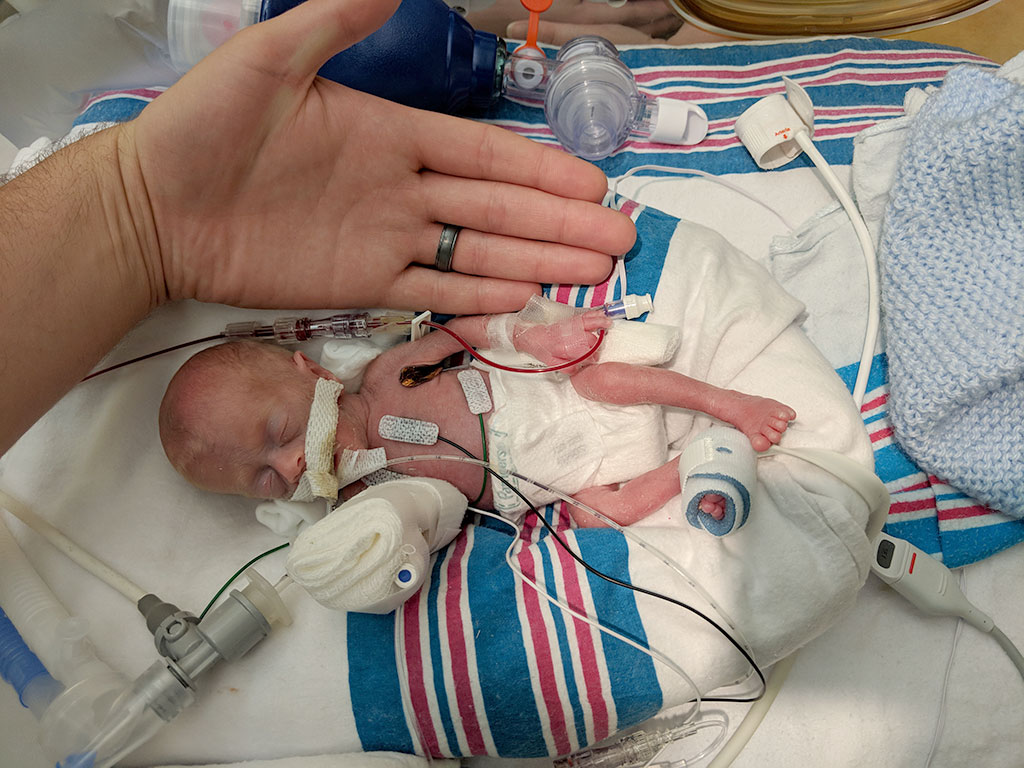 Image: An newborn infant at 26 weeks: for most preterm babies, a higher hemoglobin threshold for red-cell transfusion did not improve survival without neurodevelopmental impairment (Photo courtesy of Jaimie and John Florio)
Very preterm infants (born before 29 weeks of pregnancy) and those weighing less than 1,000 grams are at high risk for anemia because of their early stage of development, reduced ability to produce red blood cells, and need for blood sampling as part of their intensive medical care.

Previous studies suggest that anemic infants who received transfusions at a higher hemoglobin threshold within the currently accepted range would have a lower risk of death or developmental problems. Measuring hemoglobin indicates the proportion of red blood cells. Hemoglobin transfusion thresholds for preterm infants vary according to weight, stage of maturity and other factors.

A multicenter study led by the Children's Hospital of Philadelphia (Philadelphia, PA, USA) performed an open trial in which infants with a birth weight of 1,000 grams or less and a gestational age between 22 weeks 0 days and 28 weeks 6 days were randomly assigned within 48 hours after delivery to receive red-cell transfusions at higher or lower hemoglobin thresholds until 36 weeks of postmenstrual age or discharge, whichever occurred first. The primary outcome was a composite of death or neurodevelopmental impairment (cognitive delay, cerebral palsy, or hearing or vision loss) at 22 to 26 months of age, corrected for prematurity.

A total of 1,824 infants (mean birth weight, 756 g; mean gestational age, 25.9 weeks) underwent randomization. There was a between-group difference of 1.9 g/dL in the pre-transfusion mean hemoglobin levels throughout the treatment period. Primary outcome data were available for 1,692 infants (92.8%). Of 845 infants in the higher-threshold group, 423 (50.1%) died or survived with neurodevelopmental impairment, as compared with 422 of 847 infants (49.8%) in the lower-threshold group (relative risk adjusted for birth-weight stratum and center, 1.00). At 2 years, the higher- and lower-threshold groups had similar incidences of death (16.2% and 15.0%, respectively) and neurodevelopmental impairment (39.6% and 40.3%, respectively). At discharge from the hospital, the incidences of survival without severe complications were 28.5% and 30.9%, respectively. Serious adverse events occurred in 22.7% and 21.7%, respectively.

The authors concluded that in extremely-low-birth-weight infants, a higher hemoglobin threshold for red-cell transfusion did not improve survival without neurodevelopmental impairment at 22 to 26 months of age, corrected for prematurity. The study was published on December 31, 2020 in the journal The New England Journal of Medicine.