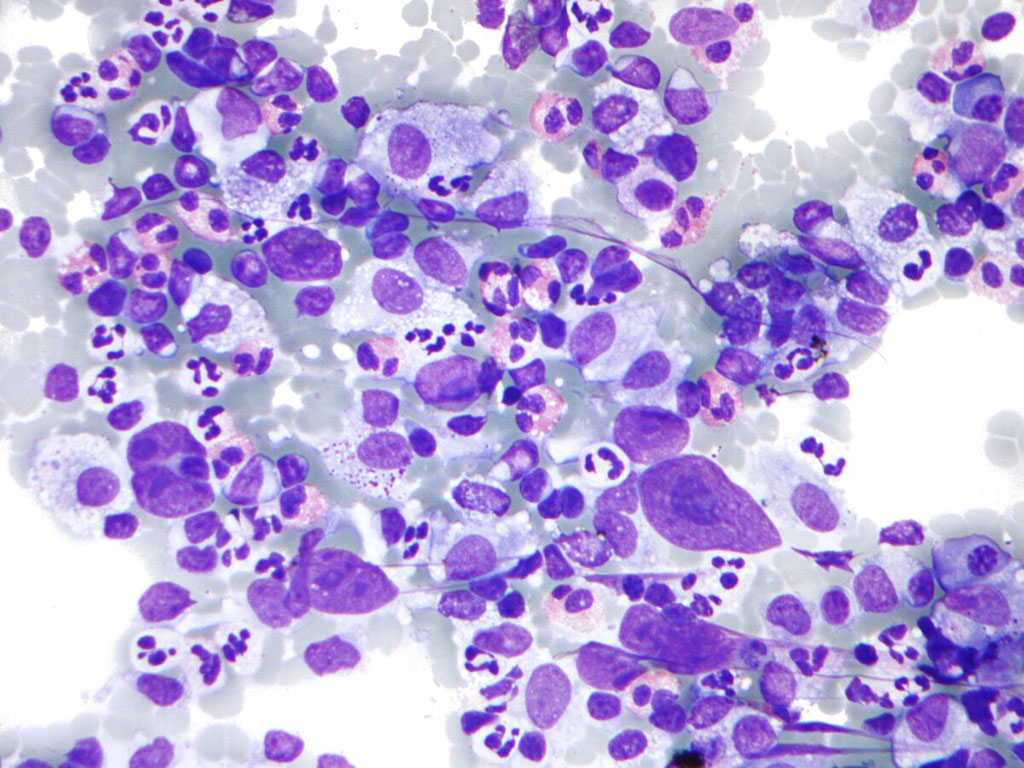 Image: Photomicrograph of Hodgkin lymphoma (HL), from a fine needle aspiration of a lymph node, which shows a mixture of cells common in HL: Eosinophils, Reed-Sternberg cells, Plasma cells, and Histocytes (Photo courtesy of Nephron).
Hodgkin lymphoma (HL) is a type of lymphoma in which cancer originates from a specific type of white blood cells called lymphocytes. Symptoms may include fever, night sweats, and weight loss. Often there will be non-painful enlarged lymph nodes in the neck, under the arm, or in the groin.

Hodgkin lymphoma may be treated with chemotherapy, radiation therapy, and stem cell transplant. The choice of treatment often depends on how advanced the cancer has become and whether or not it has favorable features. In early disease, a cure is often possible. PD-1 blockade is highly effective in classical Hodgkin lymphomas (cHLs), which exhibit frequent copy-number gains of CD274 (PD-L1) and PDC1LG2 (PD-L2) on chromosome 9p24.1.

A team of medical oncologists collaborating with the Dana-Farber Cancer Institute (Boston, MA, USA) used T cell receptor (TCR) sequencing and cytometry by time-of-flight (CyTOF) analysis to obtain a peripheral immune signature of responsiveness to PD-1 blockade in 56 patients treated with nivolumab in the CheckMate 205 phase II clinical trial. The TCR sequences for the study were processed through the immunoSEQ platform (Adaptive Biotechnologies, Seattle, WA, USA).

The scientists reported that anti-PD-1 therapy was most effective in patients with a diverse baseline TCR repertoire and an associated expansion of singleton clones during treatment. They also noted that CD4+ TCR diversity significantly increased during therapy, most prominently in patients who had achieved complete responses, but did not make the same observation for CD8+ TCR diversity. Further, the scientists said, patients who responded to therapy had an increased abundance of activated natural killer (NK) cells and a newly identified subset of CD3- CD68+ CD4+ GrB+ cells.

The investigators also found the trial patients had no significant differences in ratios of input CD4+ and CD8+ T cells or total detected CD4+ and CD8+ TCR sequences at baseline, but that peripheral CD4+ TCR repertoire diversity was significantly higher in healthy donors than in patients with newly diagnosed or relapsed or refractory cHL. While baseline CD4+ TCR diversity was not significantly different in newly diagnosed patients and those with relapsed or refractory disease who had complete responses to nivolumab, it was significantly lower in patients with partial responses or progressive disease. They saw similar patterns in baseline CD8+ TCR diversity.

The authors concluded that their studies highlighted the roles of recently expanded, clonally diverse CD4+ T cells and innate effectors in the efficacy of PD-1 blockade in cHL. The study was published on August 10, 2020 in the journal Nature Medicine.