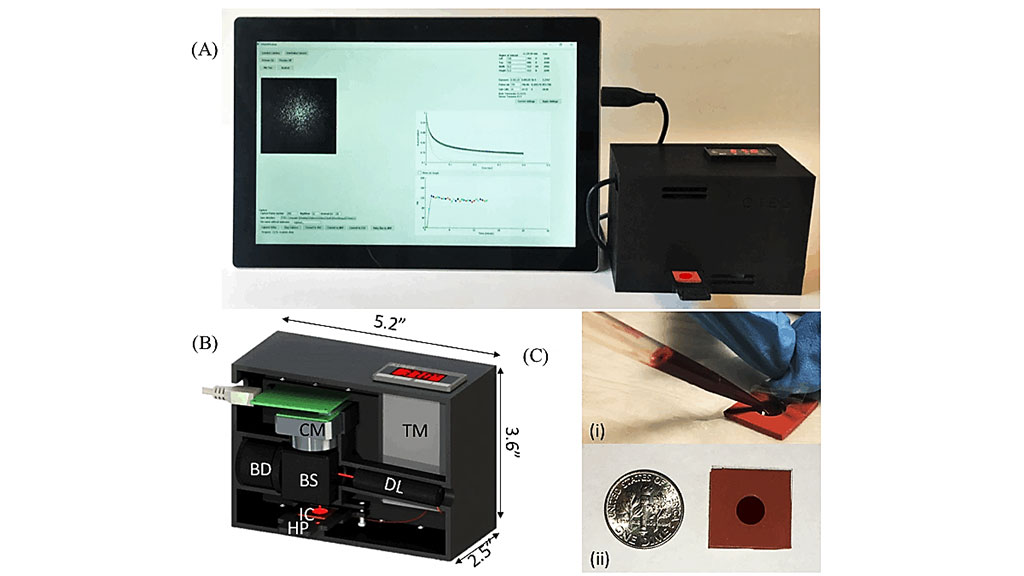 Image: A novel LSR-based coagulation sensor called iCoagLab has been favorably compared to thromboelastography to estimate bleeding risk (Photo courtesy of Massachusetts General Hospital).
Clotting disorders occur when the body is unable to make sufficient amounts of the proteins that are needed to help the blood clot, stopping bleeding. These proteins are called clotting factors (coagulation factors). All clotting factors are made in the liver which requires vitamin K to make some of the clotting factors.

Delayed identification of coagulopathy and bleeding increases the risk of organ failure and death in hospitalized patients. Timely and accurate identification of impaired coagulation at the point-of-care can proactively identify bleeding risk and guide resuscitation, resulting in improved outcomes for patients.

Photomedicine Scientists at the Massachusetts General Hospital (Boston, MA, USA) and their medical colleagues tested the accuracy of a novel optical coagulation sensing approach, termed iCoagLab, for comprehensive whole blood coagulation profiling and investigate its diagnostic accuracy in identifying patients at elevated bleeding risk. Whole blood samples from 270 patients undergoing conventional coagulation testing were measured using the iCoagLab device. The iCoagLab test involves the use of an inexpensive laser that can illuminate a few drops of blood taken from a patient. Fluctuations made visible by the laser indicate whether the blood can properly clot.

The iCoagLab instrument was based on the principles of laser speckle rheology (LSR), a recent optical approach that measures the viscoelastic properties of soft tissues from laser speckle pattern. Recalcified and kaolin-activated blood samples were loaded in disposable cartridges and time-varying intensity fluctuation of laser speckle patterns were measured to quantify the clot viscoelastic modulus during coagulation. Coagulation parameters including the reaction time (R), clot progression time (K), clot progression rate (α), and maximum clot strength (MA) were derived from clot viscoelasticity traces and compared with mechanical thromboelastography (TEG).

In all patients, a good correlation between iCoagLab- and TEG-derived parameters was observed. Multivariate analysis showed that iCoagLab-derived parameters identified bleeding risk with sensitivity of 94%, identical to TEG, and diagnostic accuracy (89%) that was higher than TEG (87%). The diagnostic specificity of iCoagLab (77%) was significantly higher than TEG (69%).

Seemantini K. Nadkarni, PhD, an associate professor and senior author of the study, said, “Clinicians in the operating room or the ICU often walk a thin line to maintain the delicate balance between bleeding and coagulation. The iCoagLab innovation will likely advance clinical capability to rapidly identify patients with defective clotting at the point-of-care, assess risk of hemorrhage, and tailor treatments based on individual coagulation deficits to help prevent life-threatening bleeding in patients.”

The authors concluded that by rapidly and comprehensively permitting blood coagulation profiling the iCoagLab innovation is likely to advance the capability to identify patients with elevated risk for bleeding, with the ultimate goal of preventing life-threatening hemorrhage. The study was published on June 22, 2020 in the journal Thrombosis and Haemostasis.