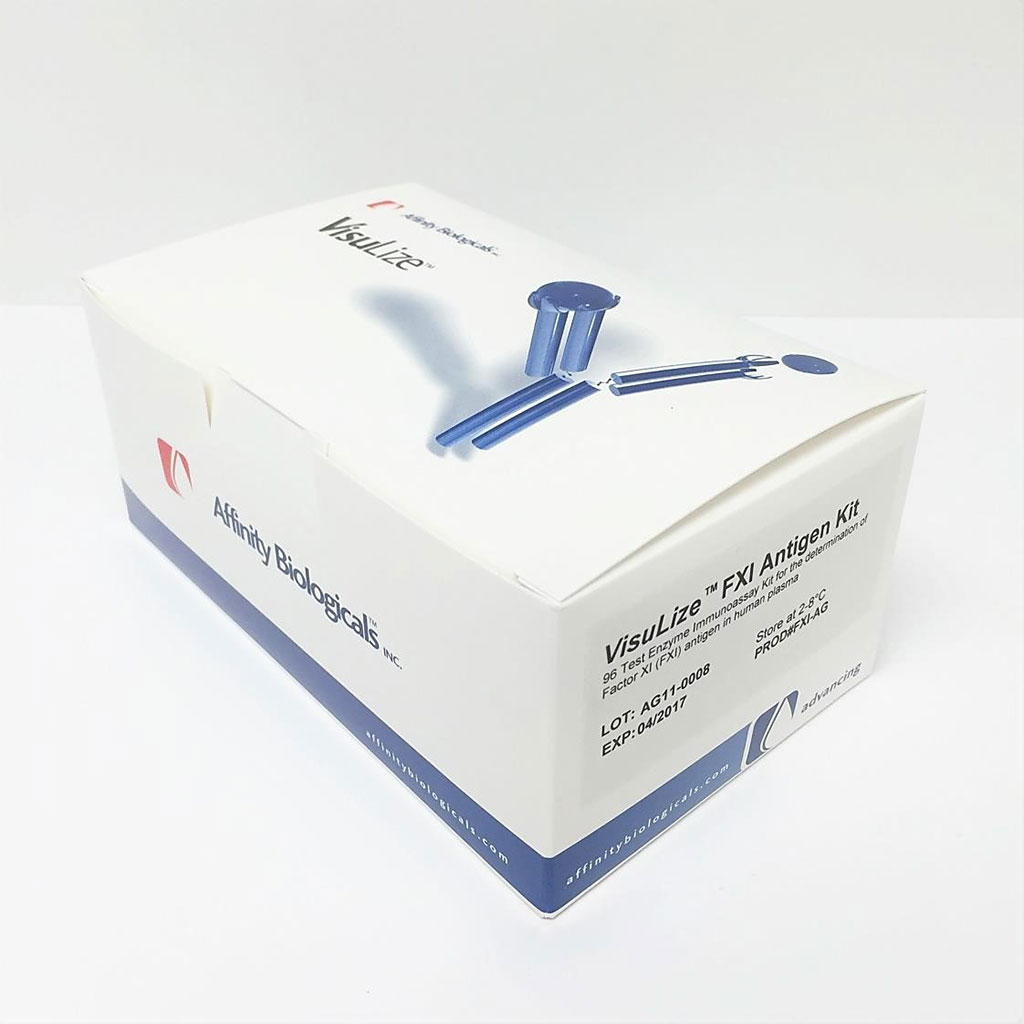 Image: The VisuLize Factor XI ELISA Kit is an Enzyme Immunoassay for the quantitative determination of Factor XI Antigen in human plasma samples using the double antibody enzyme linked immuno-sorbent assay (ELISA) (Photo courtesy of Affinity Biologicals, Inc).
Hemophilia B is a blood clotting disorder causing easy bruising and bleeding due to an inherited mutation of the gene for factor IX, and resulting in a deficiency of factor IX. It is less common than factor VIII deficiency (hemophilia A).

Specific genetic changes may account for a larger proportion than previously thought of children with severe hemophilia B who develop inhibitors against coagulation factor IX replacement therapy. Factor IX replacement therapy is standard for hemophilia B patients to supply them with the missing clotting factor. However, some patients, almost exclusively those with severe disease, develop inhibitors (an immune response) against the therapy which can severely block its effectiveness and lead to treatment resistance.

An international team of scientists led by the Medical University of Vienna (Vienna, Austria) evaluated the frequency of inhibitor development and allergic reactions in children with severe hemophilia B, as well as the effect of F9 mutations on the risk of developing inhibitors, using data from the PedNet Haemophilia Registry (Baarn, in The Netherlands). The team analyzed the demographic and clinical data of 154 untreated children with severe hemophilia B for up to 500 days of primary prophylaxis (preventive replacement treatment at an early age, before symptom onset).

During the first 50 days of treatment, and then annually, detailed data was collected about the presence of inhibitors (at least two consecutive blood samples positive for inhibitors) and allergic reactions. Most children (80%) were Caucasian, and about half of them had a history of hemophilia in the family. The children started preventive treatment at a median age of 9.6 months, and 77% of them were followed until 50 days of treatment, 75% until 75 days, 68% until 150 days, and 43% until 500 days of treatment.

The data showed that the risk of developing inhibitors was increased by 26.9% in children carrying nonsense F9 mutations and by 33.3% in those carrying large F9 deletions. The team hypothesized that the high proportion of missense mutations (resulting in some levels of factor IX protein) in severe hemophilia B patients is behind the overall low frequency of inhibitor development, compared to that of hemophilia A patients (25%–35%). In addition, allergic reactions associated with inhibitor development were reported in four children (28.6%), one of them having high levels of factor IX inhibitors. Two of them carried nonsense mutations, one had a large deletion, and one had an unknown mutation.

The study was published on January 9, 2020 in the journal Haematologica.