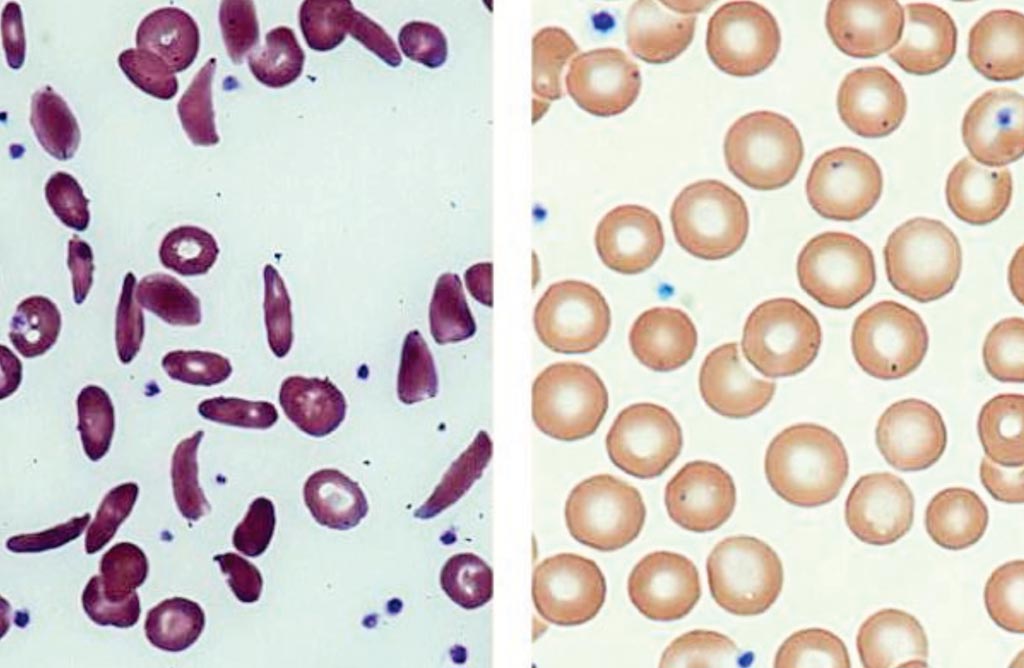 Image: Blood drawn from a sickle cell patient (left) and from a patient after stem-cell transplant (right) (Photo courtesy of NIH Molecular and Clinical Hematology Branch).
Sickle cell disease is a group of disorders that affects hemoglobin, the molecule in red blood cells that delivers oxygen to cells throughout the body. People with this disorder have atypical hemoglobin molecules called hemoglobin S, which can distort red blood cells into a sickle, or crescent, shape.

Hematologists at the Medical College of Wisconsin (Milwaukee, WI, USA) and their associates aimed to compare the relative risk of donor type and conditioning regimen intensity on the transplantation outcomes of in patients with sickle cell disease. They collected data from 90 centers in the USA. Eligible patients were younger than 50 years, had genetically confirmed sickle cell disease (Hb SS) or sickle beta thalassemia (Hb Sβ), and underwent allogeneic hematopoietic cell transplantation between January 15, 2008, and December 28, 2017.

The authors concluded that their data suggests that event-free survival is improved in patients with sickle cell disease who receive an allogenic transplantation at age 12 years or younger and those with an HLA-matched sibling donor. For patients without a matched sibling available for transplantation, the data did not favor one alternative donor type over another in this setting. The study was published on November 1, 2019, in the journal Lancet Haematology.