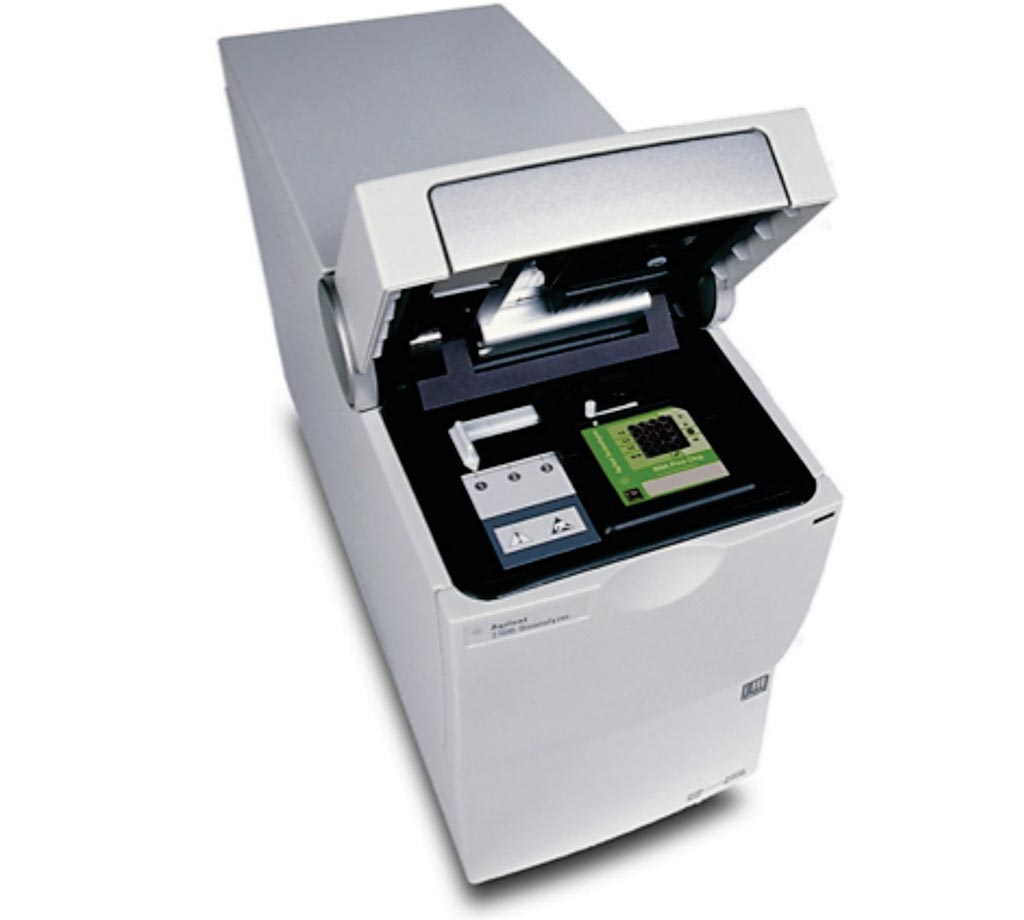 Image: The Bioanalyzer 2100 system is a microfluidic platform that provides quantitation and quality control of DNA and RNA by capillary electrophoresis (Photo courtesy of Agilent Technologies).
Multiple myeloma is the second most common hematological cancer, which affects terminally differentiated antibody secreting B cells, known as plasma cells. Clinical manifestations of myeloma include hypercalcemia, anemia, renal failure, and lytic bone lesions.

Genetic analyses of myeloma over the last quarter century have revealed a bifurcation of founding genetic alterations with approximately half of myelomas containing an immunoglobulin heavy chain (IgH) translocation. The other myelomas are hyperdiploid, which is an aneuploidy of chromosomes 3, 5, 7, 9, 11, 15, 19 and 21.

RNA-seq libraries were constructed with the TruSeq RNA Library Prep Kit v2, which yields unstranded mRNA libraries. The team used 150–2000 ng of RNA, which had an RNA integrity number of eight or higher for starting material. RNA libraries were amplified for 8–10 cycles and then sequenced on an Illumina HiSeq2000 or HiSeq2500 using v3 or v4 chemistry and 82 bp paired-end reads. Many other procedures and methods were also used.

A comprehensive analysis of structural variants in multiple myeloma was conducted using long-insert whole-genome paired-end sequencing performed on DNA isolated from CD138+ myeloma cells and normal peripheral blood to determine cancer-specific somatic alterations. The results of the study suggested that rearrangements that linked IgL to oncogenes such as MYC are associated with resistance to a standard multiple myeloma treatment called lenalidomide. Multiple myeloma patients with the risky IgL translocations also had shorter-than-usual survival times, the investigators reported, and were about half as likely to survive for at least three years compared to IgL-translocation-free cases.

With the help of chromatin immunoprecipitation sequencing on three myeloma cell lines expressing IgK, IgL, or translocated IgL, the authors found that the IgL locus contains multiple strong enhancer elements that are bound by the Ikaros transcription factor-coding gene (IKZF1). Even so, available patient data indicated that the multiple myeloma cases marked by IgL translocations did not seem to respond to so-called immunomodulatory imide (IMiD) drugs that target IKZF1.

From these and other data, the authors concluded that IgL-MYC translocations as a marker of poor prognosis, independent of other genetic abnormalities, with implications for diagnosis and treatment. The study was published on April 23, 2019, in the journal Nature Communications.