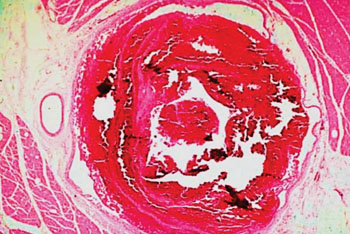 Image: A histopathology of a venous thrombus in a leg muscle (Photo courtesy of Nigel Lang).
It has been proposed that hospital patients, who have already been diagnosed with venous thromboembolisms or VTEs, do not need a positive genetic test to justify taking medication and making other changes to prevent future ones.

The hereditary thrombophilias are a group of inherited conditions that predispose to thrombosis. Heritable deficiencies of the endogenous anticoagulants protein C, protein S, and antithrombin have been recognized for some years, but their prevalence, even among patients with familial thrombosis, is low.

Scientists at the University of Michigan Medical School (Ann Arbor, MI, USA) have reviewed the ordering of inherited thromboembolism testing on inpatients. There are several tests for several traits, so patients often get them in combination, what's called a hypercoagulable workup. But if doctors are following guidelines grounded in evidence, the test result should rarely change a patient's care. Often, it appears, the test gets ordered to satisfy curiosity about why a patient had a VTE, to see if they are among the 7% of Americans with a genetic mutation that makes blood more prone to clot. So, except in very specific cases where such clots are highly likely, such as women with a family history of clots who are pregnant or getting hormone replacement therapy, there is little reason to do the test at all for inherited thrombophilia.

Ideally, genetic tests to find out whether someone carries a certain genetic trait should be used when there is clear information about the risks, benefits and costs of that test. However the team illustrated the situation by applying this information to a hypothetical case of a young patient with a VTE but no family history who suffers a pulmonary embolism, a dangerous health emergency where clots form in the lower extremities and travel to the lungs, potentially cutting off oxygen to the body unless treatment starts quickly.

The scientists note the conclusions about VTE prevention and treatment that have been reached by several medical bodies that recommend against giving clot-prevention medication to people with the genetic trait but no VTE history. Lauren Heidemann, MD, an assistant professor of medicine and first co-author, said, “Physicians and patients should resist the temptation to perform costly search for an underlying genetic cause of venous thrombosis.” The study was published on October 26, 2016, in the Journal of Hospital Medicine.