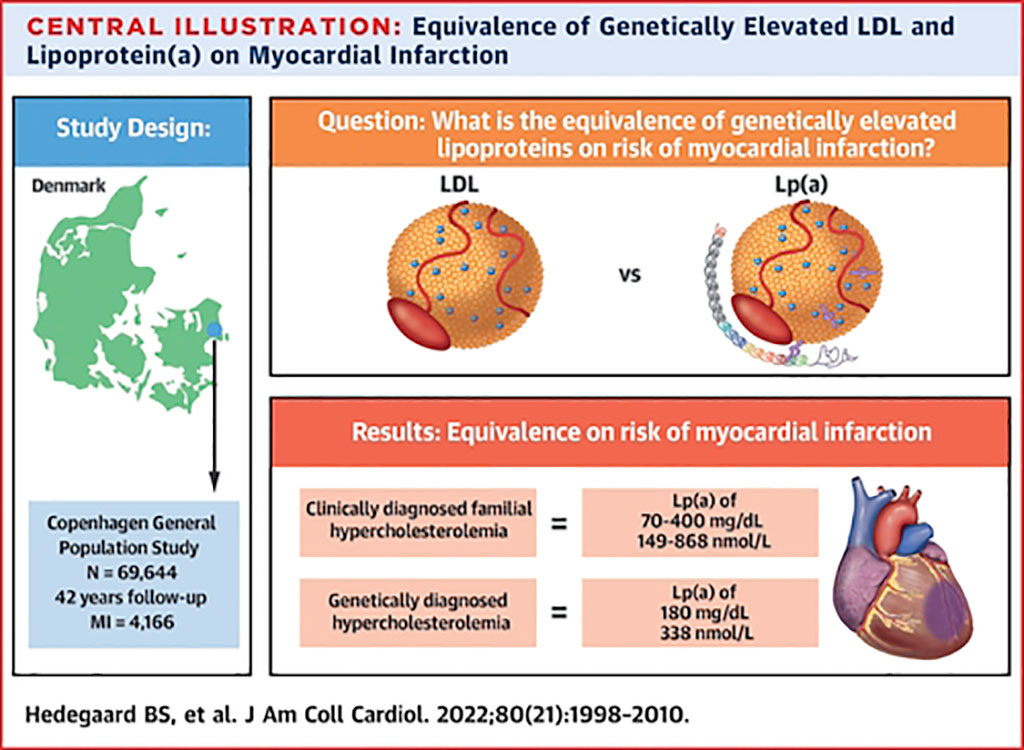 Genetically elevated plasma lipoprotein(a) and familial hypercholesterolemia each result in premature atherosclerotic cardiovascular disease (ASCVD); however, a direct comparison in the same population is needed of these two genetic traits on the risk of ASCVD.

Clinical Biochemists at the Viborg Regional Hospital (Viborg, Denmark) and their colleagues determined the level of plasma lipoprotein(a) that is equivalent to low-density lipoprotein (LDL) cholesterol in clinically and genetically diagnosed familial hypercholesterolemia on risk of myocardial infarction and ASCVD. They examined the CGPS (Copenhagen General Population Study) with determination of lipoprotein(a) and familial hypercholesterolemia in 69,644 individuals followed for 42 years, during which time, 4,166 developed myocardial infarction and 11,464, ASCVD. Lipid levels were measured using blood samples drawn in the non-fasting state.

Berit Storgaard Hedegaard, RN, the lead author of the study, said, “The present direct comparison of conventionally diagnosed elevated plasma lipoprotein(a) with clinical and genetic FH in the same population provides for the first time the levels of plasma lipoprotein(a) that are equivalent to LDL cholesterol in FH on risk of MI and ASCVD.”

The authors concluded that lipoprotein(a) levels equivalent to LDL cholesterol in clinical and genetic familial hypercholesterolemia were 67 to 402 mg/dL and 180 mg/dL, respectively, for myocardial infarction and 130 to 391 mg/dL and 175 mg/dL, respectively, for ASCVD. They emphasized the importance of measuring lipoprotein(a) in patients with FH as well as the importance of evaluating patients with elevated lipoprotein(a) for FH. The study was published in the November 2022 issue of the Journal of the American College of Cardiology.