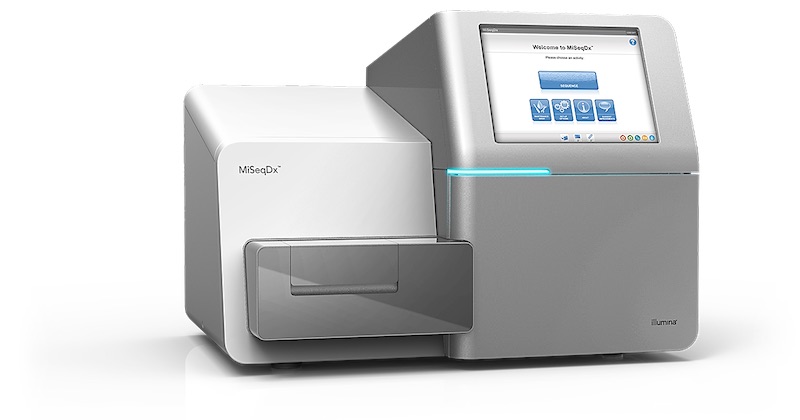 The MiSeqDx System is the first FDA-regulated, CE-IVD-marked, NGS platform for in vitro diagnostic (IVD) testing (Photo courtesy of Illumina)
Type 2 diabetes (T2D) is a common complex metabolic disorder. Currently, more than 380 million people live with type 2 diabetes globally, and this number is expected to increase to more than 550 million by 2030.

A multidisciplinary international team of scientists led by those at the Erasmus University Medical Center (Rotterdam, the Netherlands) examined associations of gut microbiome composition with insulin resistance and T2D in a large population-based setting controlling for various sociodemographic and lifestyle factors. The team carried out a cross-sectional analysis included 2,166 participants from two Dutch population-based prospective cohorts.
The investigators used an automated stool DNA isolation kit (Diasorin, Saluggia, Italy) to isolate bacterial DNA. The V3 and V4 hypervariable regions of the bacterial 16S ribosomal RNA gene were amplified and sequenced on the MiSeq platform (Illumina, San Diego, CA, USA). Serum insulin was measured by electrochemiluminescence immunoassay technology. In one study, glucose levels were measured by hydrogen 1 nuclear magnetic resonance, and serum insulin was measured on an architect system (Abbott Laboratories, Lake Forest, IL, USA). Associations among α diversity, β diversity, and taxa with the Homeostatic Model Assessment of Insulin Resistance (HOMA-IR) and with type 2 diabetes were examined.

The investigators reported that lower microbiome Shannon index and richness were associated with higher HOMA-IR (e.g., Shannon index, −0.06; 95% CI, −0.10 to −0.02), and patients with type 2 diabetes had a lower richness than participants without diabetes (odds ratio [OR], 0.93; 95% CI, 0.88-0.99). The β diversity)was associated with insulin resistance. A total of 12 groups of bacteria were associated with HOMA-IR or type 2 diabetes. There were five taxa whose higher abundance was tied to lower prevalence of T2D:Clostridiaceae 1, Peptostreptococcaceae, Clostridium sensu stricto 1, Intestinibacter, and Romboutsia. There were seven taxa whose greater abundance was associated with lower HOMA-IR including Christensenellaceae and Marvinbryantia.

The authors concluded that higher microbiome α diversity, along with more butyrate-producing gut bacteria, was associated with less T2D and with lower insulin resistance among individuals without diabetes. These findings could help provide insight into the etiology, pathogenesis, and treatment of T2D. The study was published on July 29, 2021 in the journal JAMA Network Open.