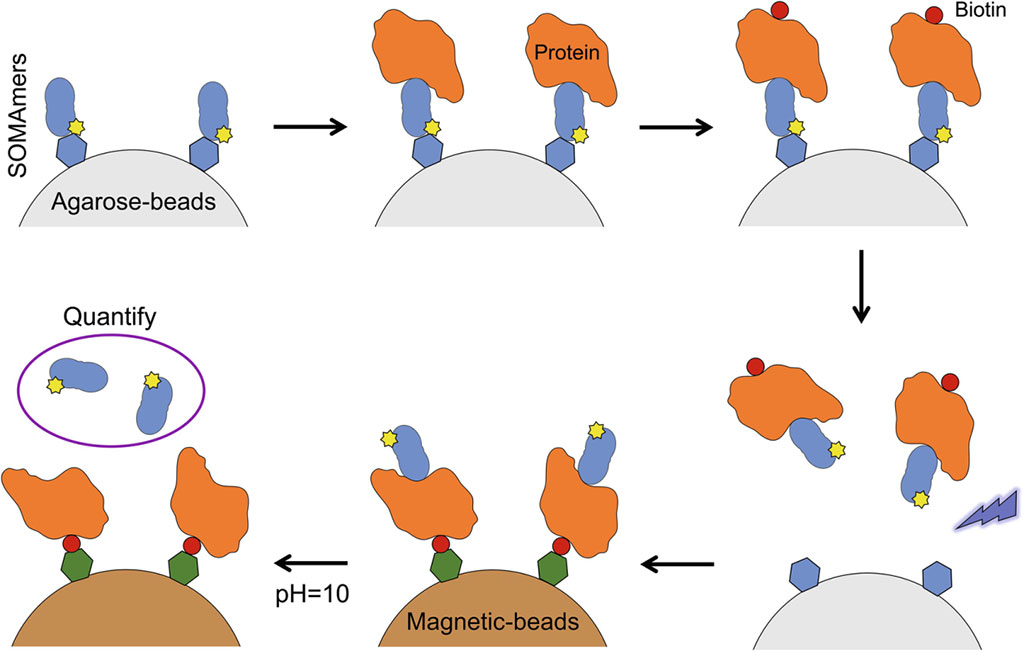 Image: The principle of SOMAscan Assay that allows for the simultaneous detection of 1,300 human proteins using SOMAmer (Slow Off-rate Modified Aptamer) protein-binding reagents (Photo courtesy of SomaLogic).
Autism spectrum disorder (ASD), a heterogeneous neurodevelopmental disorder, is characterized by deficits in social communication and social interaction, with restricted, repetitive patterns of behavior, interests, or activities. ASD impacts at least one out of every 59 children in the USA, although this is likely an underestimation.

Many blood-based biomarker candidates have been investigated, including neurotransmitters, cytokines, and markers of mitochondrial dysfunction, oxidative stress, and impaired methylation. However, given the prevalence of ASD, the use of machine learning to incorporate demographic and clinical data into the analysis could more powerfully examine disease status and symptom severity.

A fasting blood draw was performed on ASD and TD subjects between the hours of 8–10 AM in a 3.5 mL Serum Separation Tube using standard venipuncture technique. The SOMAScan platform 1.3k was used for analysis, and assays were run (SomaLogic, Boulder, CO, USA). SOMAmer aptamer reagents consist of short single-stranded DNA sequences with ‘protein-like’ appendages that allow tight and specific binding to protein targets. More than 1,100 proteins were examined using the SomaLogic protein analysis platform. A panel of nine proteins was identified as optimal for predicting ASD using three computational methods. The scientists then evaluated the biomarker panel for quality using machine learning methods.

The team reported that five proteins were common to all three prediction models used: mitogen-activated protein kinase 14 (MAPK14), immunoglobulin D (IgD), dermatopontin (DERM), ephrin type-B receptor 2 (EPHB2), and soluble urokinase-type plasminogen activator receptor (suPAR). These five proteins were defined as core proteins. Four proteins providing additive power were combined with the five core proteins, and together, the nine proteins resulted in an AUC of 86% (sensitivity 83%; specificity 84%). These proteins have pathway significance related to a number of processes, including negative regulation of CD8+, alpha-beta T cell proliferation, immune response, neuron projection retraction, MAPK14 activity, and glutamate receptor signaling, all of which have previously been associated with ASD.

Dwight German, PhD, a Professor of Psychiatry and senior author of the study, said, “The more significantly affected the child is, the higher or lower than normal the blood biomarker is. Ideally, there will be a day when a child is identified using blood biomarkers as being at risk for developing ASD and therapies can be started immediately. That would help the child develop skills to optimize their communication and learning.”

The authors concluded that all nine proteins were significantly different in ASD compared with TD boys, and were significantly correlated with ASD severity as measured by Autism Diagnostic Observation Schedule (ADOS) total scores. Using machine learning methods, a panel of serum proteins was identified that may be useful as a blood biomarker for ASD in boys. The study was published on February 24, 2021 in the journal PLOS ONE.