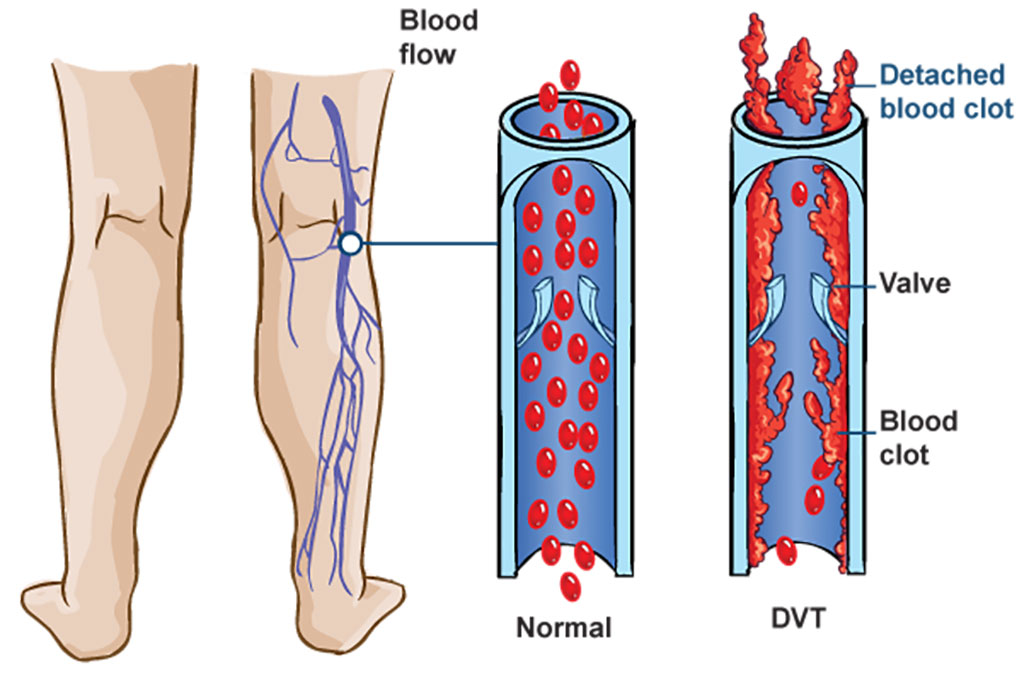 Image: Schematic diagram of deep vein thrombosis (DVT) that is associated with metabolic syndrome (Photo courtesy of MediConnect).
People with metabolic syndrome which are a set of conditions including obesity, impaired glucose metabolism, elevated levels of fats and cholesterol in the blood, and high blood pressure, are more likely to experience recurrent blood clots.

Among patients diagnosed with a type of blood clot known as deep vein thrombosis (DVT), those who also had markers of metabolic syndrome were more likely to experience another venous thromboembolism (VTE) event. Furthermore, as the number of metabolic syndrome conditions that the patients exhibited increased, so too did their likelihood of experiencing VTE recurrence.

Medical scientists from the Indiana University School of Medicine (Indianapolis, IN, USA;) used a statewide database analyze 151,054 patients diagnosed with DVT from 2004 to 2017. They examined four metabolic syndrome components: hypertension (high blood pressure), hyperlipidemia (high levels of fat in the blood), diabetes (high levels of sugar in the blood), and obesity.

Lauren K. Stewart, MD, an associate professor and first author of the study, said, “Our aim was to improve understanding of the effect of metabolic syndrome on blood clot recurrence. If patients have VTE recurrence, their quality of life drops, and it drops a lot. We wanted to investigate possible comorbidities and factors that affect recurrence so we could stimulate the search for new potential treatments.” The study was published on January 9, 2020 in the journal Blood Advances