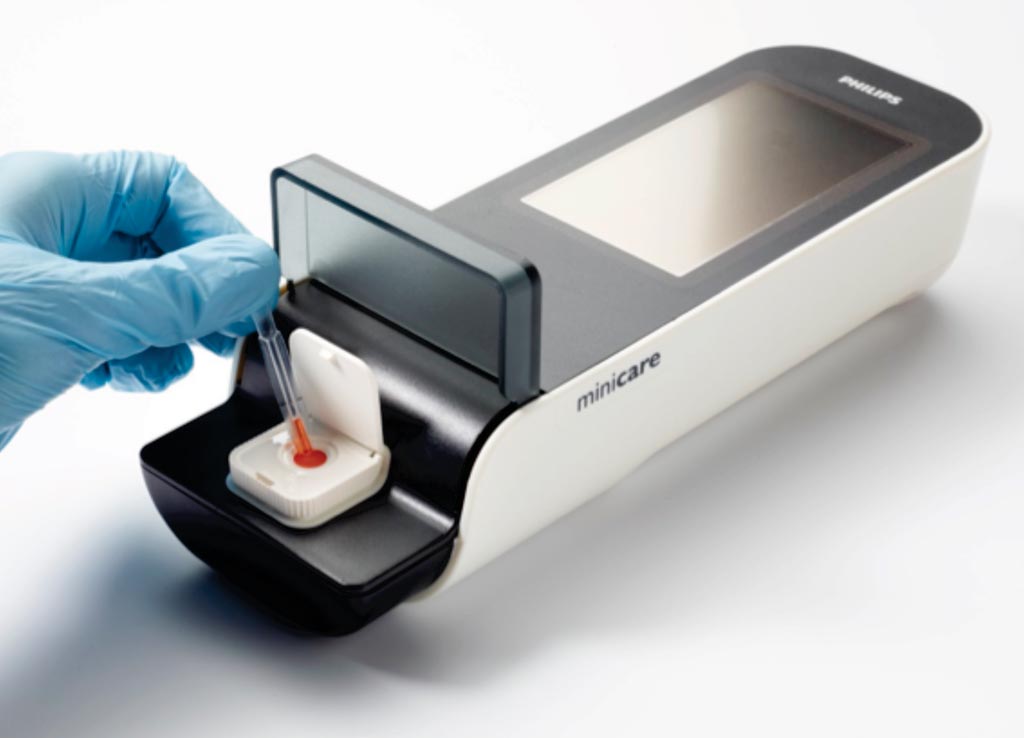 Image: The Minicare I-20 handheld diagnostics platform is designed to detect multiple target molecules at very low concentrations in a single ‘finger-prick’ blood sample, and display the results on a handheld analyzer within minutes (Photo courtesy of Philips Healthcare).
The measurement of circulating natriuretic peptides (NP) is considered to be a useful marker of myocardial function, and international guidelines recommend its use for the diagnosis of patients with heart failure (HF), and in particular ruling out the presence of HF.

An international team of scientists working with the Medical University of Innsbruck (Innsbruck, Austria) performed a comparison with a lab-testing system using samples from 187 patients. Normal values were determined based on 160 healthy adults, (94 males and 66 females; with 84 aged more than 55 years and 76 aged 55 years or less) with ages ranging from 19 to 70 years. Normal values were determined by testing EDTA whole blood and EDTA plasma samples.

The team compared the Minicare BNP with the Siemens ADVIA Centaur BNP, Alere Triage BNP and Abbott I-STAT BNP. The team tested and compared EDTA whole blood samples (on Minicare, Triage and I-STAT) and corresponding EDTA plasma samples (on Minicare and Centaur) from respectively 187 to 216 individuals with a BNP concentration range as measured using Minicare from 10 to 2,890 ng/L.

The scientists reported that the limit of quantitation (LoQ) in whole blood at 20% and 10% coefficient of variation (CV) was found < 9 ng/L and <30 ng/L respectively without significant differences between EDTA whole blood and EDTA plasma. Total CV was found to be from 6.7% to 9.7% for BNP concentrations between 92.6 and 3,984 ng/L. The sample type comparison study demonstrated correlation coefficients between 0.97 and 0.99 with slopes between 1.03 and 1.09 between the different samples. Method comparison between Minicare BNP and Siemens ADVIA Centaur BNP demonstrated a correlation coefficient of 0.92 with a slope of 1.06. The 97.5% upper reference limit (URL) of a healthy population was calculated to be 72.6 ng/L.

The authors concluded that the Minicare BNP assay under development is a fast, robust and sensitive test that can be used in a near-patient setting on capillary or EDTA venous whole blood sample. The Minicare BNP test has the potential for good clinical performance in the diagnosis of HF in various patient settings. The study was published in the May 2019 issue of the journal Practical Laboratory Medicine.