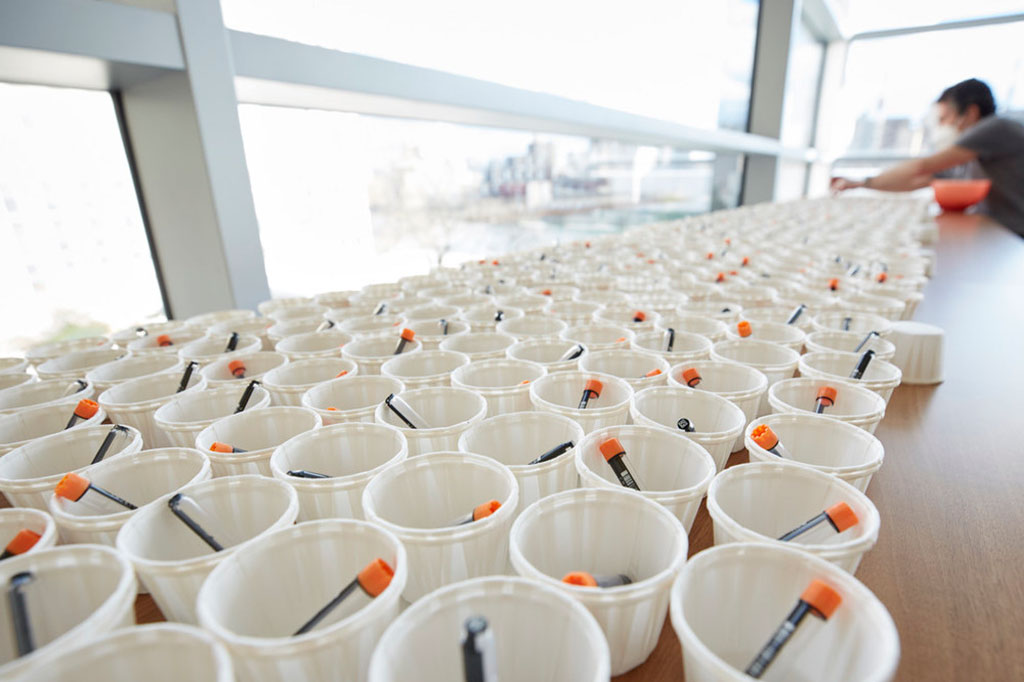 Image: Stored in orange-capped vials for mass distribution, the DRUL buffer is part of an inexpensive saliva-based COVID test developed at Rockefeller (Photo courtesy of The Rockefeller University)
A new study has confirmed that a saliva test for COVID-19 performs as well, if not better, than FDA-authorized nasal and oral swab tests.

The “DRUL” saliva test was developed in-house at The Rockefeller University (New York, NY, USA) to identify positive cases within the Rockefeller community. The assay has proven to be easier and safer to administer than the currently available tests, and has been used tens of thousands of times over the past nine months to identify and isolate infected individuals working on the university’s campus.

The DRUL test offered several advantages. It was safe as the test could be taken at home and sent to the lab in a transport medium that kills the virus upon contact. The assay was efficient as it used only off-the-shelf reagents, thus remaining unaffected by shortages that impacted other programs. The DRUL test was also inexpensive at USD 2 per test and was comfortable with the patient providing a sample by simply spitting in a cup.

In a direct head-to-head comparison of 162 individuals who received both Rockefeller’s “DRUL” saliva test and a conventional swab test, DRUL caught all of the cases that the swabs identified as positive - plus four positive cases that the swabs missed entirely. The researchers first assessed DRUL’s limit of detection - how many viral copies the test could catch per volume of fluid. The test succeeded in detecting a single viral particle in one microliter of saliva, a figure comparable to that of the most sensitive assays. The lab then ran 30 nasal swabs that had tested positive for COVID-19 through their novel testing platform and DRUL caught all 30. Next, in a direct challenge, the team compared 162 results from volunteers who received both a swab and a saliva test. Predictably, almost all came back negative. But four that were negative or indeterminate on the swab test were positive on the DRUL assay and, indeed, three of those samples belonged to volunteers who went on to develop symptomatic COVID.