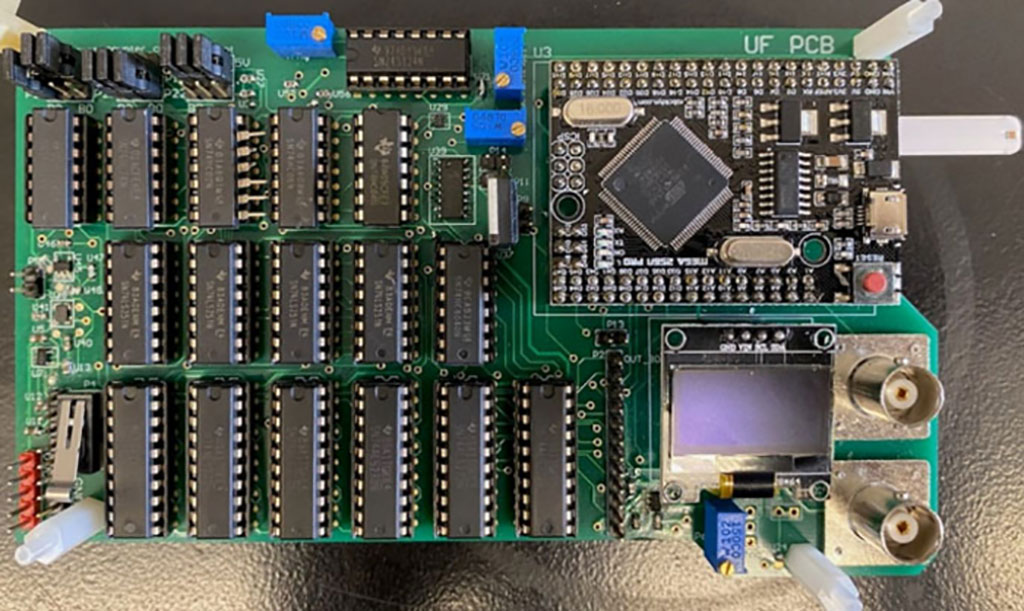 Image: Photo of the group’s circuit board for the biosensor (Photo courtesy of University of Florida)

Oral cancer is the 13th most common type of cancer globally, and oral squamous cell carcinomas (OSCCs) account for more than 90% of oral cancers. An estimated 300,000 new cases and 145,000 deaths worldwide were attributed to oral cancer in 2012. Since oral cancer occurs in one of the most accessible sites in the body, it can be easily treated if detected promptly. If caught early in the disease state, oral cancers that remain localized and are two centimeters or smaller can be cured and five-year survival rates exceed 90%. Now, researchers have developed a breakthrough hand-held biosensor that enables quick and accurate detection of oral cancer.

The biosensor developed by a group of researchers from the University of Florida (Gainesville, FL, USA) and National Yang Ming Chiao Tung University (Hsinchu, Taiwan) consists of a sensor strip, similar to a glucose strip, and a circuit board (a hand-held terminal like a glucometer) for detection.

"Typically, test fluid is introduced into a small liquid channel on the tip of the sensor strips," said Minghan Xian, co-author and a researcher at the University of Florida. "A few electrodes sit within the liquid channel, and the surface of these electrodes contain antibodies to specific proteins present within human oral cancer lesions. Short electrode pulses get sent through these electrodes during detection, and then the circuit board module analyzes this signal and outputs a four-digit number that correlates to its concentration."

As far as applications, there's tremendous interest within the sensor and medical communities to develop semiconductor- and electrochemical-based biomarker detection. The team is now looking forward to demonstrating their integrated solution for cancer and other disease detection via a hand-held point-of-care device with a short detection time and low detection limit. They also hope their work will inspire further research into this topic.

"The next step in this continuum is to conduct the analysis using in vivo samples of CIP2A – a biomarker of OSCC – in oral cancer and non-oral cancer patients with biopsy as a gold standard," added Xian.