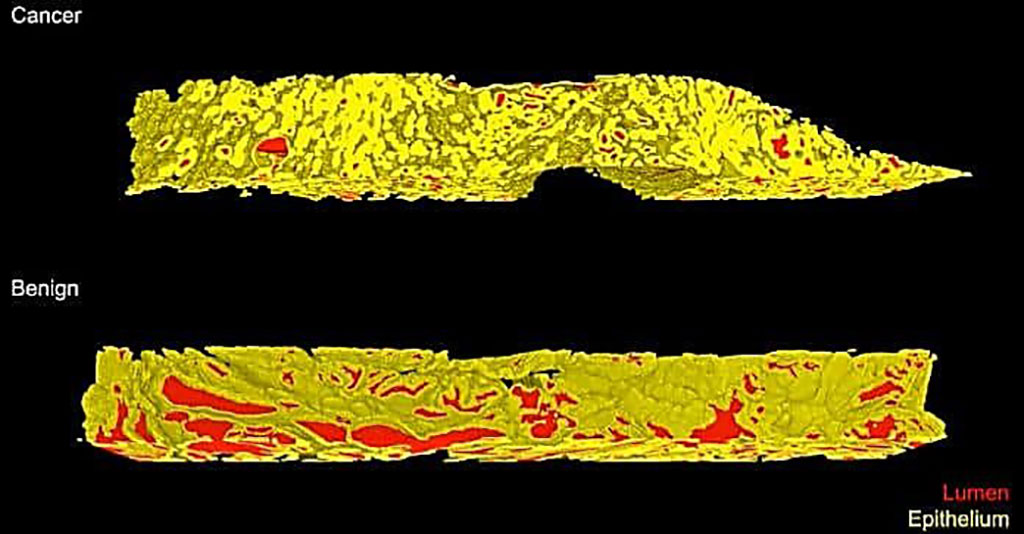 Image: A screenshot of a volume rendering of glands in two 3D biopsy samples from prostates (yellow: the outer walls of the gland; red: the fluid-filled space inside the gland). The cancer sample (top) shows smaller and more densely packed glands compared to the benign tissue sample (bottom) (Photo courtesy of Xie et al./Cancer Research)
Prostate cancer is the most common cancer for men and, for men in the USA, and it is the second leading cause of death. Prostate cancer treatment planning is largely dependent upon examination of core-needle biopsies. The microscopic architecture of the prostate glands forms the basis for prognostic grading by pathologists.

Some prostate cancers (PCas)might be slow-growing and can be monitored over time whereas others need to be treated right away. To determine how aggressive someone's cancer is, doctors look for abnormalities in histological specimens of biopsied tissue on a slide, but this 2D method makes it hard to properly diagnose borderline cases.

Biomedical Engineers at the University of Washington (Seattle, WA, USA) and their colleagues developed a workflow for non-destructive 3D pathology and computational analysis of whole prostate biopsies labeled with a rapid and inexpensive fluorescent analog of standard H&E staining. The team imaged 300 ex vivo biopsies extracted from 50 archived radical prostatectomy specimens, of which 118 biopsies contained cancer.

The biopsy cores were processed stained to mimic the typical staining used in the 2D method. The team then imaged each entire biopsy core using an open-top light-sheet microscope, which uses a sheet of light to optically “slice” through and image a tissue sample without destroying it. Multi-channel illumination was provided by a fourchannel digitally controlled laser package (Cobolt Skyra Lasers, HÜBNER Photonics, Kassel, Germany). Tissues were imaged at near Nyquist sampling of ∼0.44 μm/pixel. The volumetric imaging time was approximately 0.5 min per mm3 of tissue for each wavelength channel. This allowed each biopsy (~1 × 1 × 20 mm), stained with two fluorophores (T&E), to be imaged in ~20 minutes.

The scientists reported that the 3D images provided more information than a 2D image, specifically, details about the complex tree-like structure of the glands throughout the tissue. These additional features increased the likelihood that the computer would correctly predict a cancer's aggressiveness. They used new AI methods, including deep-learning image transformation techniques, to help manage and interpret the large datasets this project generated. The 3D glandular features in cancer biopsies were superior to corresponding 2D features for risk stratification of low- to intermediate-risk PCa patients based on their clinical biochemical recurrence (BCR) outcomes.

Jonathan Liu, PhD, a professor of mechanical engineering and of bioengineering and a senior author of the study, said, “We show for the first time that compared to traditional pathology, where a small fraction of each biopsy is examined in 2D on microscope slides, the ability to examine 100% of a biopsy in 3D is more informative and accurate. This is exciting because it is the first of hopefully many clinical studies that will demonstrate the value of non-destructive 3D pathology for clinical decision-making, such as determining which patients require aggressive treatments or which subsets of patients would respond best to certain drugs.”

The authors concluded that the results of this study support the use of computational 3D pathology for guiding the clinical management of prostate cancer. The study was published on December 1, 2021 in the journal Cancer Research.