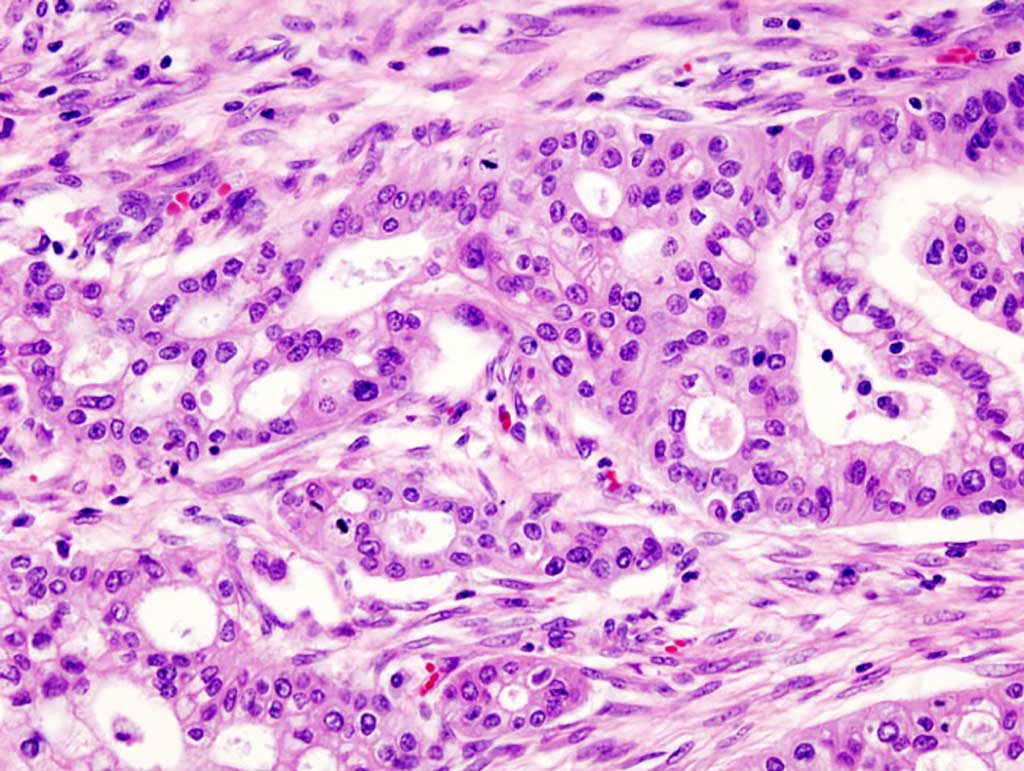 Image: Micrograph of pancreatic ductal adenocarcinoma (the most common type of pancreatic cancer) (Photo courtesy of Wikimedia Commons)
A team of cancer researchers has identified a microRNA (miRNA) signature panel that identifies patients at risk for pancreatic cancer metastasis to the lymph nodes.

There are usually no early symptoms for pancreatic cancer, and symptoms that are specific enough to suggest presence of the disease typically do not develop until it has reached an advanced stage. By this time pancreatic ductal adenocarcinomas (PDACs) frequently have metastasized to the lymph nodes. Therefore, strategies are needed to identify patients at highest risk for lymph node metastases.

MicroRNAs (miRNAs) comprise a class of about 20 nucleotides-long RNA fragments that block gene expression by attaching to molecules of messenger RNA in a fashion that prevents them from transmitting the protein synthesizing instructions they had received from the DNA. With their capacity to fine-tune protein expression via sequence-specific interactions, miRNAs help regulate cell maintenance and differentiation. In addition to miRNAs playing an essential role in tumor development, dysregulation of certain miRNAs has been associated with many different diseases, such as dementia, and cardiovascular conditions.

The investigators also analyzed samples collected by EUS-FNA before surgery from 47 patients (22 patients with lymph node metastases and 25 without; 17 for the training cohort and 30 from the validation cohort), and 62 specimens prior to any treatment from patients who received neoadjuvant chemotherapy (nine patients with lymph node metastasis and 53 without) for additional validation. The median follow-up was 5.5 years in the testing or training cohort and 2.8 years for the validation cohort.

"This may not seem like a high percentage but in a clinical setting, especially when we do not currently have a pancreatic cancer screening tool, this accuracy level has few equals," said senior author Dr. Ajay Goel, chairman of the department of molecular diagnostics and experimental therapeutics at the Beckman Research Institute of City of Hope Comprehensive Cancer Center. "If we know beforehand that these pancreatic cancer patients have lymph node metastases, we probably would not perform surgery because it is complicated, expensive and, most importantly, patients with lymph node spread do not do well after surgery. Instead, we would likely first treat the patient with chemotherapy to kill all the loose-hanging cells in the lymph nodes and then surgically remove the cancer from the pancreas."

The pancreatic cancer metastasis study was published in the May 3, 2020, online edition of the journal Gastroenterology.