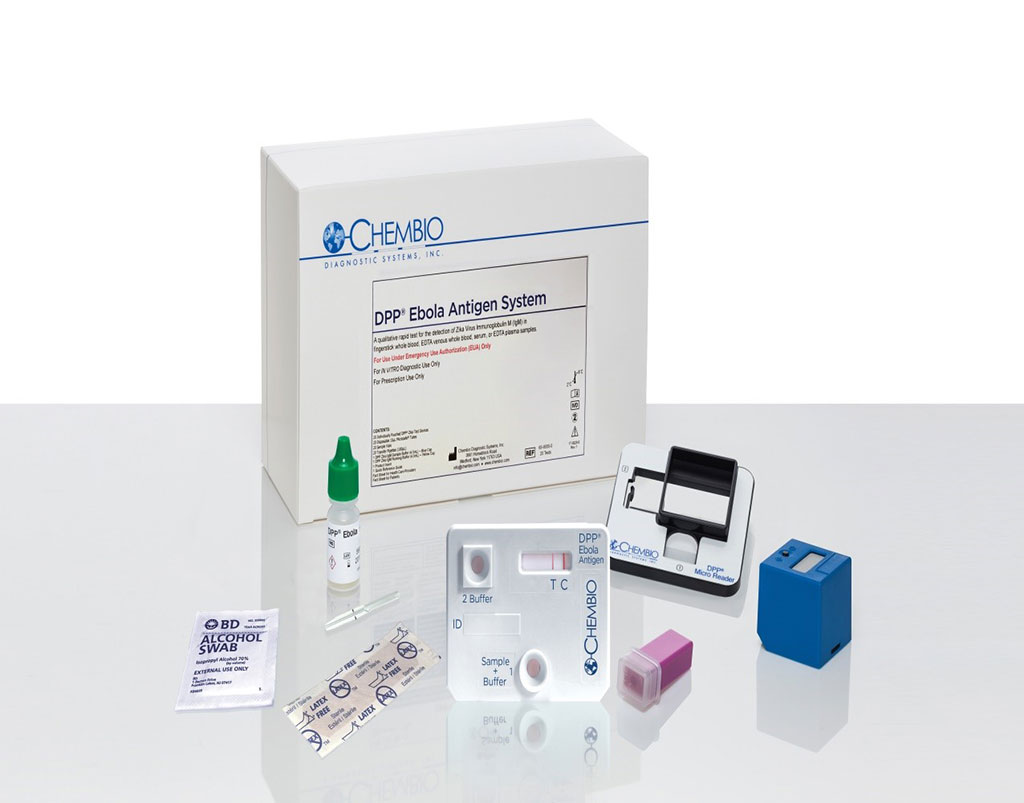 Image: DPP Ebola Antigen System is a 15 minute rapid test for detection of Ebola Virus Specific Antigen (Photo courtesy of Chembio Diagnostic Systems).
Ebola is a rare but deadly virus that causes fever, body aches, and diarrhea, and sometimes bleeding inside and outside the body. As the virus spreads through the body, it damages the immune system and organs. Ultimately, it causes levels of blood-clotting cells to drop.

Diagnosing Ebola virus disease (EVD) shortly after infection can be difficult. Early symptoms of EVD such as fever, headache, and weakness are not specific to Ebola virus infection and often are seen in patients with other more common diseases, like malaria and typhoid fever. Polymerase chain reaction (PCR) is one of the most commonly used diagnostic methods because of its ability to detect low levels of Ebola virus.

The investigators reported that all tests performed with high accuracy on samples with low Ct value (high viral load). The Fever Panel test performed with the highest accuracy, with a sensitivity of 89.9% and specificity of 90.6%. The Ebola and Ebola-Malaria tests performed comparably to each other: sensitivity was 77.1% and 78% respectively, and specificity was 91.7% for the Ebola test and 95.8% for the Ebola-Malaria test.

The authors concluded that their study had evaluated the accuracy of three novel rapid diagnostic tests for Ebola. The tests may have significant public health relevance, particularly the Fever Panel test, which detects seven pathogens including Ebola. Given limitations to the study resulting from uncertain sample quality, further evaluation is warranted. All tests performed with highest accuracy on samples with low Ct value (high viral load), and the data presented suggests that these RDTs may be useful for point-of-care diagnosis of cases in the context of an outbreak. The study was published on September 15, 2020 in the journal BMC Infectious Diseases.