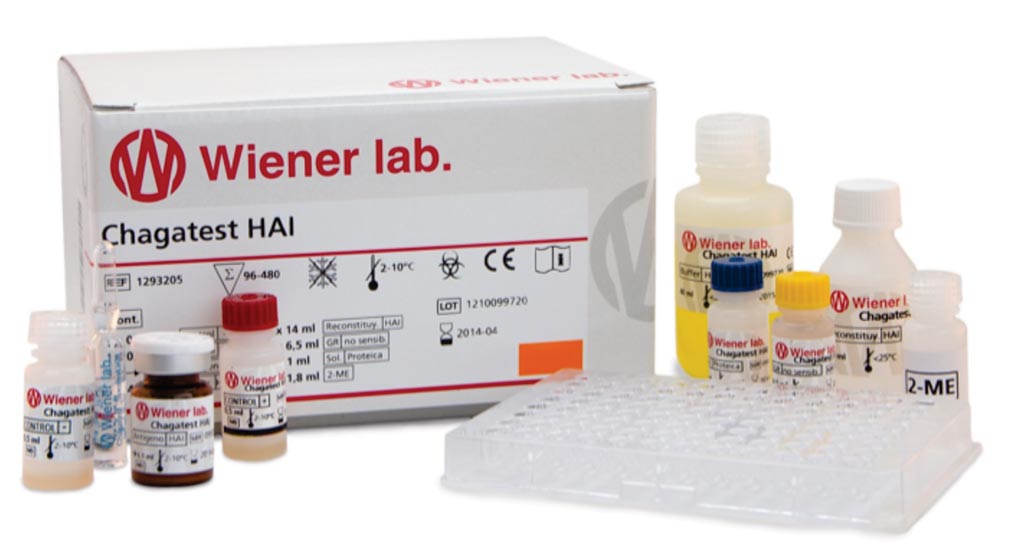 Image: Indirect hemagglutination test for the detection of antibodies against Trypanosoma cruzi (Photo courtesy of Wiener lab. Group).
Chagas disease (CD), caused by the protozoan Trypanosoma cruzi, is a vector-borne infection of significant public health concern in Latin America, where nearly six million people are infected and 70 million are at risk of infection.

Up to 99% of CD cases in the Americas and more than 90% in Europe are undiagnosed. A key barrier is the complexity of the diagnostic process, which is hampered by the lack of a gold standard, availability of multiple types of assays with varying sensitivity and specificity, and the sheer difficulty of detecting the parasite in the chronic phase of the disease.

Scientists associated the Colombian National Institute of Health (Bogota, Colombia) used a panel of 501 serum samples obtained from whole blood and the samples reflected a broad spectrum of CD patients in Colombia. Patients ranged in age from 1 to 81, but only seven were under 18 years old. Mean patient age was 39.3 years and was younger in blood donors (22.3) than patients tested in public health laboratories (49.4).

The authors concluded that their study demonstrated the utility of systematically evaluating T. cruzi assays, using WHO standards, to validate national guidelines for CD diagnosis, strengthen quality control of diagnostic tools, and promote international standardization. A simplified testing process with two commercial assays could perform comparably to the previous process, reducing cost and accessibility barriers and facilitating national scale-up. The study was published in the October 2019 issue of the International Journal of Infectious Diseases.