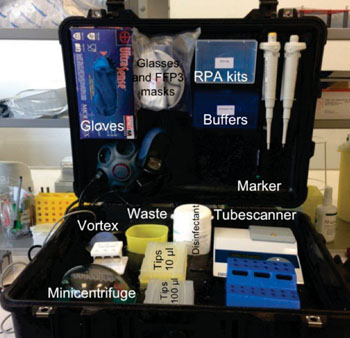 Transmission of Ebolavirus disease (EVD) occurs almost exclusively from human to human by direct contact with body fluids of symptomatic cases. Consequently, the control strategy for EVD epidemics relies on early identification of EBOV-infected patients and corpses for, respectively, isolation and safe burials.

An international team of scientists led by those at the Institut Pasteur de Dakar (Dakar, Senegal) evaluated a new nucleic acid extraction kit on sera and swabs in combination with an improved diagnostic reverse transcription recombinase polymerase amplification assay for the detection of Ebolavirus (EBOV-RT-RPA) that was compared in parallel to other methods. Serum samples from acute cases and cheek and tongue swabs from deceased were collected. In addition, following an upsurge of EVD cases connected to funeral rites, oral swabs from all deceased were tested at the morgue.

The EBOV-RT-RPA was evaluated in comparison to two real-time PCR assays. The prevalence of EBOV in the swabs tested was 12.9%. The day of death after onset of disease peaked at day 6 (range: 2 to14 days) in the group of 67 swab-positive deceased for whom disease symptoms were recorded. Of 928 post-mortem swabs, 120 tested positive, and the combined SE and EBOV-RT-RPA yielded a sensitivity and specificity of 100% in reference to one real-time RT-PCR assay. Another widely used real-time RT-PCR was much less sensitive than expected. Results were provided very fast within 30 to 60 minutes, and the field deployment of the mobile laboratory helped improve burial management and community engagement.