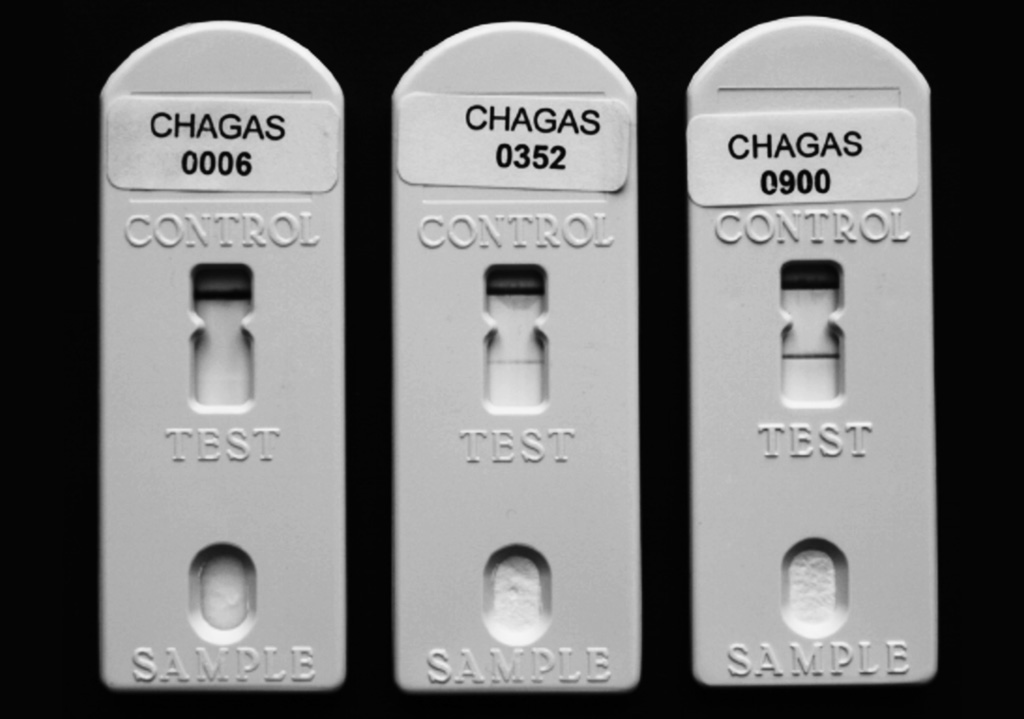 Image: Examples of negative and positive Chagas Stat-Pak RDT results. From left to right, negative, weakly positive, and strongly positive Stat-Pak results are shown (Photo courtesy of Yves Jackson)
Chagas disease, caused by infection with the protozoan parasite Trypanosoma cruzi, is the neglected tropical disease exerting a highest burden in the Western hemisphere. It is estimated that there are around seven million people affected worldwide, the majority of them living in Latin America where the insect vectors that transmit the infection are endemic.

Methodologies used to diagnose T. cruzi infection largely depend on the disease stage status. In the acute phase, the levels of parasitemia enable direct detection of the parasite either by parasitological or by molecular biology techniques. Parasitemia becomes low and intermittent in the chronic phase, but the acute infection triggered seroconversion and anti-T.cruzi specific immunoglobulins are detectable for years, so the chronic stage can be indirectly identified by serological methods.

A team of scientists led by those at the University of Barcelona (Barcelona, Spain) evaluate an alternative algorithm for the conclusive diagnosis of chronic Chagas disease based on the use of rapid diagnostic tests (RDTs) in a field study made in the Chaco region of Bolivia. Enrollment was prospectively offered to all patients >1 year old that had not been previously treated for T. cruzi infection. The team used the Wiener recombinant and Wiener lysate antigen ELISA tests (Wiener Laboratorios, Buenos Aires, Argentina) as described previously. In case of discordance between them, a third ELISA test was used (Chagatek, Laboratorio Lemos, Buenos Aires, Argentina). Sera were obtained by centrifugation of coagulated whole blood obtained by venous puncture.

The scientists also used the RDTs: Chagas Stat-Pak (CSP; Chembio Inc., Medford, NY, USA) and Chagas Detect Plus (CDP; InBIOS International Inc., Seattle, WA, USA). In case of discordance between them, Wiener Laboratorios’ WL-Check RDT kit was used. All three RDTs were performed simultaneously with a tiny volume of whole blood obtained by finger prick. Study sampling and testing were made between April 2018 and August 2018. Upon applying inclusion and exclusion criteria, 685 subjects were finally included.

Overall, prevalence of Chagas disease in the population under study was determined to be 44.4%. There were 27 samples with discordant results that were subjected to a third ELISA (Chagatek), which yielded nine positive and 18 negative determinations. When comparing head-to-head the level of agreement between the two main RDTs (CSP and CDP), it appeared that both coincided in 93.1% of their determinations. The use of the third RDT (WL-Check) helped to resolve 47 discordant results: 39 of them were determined to be negative and eight were positive. In comparison to the ELISAs algorithm, the combined use of the RDTs provided a sensitivity of 97.7% and a specificity of 96.1%.

The authors concluded that their results support the use of RDTs for the diagnosis of chronic Chagas disease in the studied region, and encourage their evaluation in other regions of Bolivia and other endemic countries. The study was published on December 19, 2019 in the journal PLOS Neglected Tropical Diseases.