Novel Biotech-Based Field or Lab Assay for Detection of Fluoride 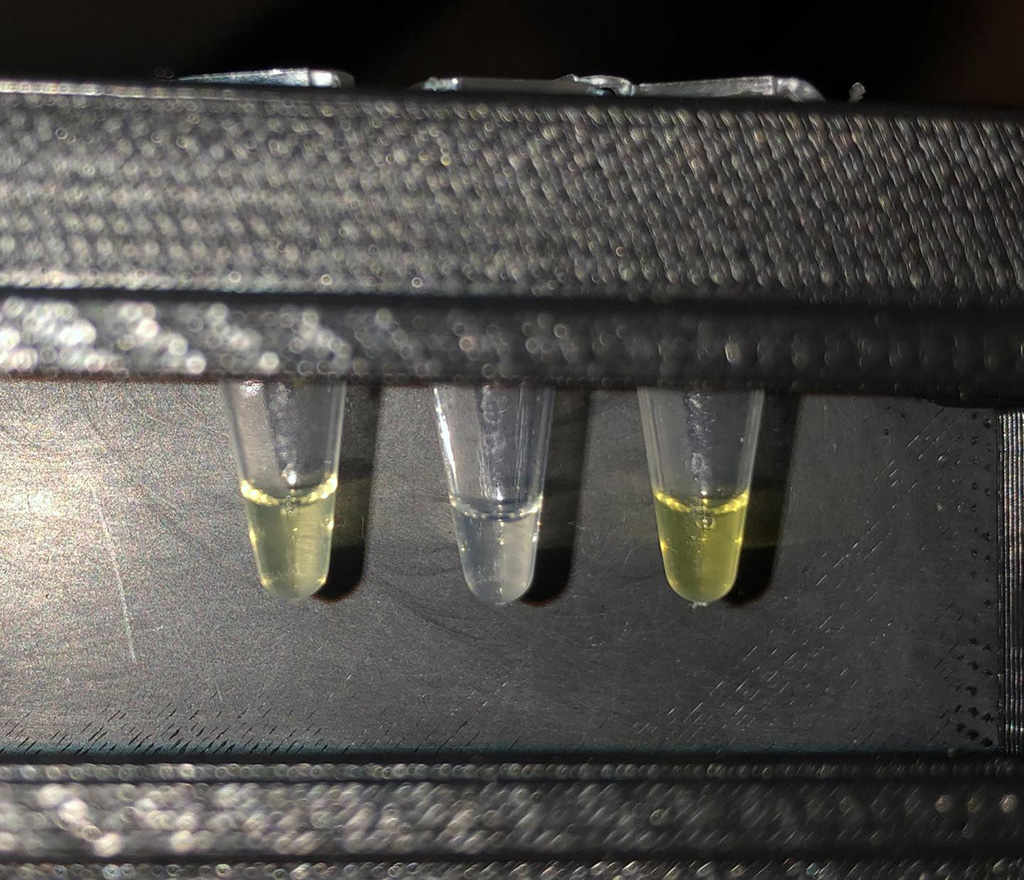 Image: The test tube on the left shows a real positive result from water sampled in Costa Rica. The middle tube is a negative control. The tube on the right is a positive control (Photo courtesy of Dr. Julius B. Lucks, Northwestern University)
A simple, yet sophisticated biotech-based assay for the detection of fluoride levels was successfully tested in the laboratory and in the field.

Around one-third of the human population drinks water from groundwater resources. Of this, about 10%, approximately three hundred million people, obtain water from groundwater resources that are heavily contaminated with arsenic or fluoride. When consumed in high amounts over long periods of time, fluoride can cause skeletal fluorosis, a painful condition that hardens bones and joints.

Current laboratory methods to measure fluoride levels in groundwater are expensive and time consuming and may not be available in developing countries. Investigators at Northwestern University (Evanston, IL, USA) suggest replacing this methodology with a rapid, easy-to-use, inexpensive biotech-based assay.

This assay comprises a biosensor consisting of a cell-free system containing a DNA template that encodes a fluoride-responsive riboswitch, which regulates genes that produce a fluorescent or colorimetric output. A riboswitch is a regulatory segment of a messenger RNA molecule that binds a small molecule, resulting in a change in production of the proteins encoded by the mRNA. Thus, an mRNA that contains a riboswitch is directly involved in regulating its own activity, in response to the concentrations of its effector molecule. In the current assay system, the presence of fluoride causes the RNA to produce a protein enzyme that makes a yellow pigment that is readily visible to the naked eye.

Senior author Dr. Julius Lucks, associate professor of chemical and biological engineering at Northwestern University, said, "RNA folds into a little pocket and waits for a fluoride ion. The ion can fit perfectly into that pocket. If the ion shows up, then RNA expresses a gene that turns the water yellow. If the ion does not show up, then RNA changes shape and stops the process. It is literally a switch."

Reagents for individualized tests may be lyophilized for long-term storage. Following reconstitution with 20 microliters of liquid sample and incubation at room temperature for two hours, the test could detect fluoride at levels above two parts per million, the [U.S.] Environmental Protection Agency’s most stringent regulatory standard, in both laboratory and field conditions.

The prototype assay was successfully tested in Costa Rica, where the Irazu volcano causes heavy contamination of the groundwater with fluoride.

"In the United States, we hear about fluoride all the time because it is in toothpaste and the municipal water supply," said Dr. Lucks. "It makes calcium fluoride, which is very hard, so it strengthens our tooth enamel. But above a certain level, fluoride also hardens joints. This mostly is not an issue in the United States. But it can be a debilitating problem in other countries if not identified and addressed. Every test on these field samples worked. It is exciting that it works in the lab, but it is much more important to know that it works in the field. We want it to be an easy, practical solution for people who have the greatest need. Our goal is to empower individuals to monitor the presence of fluoride in their own water."

The fluoride detection test was described in the December 13, 2019, online edition of the journal ACS Synthetic Biology.